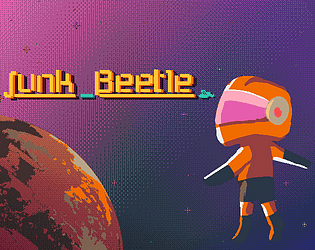 In most games, being a scavenger is not the most interesting job. But not when it's in SPACE !

Jokes aside, the art is great and the gravity gun is really satisfying to use. I know there is no sound in space, but at least a little bit of sound design would have been welcomed.

I liked all the weird stuff you could find around the ship (random debris, people trapped in ice, nuclear warheads, ...).

I though it weird that once you are falling over a certain speed, no matter how much you use your jetpack, it doesn't help you get up... Just a thought...

Thank you for rating our game! We've got a little too ambitious and some things (like the sounds) ended up being left out. Other comments also talk about the jetpack, and yes, it definitely needs some optimization.

We also wanted the junk to be very interesting to the player, so we've added as much variety as we could.

The joke is fair enough lol

Really cool game! I wish there'd be some directions, but once I figured out there was a jetpack feature, it came together. Beautiful art! Couldn't figure out the jukebox control yet.

We're glad you enjoyed it and found your way, the level design and overall control needs some adjustments.

I'm not sure what you mean by jukebox control, but I'm assuming you're confused about it stopping when you're outside the ship. We wanted to play with the idea that there's no sound in space, so you actually can't play it outside as of now. We still have plans to incorporate that idea into the game while still giving the player some audio flavor during gameplay, but it really is a work in progress.

The music that plays in the Jukebox is "Land of 8 Bits" by Stephen Bennet, but we plan on giving more options, and original songs may happen at some point.

Thank you for playing~!

Hmm, I couldn't hear the jukebox at all on my computer. Perhaps a problem with my laptop, then. I had sound from some other games, but not yours. Will you be working further on this? I like where it's headed a lot.

Well, that is strange. The jukebox works by pressing UP when it lights up, if that's not working, then there's something wrong... It seems to be working, but we'll look into it.

The game has no other sounds aside from the jukebox, but we'll add indoors sound effects and a few subtle noises for the outside section. That was the initial plan anyway, but we didn't had time.

And yes, development will continue. When that happens, things like the currency and the machines inside the ship will finally have a purpose.

I think I've followed the username that posted your game here. I'll watch your career with great interest!

Nice game! The gravity gun mechanic was really fun, particularly when I realised I could jump on space junk, and the jetpack helped significantly in maneauvering. The art was great, and I particularly loved the giant star/planet and the little stars that you could see in the background (they also helped me get back when I was lost). I don't know what the things inside the ship do (they lit up but I couldn't figure out how to use them), so I may have lost some content there, but overall a really good game.

P.S. why are there humans trapped in ice and ginat stone dogs floating in space, and more importantly why am I allowed to sell them for cash?

The things inside the ship were supposed to give you options on a few upgrades, as well as giving you access to new areas and tasks. These features couldn't make it in time, so for the time being they don't really do anything... The jukebox works tho!

There were a few ideas we brainstormed for the story. Since it also couldn't be done in time, we dropped the narrative completely for now, then repurposed everything we could use as "trash"... So... Uh.... Don't worry 'bout it, if you find something too absurd that you can sell as trash, is probably a just place holder for now, hehe... ,:)

Thank you for your feedback, we plan on doin more with this in the future!

You never know what you can find in space!

what else do we needed...

Holy wow this was smooth.

Boi or girl... this is high,...damm setting bars high for the jam

COOL, ASWM,...running of words for the art and mechanics...

A lot of good things in this game, and before I continue I need to ask about the dog(s) what, how and why.

The game is really cool but I feel a few things are dragging it down, for starters the music from the  jukebox doesn't transition to the outside of the ship making it very quiet. I also couldn't get two machines to work on the ship I think one was to pilot the ship and i'm not sure what the machine next to the jukebox was. I felt this was going to be a narrative game game but I couldn't find anyone that wasn't trapped in a crystal and I don't know if I can even spend the points you earn.

That said the game is really nice, though I personally wouldn't agree with the tile map choice for floating debris it was cool the idea of going through space collecting trash and then turning it into something has a nice green feel to it but with the endlessness of space it makes the journey feel endless, like our character struggles against all odds in a task that is far greater than they are. The game is also very pretty the background and the ship look stunning. Overall good job to all of you.

Thank you so much for your feedback!

Well, I think is quite obvious that we might have aimed for a few things far greater then we could actually achieve in so little time, which, ironically, somewhat reflects that narrative aspect you just mentioned. We had some ideas for the narrative, unfortunately, we didn't have time to properly work any of them into the game, which also can be said about shopping and going to new areas with the ship, and that's why the printer-shop and the cockpit aren't working.

As for the floating debris, I'm not sure if you are talking about the visuals or the design of it, so I'll answer both.
They were made to give some amount of direction to the player, just so you don't go place to place aimlessly, but since we were in a bit of a rush, I ended up failing on giving it enough of purpose, shape, or challenge. I did want to give it some variation rather than "Another rock, but this time, blue", as well as tweaking the sprites to better fit the tilemap. We ran out of time...

We plan on continuing to work on this project, so we will definitely take critiques into account.

I see those design decisions do make sense now and it's a bit sad that these aspects didn't get worked on due to time as I felt it had some amazing potential in this jam. However I would like to ask again about the dog. I need to know, I couldn't stop laughing when I saw them.

The Dog is the last remnant of dog memes in the far future, where cats have taken over

I loved the style, especially inside the ship, it reminded me FTL but nicer. Also the splash screen is really awesome. Out of the ship I enjoyed a lot the physics with the platforms, it's great concept. The jetpack is a bit tedious to control though.

Thank you for your kind message, the whole team appreciates. ^^

As for the jetpack, I perfectly understand. This is due to a TINY mistake in cooperation between me (main designer) and our main programmer during the last few hours, so we forgot to actually apply a few physics settings that would probably make controlling the character outside the ship a whole lot more enjoyable... so I apologize, that one is mostly on me, hehe...

Again, thanks a lot!