A detailed sci-fi metroidvania!
Submitted by JUSTCAMH (@justcamh) — 2 seconds before the deadline
Add to collection 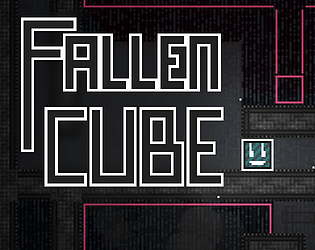 Pretty original twist on the 2D platformer, loved the idea at first but the delay on the jump + rotating controls makes it pretty hard to get around. Beautiful graphics, cool story, nice companion, definitely on of the best games in this jam.

Everything is pretty great. The only thing I have to complain about is how you need to change your module. Pressing E each time, then enter, move the module to the side of the cube where you need it, it feels bad. Otherwise, music, art and story are all good, I will maybe come back to it. Great job!

I love the game and I will definitely come back to it. I hope to finish it within next few days. The art, story and sound are just brilliant. There are however some minor tweaks that could be made:

2. This is something I already mentioned - would be awesome to have a quicker way to work with modules. Maybe something like 'stuck to bottom' thing that would help keeping the jump module in the direction that allows to jump always. I understand the design is related to 'right calculation' BUT I am still able to change the module position - even in the worst situation, just it will be painful and time consuming.

No other downsides really besides those two! :)

Very fun! I love the unique take how tools are used. I also enjoy the exploration required to progress the game. Finally, the game flows well without too much dialogue.

The game is quite polished so my only complaints are nitpicks. First, if you wanted to continue improving the game, I would definitely watch some people do a full play-through. I was unable to finish the game due to getting stuck on where to go next, and I imagine that it could happen to others as well. Further, there are a couple of sections that are overly difficult. I believe that watching player's reactions would help smooth this out.
Oh, and the sound effects might need a little better mixing. Some are jarringly loud.

Otherwise, fantastic job! I had a great time playing the game.

Thank you for the feedback! Would you be able to describe a couple of the spots that you got lost / found it too hard? Also, were you using the map (with tab) or did that not help you find your way? Did you perhaps need a reminder that that existed?

I got stuck in the electricity area, even when using the map. I thought that I had thoroughly searched the area, and the map didn't seem to show the rooms I was discovering.

Some of the areas with a ton of lasers are quite difficult, but I think the toughest part is the long corridor with the electricity on the floor. I was frustrated by trying to avoid that bit and leave the area.

This character control scheme is ridiculous and I love it. My only complaint is that the controls change as you rotate, instead of staying where they were assigned (I assigned the push module according the player's face, so that I could push up to jump etc). I get that could be one of those 'player preferences' things.

Love the polish with the lighting and all the little camera effects (health being indicated by the music was a brilliantly intuitive touch).

Putting the ability menu on Escape also makes it pretty unclear how to actually exit the game if you're playing fullscreen; I wound up alt-tabbing out.

The character dialogues are also calling out for a 'continue' button to advance to the next text, instead of waiting for a fixed amount of time. Some of us read quicker/slower etc.

Still though, this is full of potential, and I love how the quirky movement forces you to rethink the typical 2D platformer traversal.

Submitted
Lost In The Woods
LikeReply
Moisés PeláezSubmitted3 years ago

I find the character too hard to control and to get used to but this game has great quality. Nice sound design, music and animations. I think is an excellent work and is very polished.

Thanks for the feedback! Any suggestions to improve the controls? I understand that it is tough to master, so what do you think I could do to fix it, other than scrapping the whole rotating system?

I think the cube rotating system is fine, I had more troubles was assigning the jump item.

I think it could be improved this way (just my opinion): with keyboard could be Tab or Left Shift + one of the arrow keys to select the specific item and WASD to assign it to the position (without having to freeze/pause the game). Same thing with a controller but with L1 + A, B, X or Y and the D-Pad.

Great work, i like the concept, but the maniability needs some time to get acustomed. I got the 2nd jump module but get stuck a few screens later where there is 2 moving platforms, vertical and horyzontal.

Thanks for the Linux version :)

Can confirm that that part works, you just gotta use the grip claw module found in that room. Thanks for playing =)