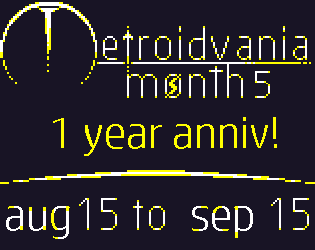 1. Assets should all be made during the jam period (except general purpose code, bases and low-poly models). You can use assets with a free licence or the ones you bought, you aren't obligated to do all.

Games will  be rated on these criterias:

Note: Bugs won't be counted, but if a bug affects too widely one of the criteria (Ex: Gameplay, a bug causes you to not be able to get a key to continue in the game) then you'll get less points on that criteria. Also, I'm the only one judging. If a game requires a controller with more buttons or if there are many entries, I might choose another judge.

To celebrate the first anniversary, I got a prize for the winner of this jam! Thanks to our partner EvilArtBunny, I will be giving 30$ to the winner of the jam! If you're in a team, it will be splitted between the members. You must have a PayPal account so I can give you the money.

Banner made by Zahran Worrell

Elengrad
Travel through beautiful and diverse land of Elengrad to discover what mistery led to series of terrible events.
Xiris
Platformer
Play in browser
The tale of Yu-Jin
Rud156
Adventure
Fallen Cube
A detailed sci-fi metroidvania!
JUSTCAMH
Adventure
Emily's Journey
Third person metroidvania
Moisés Peláez
Adventure
Chuck, The Adventures of Sir Charles the Small
I3uckwheat
Adventure
Blue Moon
Play as the fallen Moon and reclaim your place with the Sun in this Metroidvania.
ChaosComposer
Platformer
Asphodel Meadows
Death awaits you
Merly23
Platformer
Lost In The Woods
The forest is dark and not full of terrors because they haven't been implemented yet. Have fun anyway!
Guessy
Adventure
Transmission Incoming
A small sci-fi themed metroidvania but not quite finished yet
Tomkai
Platformer
SblorbKiller
You are a space technician sent to far away automated space station.
nealith
Action
The Pact
Kur0mega
Platformer
Metroidvania-Wizards
Cschlaefli
Infinity mind
Vollaro
Adventure
Play in browser
SpaceVania
BlunT76
Shooter
Play in browser
Forest Child
A small game about being lost in the woods.
DarbyAnderson
Adventure
Pepeg
Mekyi
Platformer
You Have Seen It All
Gabriel Diaz
Dog Girl
Galo
Iasmite
Submission for the MetroidVania Month 5 GameJam.
HSmileyFace
Platformer
Miau: A To-Be Metroidvania
KingRustyOfXlan
Adventure
powered by