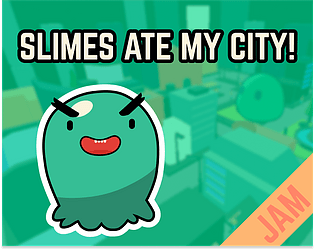 Was expecting a fun time from this, and was not disappointed! Loved the slime player, and it was very fun running away from police while still trying to find things to eat. Personally I think you could've done without the shooting, since it wasn't perfect and in the end didn't seem worth it either, the police took too many hits to go down and there were better things to eat. What I think you should have done, though just a suggestion, was have the slime just try to avoid the police and grow bigger to a point where they were able to eat the police, and have the threats grow in scale too since a policeman doesn't really any damage after a certain size. Oh, and I would also suggest having a "game won" or something like that when all buildings and everything are eaten, rather than just having the player ride out the rest of the time eating police and be met with a "game over" screen that makes them feel like they failed. And the growing animation could be slower or more subtle since after a certain size it's more like the slime is constantly pulsating. But these are all nitpicks, great job with the game!

Great little game! The music was a bit quiet at the default, some of the building sizes that I could or couldn't eat were a bit random, and the concept isn't all that original, but the graphics were nice, the tutorial was well done, and overall the game was challenging and fun, well done!

Great game, lots of fun. Art style all works together well. I agree with people saying there should be more to eat. If you get small by shooting too much early on, there isn't much to eat to get big again. Also, I think it would work better if you shot at where the mouse is pointing rather than where the character is pointing.

Submitted
This Box Is Just Right
LikeReply
NemoSubmitted1 year ago(+2)

Very nice, I like it a lot. It was a bit hard to get big because there isn't much to eat at the stage, I would love to eat the buldings and the lamps to so it will be more balanced. great job!

Submitted
Up We Go!
LikeReply
franopxDeveloper1 year ago(+2)

Actually, you can eat almost all of the stage, including buildings and lamps :o

HOHOHO I just enjoyed this one a lot! My huge record is 47Meters! Also the goddamn police is so annoyinggg.

The Art is so cool, the mechanics are fantastic..  Just Great job here!

I like that I got too big to be shot hahah it was fun to play. I'd recommend to add tanks, helicopters and stuff like that if you intend to keep working on it.

Beautiful art style, that slime is just too adorable

Super nice, funny and addictive, I gave 4 to all criterias! Great Job guys.