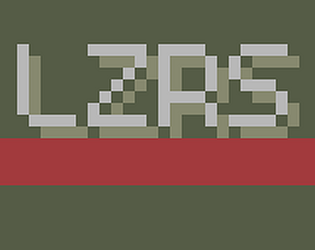 Fun, challenging game! I included it in my compilation video series of the Low Rez Jam games, if you would like to take a look :)

This game brought me back all the way to 1987 - the Energy Zone leve of the original Contra. Me likey :-D

Good job :) One issue I had: the screen scrolls down when I press space, so I had to zoom out really far to keep the canvas in view. Weird :/

Nice game, simple but interesting to play over and over even if keep dying. Really cool game that can have easily hundreds of levels for long entertainment.

This is one of those "simple concept - fun game". I didn't like the collision detection, one one of the levels, I wanted to jump right between the floor and ceiling and I could do it very rarely. So sometimes I stuck. Also it would have been good to make the laser cannons some different tiles, but it's actually not a big issue, after a little observation, it was clear where they're coming from. I enjoyed the game in overall, the pacing was good, the levels are small enough to try over again and again and again after many deaths without any frustration. Maybe a smaller collision box to the player would have helped to avoid those questionable sticking, and not able to fall down or jump between things.

The game kinda reminds me of that level from Megaman. (Don't remember which stage though, but has similar lasers and had to go down quickly.)

Submitted
YAZG - Yet Another Zombie Game
LikeReply
subpixelSubmitted5 years ago

I really liked the quick retry there, that made me stick to getting to the end. Thoroughly enjoyed myself, really like the elevator music in there too.

The try-and-die-iest of try-and-die games :) Fun! The controls feel a little bit wonky; sometimes I wouldn't be able to jump and it wasn't clear why. Fun, though, and I won after only forty (!) deaths.

Submitted
Have you seen this image?
LikeReply