Submitted by Essojadojef (@essojadojef) — 1 day, 18 hours before the deadline
Add to collection 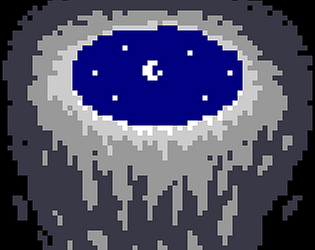 What a fun idea! There have been lots of games in this jam which have done well despite the 64px limitation, but this is the only game I've seen which thrives upon that limitation and actually puts it to use. The spider's path being much more complex in a way that the person doesn't see, because it's too small for them to notice, is a really clever way to take advantage of the limited size: if you've not got much space, zoom it up even further and show all the hidden detail! Very impressed. I also like the graphics; the spider is cute, despite being only six pixels. Evocative. If I have a complaint, I'd say that the difficulty curve is quite high; the first couple of tutorial levels don't show any complexity but instead just explain the mechanics, which is fine, but then the very next level is rather complicated as we suddenly introduce the idea that the spider's path is very convoluted. This is not helped by the spider's physics; it can walk over gaps or fall in an arc as long as it's moving fast, but I didn't realise that for ages because when contronted with a puzzling path I move slowly to explore different details. So I kept falling through gaps, and assumed that the goal was to work out how to approach the other side of the gap from a different direction, not that the gap isn't meant to be a barrier at all as long as you're walking at speed when you hit it. But these are small issues; the concept here is great, and I like this game a lot.

This is such a good idea I really enjoyed playing this! loved switching between the characters and the music was great. Nice work, would love some more levels :)

Oh, I really liked the style! It does feel like one of those old school side-scrolling adventures, not only in graphics, but also sound!

The way you handled level design was great, and I really enjoyed playing from both perspectives! Congrats on your game! :D

Great idea! I think you could do a lot with this. Are you going to add more rooms after the jam?

I have some levels in mind already, and a few ideas to expand the gameplay and the story ;)