You appear in a place you don't know, with no memories. Find out what happened.
Submitted by AngelRDev (@AngelRDev) — 1 hour, 41 minutes before the deadline
Add to collection 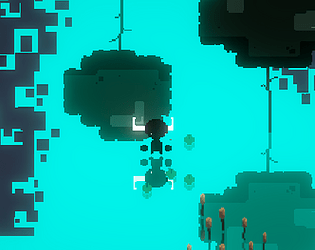 I enjoyed what I played of the game however there were a few things that dragged the experience down a bit. One was the bad grammar which ended up with a choice that was either buggy or but thou must situation (which begs to ask why a choice was even given). See, I would have picked one side however both choices were labelled as the other side so I ended up picking the side I wouldn't have normally picked.

That aside, the graphics were great - they set a lovely tone and the music really helped keep that tone interesting and alive. I didn't run into the issues that others seemed to - that is, not being able to see the projectiles and/or having stops and starts, however I found the boss a bit too hard to deal with, personally. Then again, I'm not a big bullet hell player so...

Hey, thanks for playing it! About the choice, it wasn't bugged but there was only one because there was no time for making a battle with the BigScaryDude. Sorry for the robot battle being hard, can't be sure how hard it would be for people without playtesting from others, but most people finding it hard :\

Wrote a FAQ since problems most people have are all the same (https://angelrdev.itch.io/truth)

By the way, if you could please add https://hugues-laborde.itch.io/ to the youtube description video would be nice.

Ah, that's a pity that there wasn't an actual choice. I felt bad trying to take out Robot (key word trying. He's hard! XD ) Just goes to show that playtesting (and getting different testers) is a good idea when you're not sure of how hard something is, but either way it was a good game.
Not sure what the link is for but I added it to the description of the video anyway.

Yeah, playtesting is always needed. The link is from the artist of the game :)!

Sadly my computer is so damn potato I couldn't really play it on my browser. But I must say I love these pixel graphics. Really suits my taste haha. I love the overall vibe you have going for this.

I really think the game should run in most pcs (which pc you have?), you might wanna try downloading it and choosing a lower screen resolution, hope it works.

Thanks for the tip, I didn't realize there was a download since it linked me directly to playing on browser LOL. I tried using the zip file and it played fine. I really liked that walking on water reflection scene, and the pixel screen transitions. It looked really professionally done.

I apologize for repeating what the usual comments have been saying:

The visual design is mostly amazing, with only the obstacles needing more contrast from the background to indicate their position better. Many times, my deaths felt at the fault of design rather than my own skill. For example, there's a bug on the web version that halts the player's movement if they click too often. Considering clicking is a core mechanic in the combat, I felt annoyed at times. I know this competition had a short deadline, so the music was actually great and I see a lot of potential in the complete aesthetic. I would have appreciate a few sound effects to really make each hit feel like it had more of an impact.

I believe I may have gotten more out of it if I had downloaded it instead, but in total, I believe this is a fantastic entry. I would appreciate any feedback on my entry as well!

Haha, don't worry. I'm thinking on creating some kind of FAQ since most critiques are on the same aspects. About the clicking problem, never happened to me, maybe it is just in web, will try to recreate it.

I'll give you feedback in your entry later today and thanks for playing our game.

The visual and sound are really great!!

Thanks! All the art was done by https://hugues-laborde.itch.io/.

Saw this game on the yourbr0ther stream! super slick looking. looking forward to trying it out myself!

Looking forward to hear your thoughts on it!

Super good, I love the fog of war mechanic! GG

Thanks! Glad you liked it (was the easiest thing to made in the entire game haha).