Submitted by Rose_Guardian — 25 days, 10 hours before the deadline
Add to collection 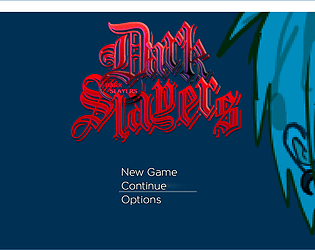 A Review of Dark Slayers by Rose Guardian

By your friendly neighborhood Secret Santa!

This is another IGMC 2018 entry that looks like it’ll be pretty decent from the onset, and the initial impression given is about on-point. While there may be some things that could be improved upon, the base of this game isn’t bad at all. This title has the hallmarks of a game that could grow into something special, custom imagery, a reasonable story, and workable progression/combat. There are a few flaws, of course, but that shouldn’t stop anyone from trying this title out. All said, a game at it’s core is supposed to entertain the player, and this title does just that.

What struck me first was the characters that are obviously hand drawn. Little did I know that the custom artwork wasn’t going to stop at that. No, no, no, the maker included custom images to help drive the story by using custom images to tell the story through imagery. Due to RPGMaker games being so text driven, it was a breath of fresh air to see a little emotion carry through from images. The text boxes, the battlers, and even the side-view battlers are all given a sprinkling of the custom artwork too. In every game, there is usually a little of the maker’s soul; here, it’s in the artwork. I truly enjoyed this part.

The story is fairly well told; though it does have a smattering of grammatical errors and a couple of logic jumps. Still, for a game that on the surface is reminiscent of the Devil Hunter series, it’s done well with the short time allowed for the story to play out. What I liked most about the story is it doesn’t feel like an epic; rather, it feels like a novella, or maybe a pilot episode for a television series. This is far from a bad thing, as it allows the player to enjoy the story for what it is. This is not to say that there aren’t any issues. The issues, however, are not big enough to overshadow the story itself. P.S.: I also really liked that some side-quests were included.

The combat is well done, and time was spent to get the balance to work. Now, it’s not perfect, as I never felt that I was having to overcome a massive obstacle when fighting. For those not used to turn based combat, the difficulty would likely feel a bit more aggressive. The combat was made especially fun when a boss was the hand-drawn battler. I cannot emphasize that enough, I loved those.

In closing, the game was enjoyable. I can nitpick away at the mapping (too much negative space, particularly with interior zones), grammar (commas are “frenemies”), and the like. Those improvements will come with time, and I hope the maker does spend the time to make adjustments. I really feel this entry has potential to be really fun for quite a few people-myself included. Bravo Rose Guardian, bravo.

Thank you. I am very glad you enjoyed it.

I liked the painted scenes, maps. Battles were not too easy or hard that was good but I couldn't find big difference between attacks.

Thank you for your feedback. I'm glad you enjoyed it.

One thing I forgot to mention is that it was surprising the boys were carrying sword and gun at the start of game.

Yeah I should fix that after the jam. Thank you.

If you made this a dating sim, I would be so happy.

I'm still glad you enjoyed it though. I am more of RPG person to be honest. :)

I am in love with how you wrote your characters. So well done.

Thank you very much.

Da cat at the beginning shocked me! Haha!

Yeah it tends to have that effect on people :)

I just want to point out. Skills that say they cause status effects on enemies only have a chance of causing the effect it doesn't mean it will. Also boss enemies are immune to status effects such as frozen, paralyze, and silence on purpose, because I didn't want the bosses to be defeated that easily.

Sorry for posting again. I just want to let everyone know I had to fix a mistake where Heal Well did HP damage instead of recovery.

A simple game with great artwork. Has some balance issues (like a regular attack sometimes does more damage then a special, and Chris just blew me to hell) as well as some grammatical issues. Maps are well done, if a little spaced out at times.

Thank you for taking your time to play my entry. I really appreciate it.

It is a fun little game! Very entertaining story! Looking forward to seeing more of it.

Thank I am glad you enjoyed. I uploaded a new version with more length, and fixed somethings.

Please do, not be afraid to leave feed back if, or when you give this game a try. Also I want to note something to the judges. Quests for the quest command don't open up until Chapter 3. I tried to hide the command, and it didn't work.