My entry for HeartGameJam 2018
Submitted by fossegutten (@fossegutten) — 13 hours, 4 minutes before the deadline
Add to collection 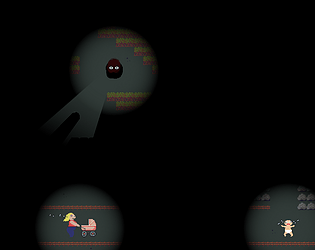 Team Members
Only me

Really cool lighting system, it's nice that the player is the monster in the darkness for a change. It isn't really anything more than navigating through a maze under a certain time period, but it's good that you presented it in something more interesting.

There's a misspelling in the intro screen.  Game's also really, really short; I failed the first time  (only just barely), but beat it the second time, since I knew the layout of the level by then.  Not much point in playing again, I doubt it would've taken me long to find the shortest path, the only remaining challenge.  I think it's not a bad concept but it needs more content.  I also dislike that its difficulty is founded in fumbling around in the dark more than anything; even if there was more content, it would revolve around me either getting lucky the first time, or remembering the layout the second time.  Maybe more interesting obstacles could be added to give some thrill to the experience, more resistance to the evil baby-eating spectre, like angels trying to stop him perhaps.  Could make the darkness his advantage and give it some stealth elements.

Thanks for your input, I agree that it could use some more levels and challenge. Was planning to add hazards like spikes and other traps.

I liked the dark humor. Unfortunately when running the game (in windows) the window did not display correctly, it appeared partially off screen.

Sorry to hear that. I will try to fix this issue for my later projects

Is it wrong that this game made me hungry?

Fairly simple. It'd be nice if you made more levels than just one. By the way, good work on the particles and lighting.

Thanks, I think i only spent around15 hours on this game. Wish I had more time that weekend, to add audio, more levels and other stuff :) I used the gamejam as a learning introduction to lighting in Godot. Will maybe transfer some concepts to my main project!