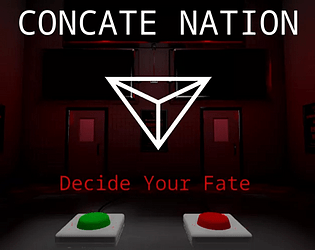 Game description
A nation in chains.

The detail to sound and graphics were great! I would have enjoyed having some ominous track in the background while answering questions.

Would have been nice to get feedback on what your questions did, at least visually. Not necessarily something on screen like ours is. Not sure what, since it's an interrogation. Hard to convey!

Are the questions randomized? I'm playing it through again (this time just letting the timer run out and moving onto the next question), because I think that's how you get the alternate ending? But in letting it run, I'm seeing different questions than I did last time. Is it dependent on which button you click? Curious as our game uses similar event/choices! :P

Favorite sign is, "Loose lips get drill bits" btw. Enjoyed it! Good job. Super happy you found a programmer who could help out.

20 questions chosen totally randomly from a pool of 60. I wanted to have some difference of feedback on each answer but it wasn't in the script and I only had a few days. Glad you liked it!

Ah, I see! Yeah, I let it run in the background, and I got pretty high in the number of questions, so I'm guessing it'll loop forever/until the end?

Fair enough. Still, pretty good with the time you had. :thumbsup:

This one's kinda tricky to critique, I'm not super good at literary stuffs so take my opinion with a grain of salt.

Graphics and sound were amazing, the visuals in the room were impressive and the sound of the chair scraping the floor when you sit in it was a perfect detail.

I think the expository text that just tells you that you're in a fascist, oppressive government detracts from it. Giving the player some context seems important but I think it took away from my curiosity and urge to learn what's going on, since I was just told what's going on. It's really hard to invest someone in their character's stakes in a jam game since we have such little time, so I think the element of mystery and discovery would have pulled me in more.

There still most certainly was some mystery and intrigue which made me read into the questions and characterize this entity holding me captive, I just think it could've been more front and center since I am not too concerned about what happens to this dude I temporarily control.

But again, this is just my opinion and may just be more a reflection of my interests than your creative goal. Overall I'm impressed, I played through it twice and got two of the endings, I'm gonna try again soon to see if I can get the "winning" ending, so to speak

Edit: Also having the buttons be just green and red was great IMO, you knew what they meant most of the time but on a couple questions you weren't sure and it made you feel some extra pressure

Hey, thank you so much  for the feed back. It was rush job for everyone to get the game finished in the little time we had and because of that mistakes were made. I didn't have time to do a text polish to get it up to a standard I would hshaveve been happy with. The first two pieces of text are in fact scene descriptions we never had time to build. Somehow in the frantic effort to get this out in time, it was added to the final game. It should start at the with the introduction to the "Ministry". After the Jam I'll ask for them to be removed. Thanks again for a thorough critique.

No problem. Yeah with jams I generally assume half or more of my feedback is stuff the devs have already thought of, but I figure best to throw it out there so at least they know that others shared that opinion

Smaxbat is right, I put in the intro text and since the script was a bit ambiguous I just went with what he wrote. I was expecting some feedback and changes but we were focused on polishing the game.

in some question, you don't know what is yes and what is no but its fun

We wanted to keep the answers to the questions either positive (green) or negative (red). The whole psych evaluation premise was designed to amplify stress and cause as much anxiety as possible. Thanks for playing, pleased you enjoyed it.

It seems like a really good game, but the english is bad (Edit: actually, only in one place), and some questions are "x or y", and I only have "yes or no" buttons (edit: I have been told that it's volountary, to add more stress). Plus, it's so laggy that I can barely read what it says (I have like a frame every 3 seconds)(Edit: The lo-fi version fixes that). I really like it though!

Glad you liked the game. Immensely proud of what we achieved in the four days we worked on it.