Two robots share one battery to get through the levels.
Submitted by Huscat — 1 hour, 57 minutes before the deadline
Add to collection 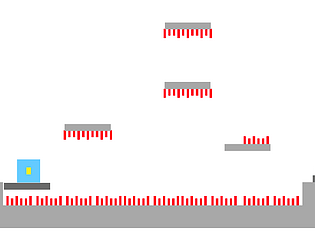 I had problems at the start of the game, got past it without looking at the comments, and am amazed! Love the idea of actually relying in a object just to power up the other robot and throwing it! The only problem though, it's the traction when you stop moving. You want to stop immediately since that will help you when you're at the edge of a platform and not have to die.

Hey, thank for kind words and feedback!
You had some problems at the beginning - are you talking about not knowing how to toss a ball, or was there something else? I want to add a tutorial and it would help a lot if I knew what to focus on. I also intend to remake the whole movement - will simulate friction myself, instead of leaving it to the physics engine, it should make stopping less slippery and walls less sticky.

P.S. Is this Raven on your profile picture? :v

The physics engine, I don't know anything about Unity but I think you could maybe change the friction...

Maybe make the tutorial a bit more clear as to what the robots should be doing, and also tell the player that in order to throw the battery use the mouse and give a visual indicator as to where it is going to go (like an arrow pointing to the mouse, straight from the robot that has the battery).

That profile picture I drew it myself, since I'm an artist who barely draws and programs almost a lot. Planning to be balanced so that I also study art/draw at my free time.

This was pretty damn original, nice.

I can get past the screen where it says two friends were playing volleyball.

Also, holding toward the wall in the middle while in the air will cause the robot to cling to the wall. I can't tell if that's intentional.

Edit: Oh. The other posts appeared right as I sent this comment. I'll try the game again.

Yeah , the "sticky" walls weren't intentional :v . To fix it I need to make the player friction zero and simulate it myself through the code, so he won't stick to the walls but also won't slide when on the ground.

For those wondering, the first level is kind of a semi-tutorial for movement and shooting. If you throw the ball a couple of times or if it lands out of you reach, the next level will be loaded. (You throw with Left Mouse Button)

Maybe not the prettiest game around, but it fit the theme perfectly. It took me a while to understand that you had to use the mouse to throw, but I like the idea of it! The Unity-physics approach to a puzzle-platformer is not always well made, but throwing the battery was actually fun in itself.

I'm very happy you liked it! Thanks to you, I just added "throwing" to the description of button scheme on the game site. If I'll work on it in the future, a proper tutorial will be created.