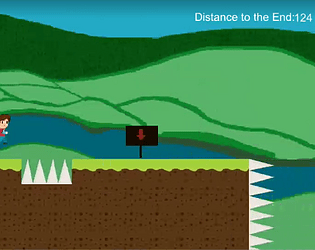 It's a good first game. Nonethe less, don't forget to implement the ending screen. If you struggle with good art, you always can find some great free assets on itch. Keep going further and make more games.

Submitted
One Spear, One Kill
LikeReply
Ankush Rai1 year ago

all the best for the rest fo the jam
return the favour by Trying mine and leave your feedback: https://itch.io/jam/gmtk-2019/rate/431948

It's a fun game with nice music and a good character animation! I would suggest adding some screenshake when shooting and some particle effects when hitting the ground and jumping! This might make the game more lively! Other than that nice game!

Fun game! Sometimes I got hit by spikes when it felt I didnt (you could maybe make the collision a bit smaller to be less punishing), but then again maybe I'm just bad :P I really liked the idea of the game having just 1 key and using it differently in each level. Good job! :)

I was going to review it after only playing the first stage in windowed mode, but I noticed the "Distance to the End" counter I realized I hadn't seen it in my play through due to it being cropped halfway out of the frame by the window. I played the game again and was able to see two more levels!

The jumping feels nice. The shooting takes a bit more time to get used to, but that also feels good once I'm used to it. The randomized sayings on death was a nice touch.

The only thing that bothered me a lot was that if the player dies, they are always sent back to the first level instead of the current level. However, that's not a huge set back. People can play through it.

Why did you say "Do not go to the Credits until you're gameplaying is finished!"? I thought there would be some sort of spoiler in the credits screen. There isn't.

Thank for this comment! First of all I don't know too much about Unity's UI system so maybe there's a problem about that. And about the Credits There's a bug that when you 'Enter' the Credits the game becomes unplayable. The system can't get the Inputs so as a team we decied to hide this bug. :D

I don't think the distance tracker issue is caused by Unity's UI system. It's just the way WebGL displays content. If you're in full screen, it's not noticeable at all.

Good job turning the credits bug into a feature. "I definitely didn't do the same thing," I said, lying.

I like how even though it was a one button game, the different levels used that button differently.  It kept the game from getting too repetitive.  And the visuals and audio were pretty nice.

Thanks for your comment! Actually, at first we tought no one can't find us and we felt a little bit alone but your comment showed up and me and my team get so happy for this comment.