A top-down-shooter where you can do just one action at a time
Submitted by Sorash (@SorashTM) — 5 hours, 5 minutes before the deadline
Add to collection 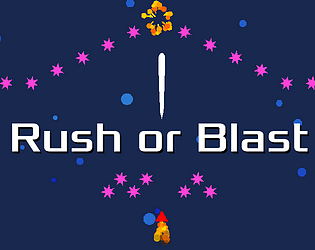 Challenging game!  I included it in my GMTK Game Jam 2019 compilation video series, if you’d like to take a look. :) https://youtu.be/P5BMwIOWTEc

I found the game idea very interesting. In several moments I felt the despair of having to switch on shooting or moving my ship hahaha. Adding better assets will be great. Good work!

I think, the game has a great feel, it's "juicy" and kind of addicting, although i really miss the player's freedom, (which could come the way you splitted the mechanics,) to deal with each obstacle the way he wants to: i tried dodging the red projectiles, but i had to shield, because they track me through the whole game, I tried shielding the pink obstacles, but i had to shoot them, i even tried destroying them with the red projectiles that were still chasing me, but it didn't work.

These little changes could add so much replay value, maybe consider them? :) It would make the mechanics feel more versitile (but then again, i just love sandbox, and if that's not, what you want, so be it ^^) and let the player think more (and feel less like "Simon says: shoot now", if you know what I mean ;) ), while also giving a possibility of making the connections between the parts more significant (for example if you have no time to switch you need to steer through the minefield, which needs a different skill-level)

you see, I care very much for the game, and would love to see you enhance it's potential :)

Thanks for the feedbacks :) I really dig the idea of making it more open, like using the red projectiles to shoot enemies is a cool idea. Also letting the player chose could really improve the game indeed! Basically everything you said is relevant so thank you!

It was fun. Graphics and music meshed well with the game mechanic.
I think it would be cooler if you had to switch in real time without getting slow-mo.

a bit more than 20000 highscore, didn't got to see the exact number, i restarted directly i was already smashing key when i died, that would be the worse thing about the game as the concept and design is very good !

Some more patterns, maybe other actions and it'll make a cool game ;)

Thanks! I definitly agree with you there, the score was kinda added at the end of the jam so yeah, it does restart too quickly. And I planned too add more patterns but I just wanted to post my game (which was a good idea considering itch.io broke not long after...)

This was great, fit the theme damn well, super creative