Platformer with only one platform!
Submitted by Hubble Wubble Studios (@StudiosHubble) — 11 hours, 19 minutes before the deadline
Add to collection 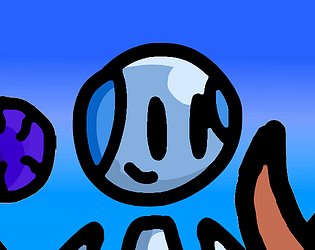 Combination of running using the keyboard while steering the platform in that way is pretty difficult, especially at first, so there's a definite learning experience with this. Pretty original in my experience.

Although short, the level is surprisingly fair to play, to the point where it is satisfying to squeeze through two narrow spikes. Additionally, I feel like I got some great saves catching the robot before it fell off-screen!

Very unique mix of a platformer and a runner game. It is good challenge but it feels a little off because the character is really light vertically but very slow horizontally. I'm not sure how you could adjust that with making the game too unwieldy.  Maybe you could pin the height of the platform so that it only moves right and left so the character movement becomes the focus and the platform is used to catch them. But at that point it would be a different game probably. I liked it a lot though, good luck.

I'm glad you enjoyed it :) I played your game, but didn't quite understand it. I know your only allowed to move in a given direction once, but what's the objective?

The first level is just to get a feel for the controls. It says to press enter to continue. The second level teaches you to go to the goals to win.

Okay thanks. I was able to play it, but some of the text was cut off from my screen. Other than that I liked it. I can see it being a fun puzzle game. Thanks again and good luck to you too!

In this game  you  have only one platform to move on which is controlled by your mouse. You then have to constantly run to the right as the left border of the screen closes in. You have to coordinate the movement of your character with the movement of the platform in order to finish the game.

The graphics are colorful, handdrawn, although the backgroung can be somewhat distracting. My main fault was, that I didn't first read the description of the game, so I didn't instatly realise that I could move the character aswell as the platform (therefore I would maybe advise a better in-game explanation for people like me :D ).

The game is pretty fun, but I think that the character should have a higher falling speed, because now in order to get lower on the screen you have to slow down, which can often lead to inevitable death. This problem caused that I was unable to finish the game.

Overall, not bad, but polishing it more would lead to game being more fun.

I appreciate your advice and will keep it in mind. Thanks for playing the game and I hope your entry does good. Haven't played it yet, but when I do I'll be sure to leave a comment :)