Wander in the dark and you only have one chance to peek.
Submitted by Drowning Studios (@drowningstudioz), y-wanteen, Danielle (@ragasdanielle), joryu — 11 hours, 18 minutes before the deadline
Add to collection 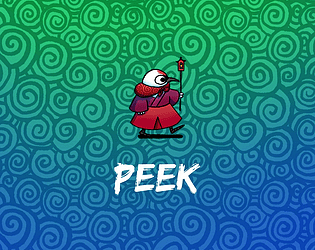 Like the art and nice take on the idea of limited vision.

Neat idea, and I love the main character art. I think my main complaint is that the map is static. It means after revealing the map once, you could memorise and then just play in the dark. Or even if you can't do that in a single viewing, you'll still start to memorise it after a few attempts. I think a procedurally generated map would play very nicely with your core concept, but I can see how that's probably not feasible in a game jam.

Even so, I'm worried that the only reasonably strategy is to wander around in the dark for as long as possible, and if you ever get spotted by a demon, light the torch and try to leg it. There isn't really any reason to light the torch before that, since you've got nothing to lose, and since you can barely outrun a single demon, there's also really no reason not to light it when you do get spotted.

I think giving the player a way to successfully deal with a single demon (retreat to hiding spots; make the demon slower and lose interest after a while; limited combat abilities etc) would fix this issue. Then, when you get spotted by one demon you might think "ah, I can handle this" and keep the lights off. But if during your escape you alert a second demon it starts becoming less clear whether you can still handle that in the dark, or would be better off just alerting every demon but seeing the way out. It suddenly becomes an interesting risk/reward trade-off.

The potench is strong with this one.

As others habe mentioned, I like the peek-idea but you cant outron or trick the demons :D Other than that, walking through the maze feels nice, and the artstyle is great! Really good animation :)

It was kind of unfair that you couldn't outrun the demons if you get spotted while not revealing the whole map. Maybe if the map was built with several premade blocks and assembled randomly, it would've helped to its replay value. The setting was spot-on.
Check our game! https://cerosware.itch.io/one-stick-shooter

Thanks for playing! Yeah, I agree with your point about being able to outrun the enemies. Maybe if the maze walls were more open rather than enclosed if would've given the player more chances to hide. Also, ideally we would have designed more levels if time allowed us!

Super cute bird! Love the mood, graphics, and sound! Wish there was a ninja bird tho!

nice game with beautiful art...….. it will be nice if the range of the light is slight higher