Top down shooter but you have no gun
Submitted by Bonnicus — 27 minutes, 52 seconds before the deadline
Add to collection 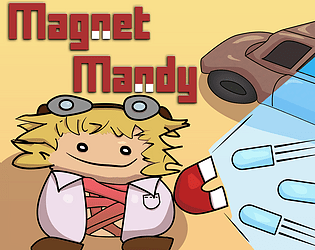 I can understand why people are struggling with the magnetic mechanics of the game. Like others have mentioned , it is not immediately obvious what the effects of the magnet and, whether intentional or not, the first idea that came to my mind is that I would be able to suck all the bullets to my magnet and then release them back when I stopped using the magnet. Again, I can't tell why my mind went that route but it did. Additionally, I do agree that something that lets us know that the bullets are engaged like by slowing them down would make it be a better "game feel", easier to understand, and more fun as it is cool to see bullets slow down in mid-air as I readjust their trajectory. It's that sense of "having power over the enemy" that games like these tend to bring that I feel is missing from this entry. However, the concept is a fun idea and I would like to see some improvement done to really nail the feeling of using a magnetic to attack the enemy with their own ammunition.

Actually the bullets do slow down when you influence them with the magnet. There are also a couple visual effects, but we'll definitely look into making it feel more responsive.

I see, then perhaps it was more of an issue with my eyes not being able to catch it. Yes, it would definitely be a great improvement if it can be made even more obvious  :)

LikeReply
Swords and Flowers2 years ago

Interesting game. Magnet could slow down bullets just a little more to make things more responsive and powerful. At the moment, it feels like the bullets fly through my 'magnet zone' way too fast and I don't have enough time to curve the bullets fully back - which requires a crazy, time-consuming 360 spin back at the enemy. Would also love to see a 'repel' function?

There's definitely some fine tuning to do with regards to the main mechanic. Pretty much everyone who's played the game since we finished has found the magnet difficult to use, which is a shame since it's really fun once you get the hang of it. I'm not sure if a repel function would be a good idea, since that would essentially let you reflect bullets straight back at the enemies.

Actually, wait, could I ask about how long you played the game?

LikeReply
Swords and Flowers2 years ago

About 40 minutes but a lot of repeated sessions.

That's really interesting how much harder it feels to others, even after 40 minutes of practice. Definitely going to reevaluate the mechanic and add some sort of tutorial.

Super interesting concept but I couldn't hit anyone. This is one of those games that I think might be easier the more enemies you have, because you could use it for friendly fire scenarios. But starting with 2 enemies right next to each other, I couldn't bend the bullets enough to get anywhere close to hitting them. I was super proud of myself for even getting them to bend 90 degrees but that's not going to kill anyone except maybe myself.

If you care to keep trying, I posted some pointers in the description. If I decide to polish it up after the voting is over, I'll probably add a tutorial/practice mode.

Interesting concept but it's really hard. I died multiple times and couldn't even hit a single enemy.

Dang. I guess that's what happens when the developers have been unintentionally mastering the mechanics for a day straight and don't have any time to let others test it, haha. Thanks for the honest feedback.

I completely understand, a few months ago there was a game I was working on and I made the first level like an easy tutorial level and then everyone found that too hard, because I had been mastering it as I tested it myself

Turns out it's possible to softlock the game. Heed the warning I wrote in the description.

I also helped make this game

Neat idea, but a bit hard to control. Might be more fun if the magnet worked in all directions instead of having to manually aim it. Maybe the bullets could also have a tad bit of homing when you send them back. Still, I like the idea.