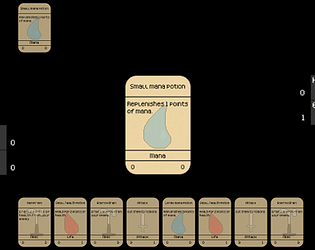 In its current form it is quite simple, but it's easy to see the potential. It needs a bit more feedback to make it more satisfying but it's a gamejam after all so it was wise to focus on the design and gamepay.

I feel it would make more sense to play cards from left to right since cards are aligned that way. The UI could use a bit of tweaking to improve the UX as well.

I think you could expand on the mechanic by making cards that you cannot discard or cards that change the order of cards in your hands. Lot of possibilities !

Hi, thanks for the feedback!

As for the card alignment, I've done that on purpose to make it more visible which card is currently being played (before adding the card in the center). I want the cards in your hand to move and fill the space to the right every time a card is played.

I had an idea for order changing cards, but simply ran out of time to implement it. I thought about adding a card that would swap the next two cards in your hand when played. I also though a little about cards that would influence your opponent's hand, but that will require a bit more time to find a good way  of adding that. :)

Thanks for the comment, I'm glad you enjoyed the game!

i hope you make this a full game!

Not sure if it's going to become a full game yet, but I certainly have a lot of ideas to expand it further. Stay tuned!

This game seems to be easily expandable by adding more cards.

Hmmm it was explained in the tutorial though

I've added the tutorial screens in the last minutes, so they might be a little unclear on that. I'm gonna have to improve them to provide a better explanation. I'm also thinking about adding some sort of marker in the game itself, like maybe an arrow on the right side  of your hand to point out that "the cards are played from here".

As for the expansion, I already have some ideas I had to remove because of the limited time. I wanted to have cards that would buff other cards in your hand (e. g. "reduce the mana cost of next card by 2" or "increase your next two attacks power by 1") and cards that change the order of following cards (e. g. "swap positions of the next two cards"). I also wanted to add minions in some form (e. g. minions played stay on the board and deal damage every turn until killed; enemy attacks target minions first before going back to the player), but I didn't manage to figure out a good (and fast!) way to do it.

Anyway, I've got some ideas for future updates. Not to mention all the improvements I didn't have time to do when it comes to the interface. Or adding things like sounds and music.

If you're planning on expanding the game(post-jam version, or a sequel?), I'd personally suggest having more deck editing or something like that. Right now, both opponents seem to have identical decks, and even though draw and discard piles are shown, they don't seem to be effective since I doubt that any player will be seriously tracking remaining cards, or deciding on a strategy based on them. It would be quite cool if, for example, after winning a battle, you get to add some cards to your deck, change around the card counts etc.

I was thinking about adding some sort of single-player campaign, where you would have to defeat a series of different decks and you would have to modify your deck to counter them, so a "deck building" menu would definitely be there.

This sounds like a great idea. Similar like the Magic MTG 1997 game, where you travel a map, duel enemies and gain their cards to strengthen your deck.

Thanks, I'm happy you enjoyed it!

Very fun!  I intend to play this one again :D

Thanks! I have a couple of things I didn't add to the game because of the time limit, but I'll be definitely updating this one. Stay tuned!

Insanely creative, and you made it work very well, 5/5 Great Job!

Hey, thank you! I'm glad you liked it!