OUT OF TIMEView game page

run and gun the day away
Submitted by LuisMint, SubstandardShrimp — 4 hours, 52 minutes before the deadline
Add to collection 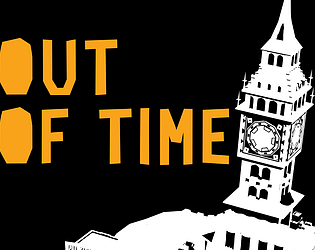 OUT OF TIME's itch.io page

The most fun I've had this jam! The gunplay is great, the guns feel good and the pressure is on! Level design is really nice, sound effects are on point and I like the enemies as well. Trouble is: I can't ever get far because I am always... running out of time. Fitting for the theme, but kinda annoying that I can't kill the guys quick enough to get a time refill. I'd say the time refills are a biiiit too  far in between, or they refill too little. Balancing is usually a problem for gamejam games so don't worry  too much. I had a blast and I'd expect you had a blast making it!

Had fun with this one, even if it didn't run smoothly on my rig. I'm a complete sucker for the sense of speed and momentum you get from this kind of movement, specially with how high you can jump and the fast movement.

UI could be improved, there's not a lot of contrast, specially since the level itself is quite bright. Tying the spawn of the hourglass to the level up was confusing at first, and considering the speed at which you run out of time, let's just say I died a lot, hehehe. Projectile speed should be faster IMO, specially to deal with the flying drones.

I would really like to see this getting developed further. With some optimization and a few other levels and weapons, this could really shine. Awesome entry, well done!

Was a neat first person shooter! It took a little bit to understand what was going on, but once I did it was fun. I don't know if this was intentional, but the crosshair was misaligned (I'm playing on the windows version if that means anything). Overall, good work!

Absolutely love this concept and it's so good to play! It clearly took inspiration from Unreal Tournament and Quake, as well as taking abilities from MOBAs or Overwatch and bullet time mechanics like Max Payne, yet somehow putting them all together worked effortlessly. With more time, some additional levels and objectives and satisfying animations, this game could genuinely go to a full release. Top marks!

Frenetic game, not bat! Maybe too quick? But nice!

Really like the game, especially the shooting mechanics and slow-down mechanic wish there was more time and enemies to shoot. The art-style is amazing! This is an overall solid game that you should totally develop this further. I could see this becoming a really fun multiplayer game, or singleplayer game based around managing your time.

Oh, i had so many nostalgia feelings after this game! It reminds me of good fps times like Unreal Tournament and Quake. Ai is not great but if you are aiming to make multiplayer it should not be an issue. Very high quality work, i like art, sounds, music, player movements, even project page - pretty much everything! So good luck with that one :)

Really love the game nice fps wish there was a bit more time but the shooting feels amazing and the time slow down is awesome lots of features in the game with maybe another level and more enemies this would be an amazing. Overall really solid well done guys!!!

(I haven't got to play yours yet, just a hint, you may want to set the Windows build to be for the windows platform on the itch page settings, currently it displays as only being a linux game to those who are just browsing the submissions rating summary) Will edit comment when I play yours xD

I have memory of setting it when uploading but my brain is very untrustworthy. Toggled it now. Thanks for noticing!