WebGL
Submitted by Sappir — 11 minutes, 23 seconds before the deadline
Add to collection 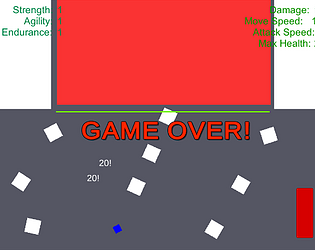 Talking points of your game
Top down shooter. Enemies drop stats. You pick them up and get stronger.

What assets were used?
I used sound from
https://www.bfxr.net/ and
https://www.dl-sounds.com/
Everything else is made by me.

Game has a good concept. I like the ability of bullets stopping eachother and I would love for you to explore that more in depth; take that idea and run with it. The difficulty was fair and made you feel rewarded to try and experiment by protecting yourself by shooting enemy bullets. I had fun but I encountered a few bugs.

For some reason (I honestly don't know what caused it but it might have been triggered after I held down the keys) my movement would do something weird. One time it forced me to go down and the only way I could stop it was by pressing up. Sometimes it would reset after a while but it was really frustrating because one time it made me unable to move out of a corner and then it made me die. There was other time that it would do that too. And I know it's not my keyboard because I've been playing these submissions all day and reviewing them and have had no problem.

Also is my cursor supposed to have that black cancel symbol when I shoot sometimes? Idk what caused it and I'm not sure if its even a bug.

I would test out to see if the enemies can kill eachother because I think they did one time but I'm not sure.

This was really nice!  The "infinite training" room kinda made the boss way too easy :D
But overall it was a nice and fun experience. Well done!

This was sick! The sound effects and music went well together. I just sat and farmed power ups for a we while :P

Cool game, I'm dumb and didn't realise you could shoot at first (even though it told me) so I was just trying to get all the enemies to kill each other instead and I had a lot of fun doing that. Then I realised I could shoot and that was also fun. It was like I got 2 game modes!

I liked the way the bullets collided with each other too.

I wasnt expecting the player's projectiles collide with the enemy's projectile, I really hope that this was a conscious decision instead of a "didn't think it was that bad". Game adhered to the theme since it involved rooms and connecting doors with enemies in them, classic.

Indeed what you hope was right. It was a conscious decision.
At one point the bullets were destroying themselves upon contact and it felt kinda flat. I was debating between making the bullets ignore each other or colliding with each other. I chose the later.
But then as they collided it filled up the screen quickly... so I made them actually get destroyed about a second and a half after they collide.

Starting room being green was actually meant to show that you were outside the dungeon. The game needed more graphics.

Cool Game. I love the way it plays, especially the bullets!