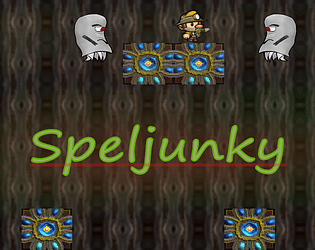 Talking points of your game
Spelunky on drugs

I liked a lot of it movement was good though couldn't get a hang of the build mode toggling, I think that's more to do with me not being good at the game. I didn't get very far in the game i kept dying. : ), But solid effort clever game name : D

I really like the gameplay concept here. The controls were pretty funky and need some smoothing out, but the idea of building your own platforms to get through platform levels is really cool. A solid concept that just needs some refinement.

The launcher told me it was an incompatible download. I'm using windows btw.

Compared to most games submitted it has a lot of content and features but the swinging I found unreliable and often frustrating , it suffers from a lack of polish which is understandable. Although there is a lot I think it's just too much stuff to make a fun game in 3 days.

Building was cool, I just minecraft my way through the lava, finding your way can be a bit hard too.

There is nothing here that couldn't be fixed with a few more days of dev time.

This is really cool! I love the way you can swing across the blocks!

Death screen wouldve really made this much better, I thought as a player, that I accidentally entered a new zone, and as such thought I was playing the same level over and over. Jump height should be increased slightly so that it clears the platforms much better. Theme was barely adhered to in my opinion, there was no reason for me to think that this was a cave instead of a dungeon, some indicators and visual cues that this is a dungeon wouldve helped. Needs audio, that goes without saying. Its good that you showed the player that tab is the build mode, except I think that the key should be shift, because the left most finger on the wasd cluster is already resting on shift. Build mode doesnt seem to have a clear use, I can just use ropes to traverse the levels. All of those aside, its really fun to play, and I wish it could have more visual feedback, some audio and perhaps some tuned controls.

The physics feel super nice, and I really like the laser, rope and build functions and how they feel. Really good game.