Submitted by Sleepy Games (@AbensJosh) — 14 minutes, 35 seconds before the deadline
Add to collection 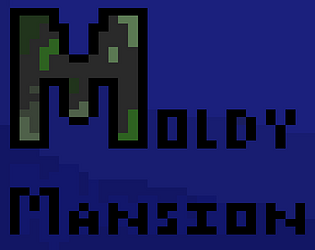 Talking points of your game
This game is about going through a mansions dungeon, destroying mold monster, mold blobs, and the boss at the end.

I've tried to work on this non-stop. This is the first game I've ever publish, while not done, and very buggy. That's ok. I love it, it turned out awsome.

I had my friend help make music and art, with out him i probably won't have gotten done.

I had fun with it. I wish the light would have lasted a little longer. Well laid out. I don't know if this was just me that experienced this but the coin score at the end of the game that popped up didnt populate the score with the score i had earned in the level. Nice boss fight in there.

hey! Thanks for the feedback! I have fixed the coin bug, along with a bunch of other bug that I will update when the jam is over. (They're already fixed, just gotta  wait for reviewing to be over!) Thanks for playing  the game!

The sound of the washer was

annoying. It also hurt my ears to the point I had to play with the sound off, and believe me I tried to stick it out.

I don't understand the application of the flashlight mechanic. Is it just to help you see a little better? Can you turn it off? It seems every time I get it it just loses battery. I tried to find a menu with the controls but ended up running into another problem.

I thought pressing menu from the pause menu would just take me to maybe an options menu or something instead of restarting the game (without even taking me to a menu but maybe I just happened to press start game on the menu before it loaded idk). Maybe changing the menu button to say restart after you had already started a game or making it say somewhere that I would lose progress if I press menu would help. I was frustrated I lost progress and had to start over so I just stopped playing.

These issues are an easy fix and I hope you take this game further. I could definetly see a full blown game out of just this concept but with more depth. I look forward to seeing your next projects!

Edit: Had to clear up confusion by adding things I forgot.

Thanks so much for the feedback! I understand the problem with the sound, and you're the first person to bring it up, and I thank you for that! I'll probably add a more bubbly sound to it. The little walking enemies were supposed to have a damage indicator, but I ran out of time. Many people have had issue with the flashlight and I'm gonna be work on it (also will have some better future used)(it also stuns the little enemies but I didn't show that well enough). The menu button was a bug I didn't even notice until I released the game, but I fix it today, and will go out with the next update. I will also look into a save system, but that may take a while (only been working on unity for a year and never published something before!). I'm also glad to say that I will continue to work on this! My friend and I decided it was a good concept to continue with, and fun to work on! Thanks again for the comment and feedback, it truly makes the game better in the long run!

Yeah a bubbling sound is probably better. The biggest problem I had with the sound was that when I held the button instead of it replaying after it finished it would just restart the loop from the beginning and making this RNNNNN noise.

Yeah I read some of the comments after I commented and saw it stunned enemies which I had no idea. It's an interesting mechanic. Maybe an separate indicator for stunning might help.

Also unless you end up adding more levels or making the game really big, I don't know if you need a save feature. I didn't get to the end of this version but I imagine it isn't able to be beaten in more than an hour.

Most of all, I'm glad to hear you will keep working on it.

The level is super short, but there is a mini boss battle at the end. (It a little unbalanced because I didn't fix a barrier bug that lets you cheese the boss at the end). But we plan to go pretty far with this game. Add more enemies, a few bosses, and the entire mansion. Also some weapon upgrades. So I want to make a save system for it. (I'll also fix sound issues)

This game was actually pretty fun, good even, especially considering the time limit.

There are two suggestions:  One, I think that the flashlight mechanic, while actually very neat in design, could've been implemented better.  I would personally have opted to make it only be active while holding the right click, the right click toggle is not a bad idea, but having it automatically toggled on kind of painfully teaches the player about the battery by letting it die immediately.  Then, when they pick up batteries, they almost act like a temporary light buff than a resource to manage.   I would've opted for the holding personally, since the battery is so quick to deplete, allowing users to toggle for brief moments, instead of needing to aim, shoot, and simultaneously toggle the flashlight on and off.

The other suggestion: The flashlight didn't seem to have any effect on the final boss, and while I can grasp that one shouldn't stun the final boss just for managing your battery, perhaps you could've reduced the boss attack speed for a moment after being exposed to light, allowing for expertise with the flashlight to be most capitalized on.

Not so much of a suggestion, but I might consider making the large slimes have some kind of effect, as it was, they felt more like objectives.  They probably were objectives, sure, but even so, as what appears to be organisms, maybe make them a spawner, to make it a bit more urgent to kill it, instead of being able to kill your way through the enemies with careful kiting, even without a flashlight.

Thanks for the review, It's really helpful! I will definitely use it going forward while I continue to work on the game. Thanks again!

Where my money at?!?

Lovely game, extremely well polished! (except for a bug where i got pushed out of the room once oops) Simple but effective shoot-em-all mechanic. Enjoyed it C:

Submitted
Curse of the Drunkard
LikeReply
Sleepy GamesDeveloper1 year ago(+1)

Yeah, I didn't even notice this till I Published it, but I didn't think it was a big deal. And my friend turned the bug where you're pushed out the room into a speed run. Thanks playing and I'm glad you enjoyed it.

Big boss man told me he'd pay me well to clean his dungeon. I cleaned it and he promised me $325 yet when I finished cleaning he threw me out without paying me. Never trust a dungeon overlord

I know right, all that work for no pay!

Art wise it's probably one of the better games submitted but I can't really say it's fun, the enemies don't do anything , there is no impact on you or them getting hit, little difficulty.

The flashlight battery thing is a unnecessary addition, it doesn't mean anything ,it doesn't scare away the mold or do anything except drain really fast and be a annoyance.

Pretty game, polished game but I can't say I had fun.

Thanks for the feedback, once I get back to working on it, I'll be sure to add some feed back for getting damage, and giving damage to the enemy!

Really nice how the game is packaged into an extracting zip, saves some time when getting the game loading.

Gameplay itself is interesting at first, but the incentive to keep playing quickly runs out, since the objective is to destroy all of the mold then finish. The player will only be doing those things because they have to, not because they want to. If the game had a way of converting the money resource into something the player could have, the mold enemies in the level will have double purpose. Levels dont seem to be randomly generated. The game had no way to communicate to the player that the flashlight was on, as such, every time you picked up batteries, your flashlight instantly ran out unless you kept track of the state. A probable fix is to either change what the flashlight icon looks like if its off, or turn it off completely if it runs out. Flashlight also seems to serve 0 purpose, since you can already see without it.

The intro sequence is a really really nice touch, its nice that you explain the universe that this game takes place and it really helps. Feedback on pickups, shooting, and progression is also a really nice touch. Its important that the game communicates important events with the player, especially if theyre to do with progression. Overall, the game feels really cohesive and consise, its a simple idea that works really well if expanded upon in the future.

Thanks for the feedback! Will definitely work on these when I get back to working on the game!