A cute little puzzle platformer
Submitted by SpaghettiCupcakeGames — 4 days, 4 hours before the deadline
Add to collection 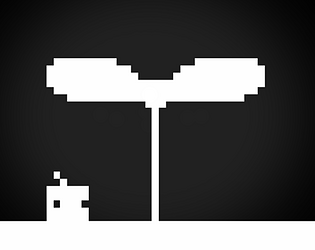 Loved this game, it didn't really use the typical gameboy controlls, but really solid entry. You should have probably worked on some sound.

What a nice game! Even though it's not finished I had a nice time playing it. Obviously would love some audio and more puzzles.

Controlling the bug and the plant feels alright but switching between the two is awkward IMHO. I'd rather toggle the controls entirely instead of having to keep a button pressed. Some graphical feedback on what you're currently controlling would also be great (you still have two colours to play with, maybe a subtle highlighting of the bug/plant would be enough).

I had a hard time figuring out the plant could grow in diagonal and the bug could walk on the stem. But maybe I'm just a bit dense.

Anyway, would love to see this one refined and expanded on. Well done!

I really enjoyed the discovery on one of the first levels that you can walk on the stalk. Opens up a lot of possibilities.

A small nitpick: I think this game would feel a lot better if if could toggle between controlling the bug and the plant. Also a little indicator which mode is currently active make the game a lot more comfortable to play.

Idea it's great I had fun thinking my way thro it but it's really unfinished, looks of it could be better you had two more colors to use so you could add some shades and I noticed that you can fall from platforms if you go outside of screen. Really good idea but execution is on prototype level. I understand it's 10 days most of us have some day job or other things to do. But ideas for levels and slow introduction to mechanics is done perfectly so please release post-jam version. I will follow you and wait for that version.

Idea it's great I had fun thinking my way thro it but it's really unfinished, looks of it could be better you had two more colors to use so you could add some shades and I noticed that you can fall from platforms if you go outside of screen. Really good idea but execution is on prototype level. I understand it's 10 days most of us have some day job or other things to do. But ideas for levels and slow introduction to mechanics is done perfectly so please release post-jam version. I will follow you and wait for that version.

I really love this for what it is, and I definitely think you should expand it! I really enjoyed playing through it, though I really wish it had some audio.

Great idea and great execution of it! Keep it up!

so cool and simplistic. love it.

so cool and simplistic. love it.

the idea of mechanics is good!

I played (and finished!) the game earlier today!

The pure, simple black and while style is nice; actually, I think it reminds me even more of the Thumby than the Game Boy. ;) (As a side node, my first game jam was dedicated to the Thumby!) Simple yet clear, including the small movement for the water drops; and the ‘growing bar’ for the flowers is a great idea.

Mind you, I usually read the whole game page before I play, but for once, I only took a glimpse first; this made me first wonder whether falling from a moving plant was a bug, and I solved one or some of the first levels by jumping and then quickly raising the plant while I was into the air. X) It is totally fine to have put the instructions on the game page, do not get me wrong, I just realized that some way to make the player understand this inside the game would be super useful if you take the game further (which you wrote is a possibility :)). I also realize that this technique of jumping-raising could potentially ‘break’ (make too easy) future levels! Suggestion: prohibit raising a plant while jumping?

Apart from that: the game feels very playable; perhaps autorizing the bug to walk on diagonals would be an improvement (although I know this may get tricky to program, as the lines are generated dynamically XD). Also, some detail: controls are QWERTY-only instead of layout-independent (I have an AZERTY keyboard), BUT arrow keys are enabled.

Since there is a puzzly side to the game, the design and progression of the levels is important; I feel you put quite a share of tutorial levels at the beginning — which may be wise! Some later levels got interesting, especially when you have to zigzag your way to the top, or think a bit about the order in which collecting the drops. I think it would have been even better to have at least one really difficult level, to show the extent of the mechanic. You can ensure no player gets stuck by adding some command to skip (or choose) any level — this is a general tip for puzzle games and possibly some others. :)

The last scene is super cute. :) AND hints at the possibility of having multiple characters and/or plants! By the way, I noticed the bar was depleting more slowly then; it made me wonder if there was a secret upwards, above the screen, so I grew my plants up, but next, I saw a character/bug could not make it through the border of the screen. XD

Too bad for the audio… ._. As a tip: the top priority is having audio for the main heavily used mechanics, which here would be jumping, growing, and getting a drop! I saw on the forum that the rules are not absolutely Game-Boy-strict and that you could use tools such as sfxr for (8 bit) sounds; I think it would have done the job!

On the plant theme and also technical side, I like how the game allows you to draw a continuous one-pixel platforming line. :) (I think it could have been tricky to implement on a genuine Game Boy game, as I read today a confirmation that the device does NOT allow you to switch a mere pixel, only tiles through VRAM. Once again, the Thumby on the contrary does let you do this; I am now wondering whether your game should aim the Thumby! You might want to consider. :)) It feels totally in line with the theme to have growing as the main mechanic. (My semi-playable buggy unsubmitted prototype also uses this, and actually, during my brainstorming, I was consciously ONLY coming up with ideas linked to growing plants!)

It felt like a sweet and pleasant platform-puzzle game/prototype, with a great main mechanic; I just wish there were more! :) Thanks for the game.