Don't get greedy...or do!
Submitted by The Bonsai Treehouse (@BonsaiTreehouse) — 4 hours, 27 minutes before the deadline
Add to collection 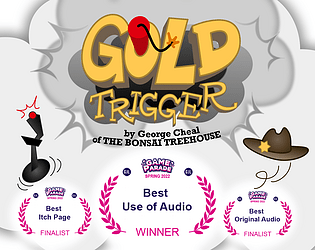 Number in Team
One

Does your game include Art packs?
No

Does your game include Sound packs?
No

Does your game include plugins or pre-coded content?
No

Please provide a link to a 30 seconds gameplay YouTube video of your game.
https://youtu.be/A4EZGQ80rRo

The game itself is nice, and I liked art and sound, but I think it needs some sort of feedback and tutorial. In the beginning I didn't understand what to do. I found the txt inside the zip with all written, but I think would be better to have it in game

I love the presentation, and the description on the itch page was very amusing. I wish that was in the game itself. I tried to load up the game without reading the description first and was a little lost. Not your fault, but a quick blurb in the beginning I think would've helped.

The game itself is like more extreme and entertaining Minesweeper, which I dig. As a solo project, the fact that all of these elements work as well as they do is impressive. In terms of the depth, there isn't too much there yet, but that doesn't mean this couldn't be expanded on in the future. I might have made the default move speed just a tad faster, or give me a reason to use the faster movement (set a timer, perhaps).

Thanks! This idea did start as an analogue to Minesweeper; definitely considering expanding on Gold Trigger in future...!

The metal detector battery life bar on the left hand side of the screen was intended to be a kind of timer for how long you were allowed to hunt for gold before it ran down and the trade-off for double-clicking to move faster was to cut off the dust trail so players have less of an idea of where they'd been and where landmines could potentially be hiding.

The flavour text/instructions on the itch page were excellent :D I enjoyed scouting around the map with the metal detector, and the SFX when finding a gold nugget made things feel really nice! I wonder whether the beeping of the metal detector could increase in frequency based on how close to the gold you are? The overall aesthetic and visual presentation were great too, very eye-catching title screen and UI!

Submitted
Past Lives: The Case of Bletchley Manor
LikeReply
The Bonsai TreehouseDeveloper317 days ago(+1)

Thanks for your praise! I'm most proud of the animated 2D elements myself!

I thought about the beeping rate increasing when close to gold for initial design early on, but in playtesting I figured it was more potentially entertaining to put players in the dark and have them deduce things on their own based on where they've been. Some gold also spawns on top of the mines which would have screwed with the beeping code a bit, so I decided to simplify things with clearer, more binary distinctions:

The gold is made to spawn within an inner circle around the mine and that inner circle is what sets off the slower beep as opposed to the gold itself. The idea is that players know they're in the general vicinity of gold and the land mine is also setting it off to a degree which is intended to up the danger factor.

Ah cool, I was going to suggest having different beeping sounds for gold and mines, but as you've mentioned adding a bit of uncertainty does add some interest! Great to hear an explanation of your process :)

I appreciate the in-character intructions txt, haha! I managed to get 15 gold after a few tries. I found the tells of gold vs mines basically impossible to tell, and going back to the bank after just a few gold seemed to always be the best move, maybe if there was more insentive to stay out longer there would have been more of a risk reward conflict? In terms of style the thematic music was on point, and the menu was really nice too, with the bouncing elements.

Submitted
The Last Dodo
LikeReply
The Bonsai TreehouseDeveloper320 days ago(+1)

Thanks for the feedback! The speed of the beeping sound should be the main tell for whether you're about to strike gold or a land mine, but maybe I'll make the differences between beeping speeds a bit clearer and more pronounced in a future build. Also, gold can sometimes spawn right on top of where a land mine is, which can admittedly create a good deal of uncertainty in some cases.

A general rule is that the longer you stay out, the more gold you'll earn. I experimented with different durations of battery life for the metal detector to find the right level of tension while also making players more comfortable in trying to find as much gold as reasonably possible. Basically I wanted players to keep going, but I also didn't want them to stay out there forever. I am definitely thinking of taking this further with an expanded version at some point so that players can have more things to spend gold on in the long run though...

Lots to like in this simple game. I liked finding the gold, I liked exploding, but I am not sure how the extra life worked actually. I had a bleeping nice time and that's all that really matters. 'Til next time partner.

Ah the extra lives; if you press the space bar, you trade in some of the gold that you've banked in the middle of the screen so far for an extra life. The value of an extra life goes up every time you buy one though, so the idea is to only buy if you're really desperate, because "every life matters" and all that jazz. It's explained in the download page description and it's repeated in a little "How To Play" text doc in the download zip itself, though I can always give it a bit of a rewrite for clarity's sake if you want.

Glad you enjoyed it though! 🤠

Ah I looked for instructions in game I guess. I had downloaded a few to play later including this one so there was a disconnect from the page and the game by the time I got round to it. No worries I still had a lovely time with my one life!

Nice concept! I don't know if it's a but but the mines appeared as cubes on my end so I could know where each of them were which removed one difficulty, but I can see how interesting the gameplay can become if you can't see 'em hehe.

I really enjoyed reading the itch page, although it took me time to get the gameplay (also not being a native english speaker), maybe you could add a kind a short section to sum it up ?

The mines appeared as cubes for you? Well, that don't sound right! Mind if you send me a screenshot so I can figure out what went wrong? Because I'm not sure how it could have happened, because they're supposed to be set to invisible by default... 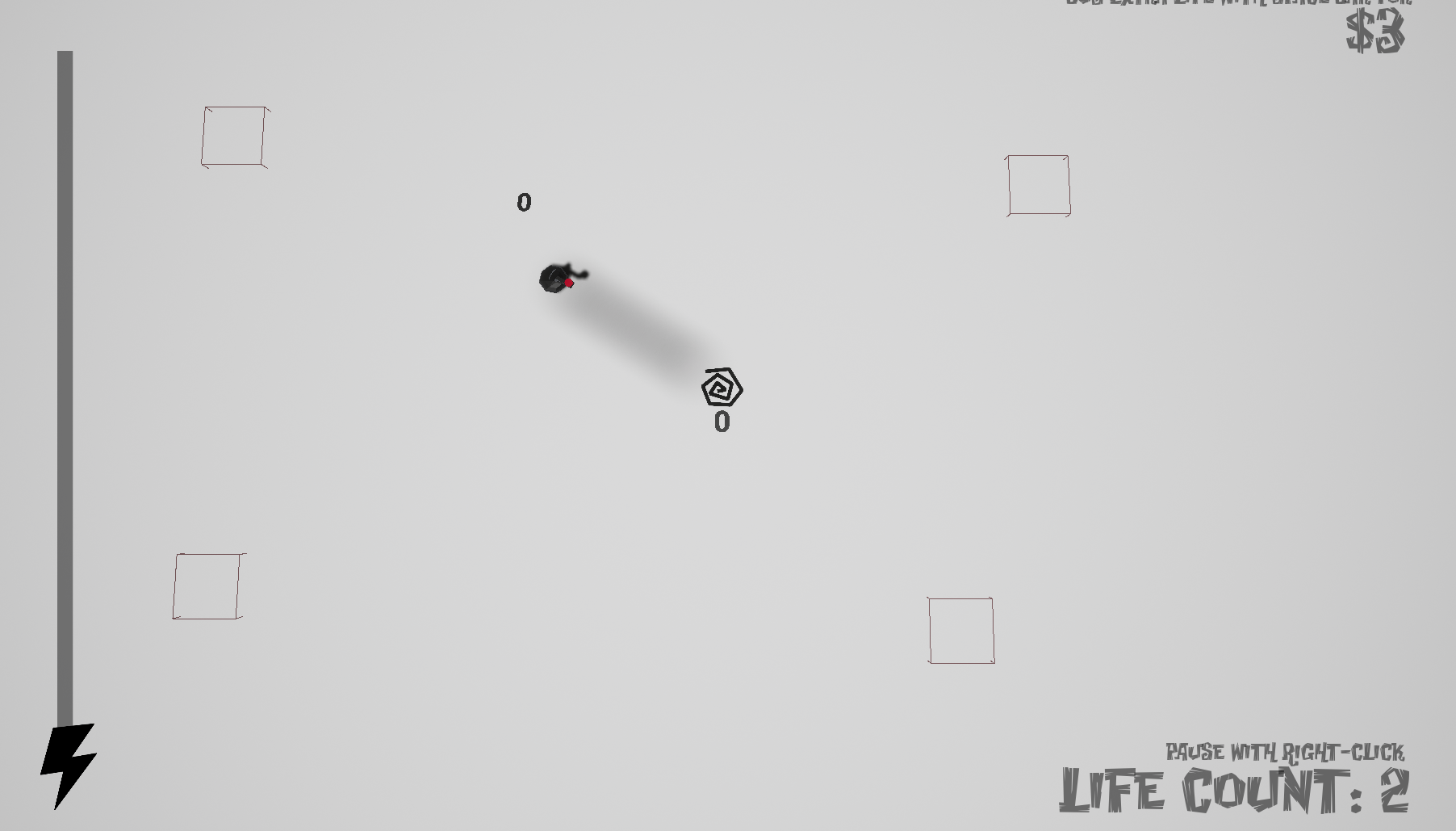 LikeReply
The Bonsai TreehouseDeveloper320 days ago(+1)

Ah, looks like a visual oversight on my end. It was required for playtesting and I forgot to amend it. I've made the current build invisible so you'll have to make do with the first that has an audio bug (details in the updated description). When voting ends, I'll upload a third build 👍

Didn't get the gameplay, to be honest. You should maybe add an instructions tab and a tutorial level. However like the art and sound effects. If you don't mind could you check out and rate my game?

Just gave your game a try and left a comment too! 👍

There are instructions on the itch page and in a text doc for the download itself, mainly because I didn't want to risk the pacing getting dragged down and I didn't have room to include all that explanation inside the game itself with the time I had left to submit it.

Super neat idea! The music was fun and I loved the personality on the Itch page. :D

Super neat idea! The music was fun and I loved the personality on the Itch page. :D

Once I'd gotten the idea, it was a neat little diversion. Has one of the juiciest UI I've seen! Excellent work!

Game itself would benefit from more player facing information; maybe wiggle the detector from side to side as it moves and tie the beep frequency to the very end of the detector so that players can see which direction the next pile of gold is likely to be in without having to change direction/ click so often. I felt like I was bumbling around in the dark, hoping for the best. Finding the gold was a bit underwhelming; pour some of that juice onto the gold piles! The randomness  of the levels meant dying felt arbitrary; there was nothing I could do about it or even see it coming.

The dust trail was a great design decision! I had to read the comment below explaining why it was added to fully understand it but now I see it's purpose to the game.

If you were going to take this further, I'd add a brief explanation of how to play and upgrades to be purchased with the gold to give the player something to aim for. The game will live or die around that juice though so use it liberally!

Thanks for the feedback, especially about the UI! I knew the concept was going to be too simple to expand much visually, so I tried to make up for that in all other areas of the presentation (the explosion was probably my favourite thing to animate by far).

I did consider providing more precise hints for gold locations as players search around, but I didn't want to make things so explicit as to make the gold hunting exercise trivial and dull the tense threat of being exploded by land mines. Didn't have time to make an in-game tutorial so I throw all of that explanation stuff into the download page description lol

I'm VERY glad that you feel like there's mileage in this idea; I will definitely consider expanding the gameplay and injecting some more visual juice too! :)

The connection to the theme feels a bit stretched, but it has an interesting concept anyway. Nice entry :)

Thanks! I tried to be more literal in arcade gameplay terms of a literal "lives system" for the theme, wherein every life counts towards ensuring continued survival and a higher score, hence the dust trail, the banking system and being able to cash in gold for extra lives that gradually increase in value.