A game about getting along on a small town
Submitted by OSG (@Thorn_Garden) — 53 minutes, 51 seconds before the deadline
Add to collection 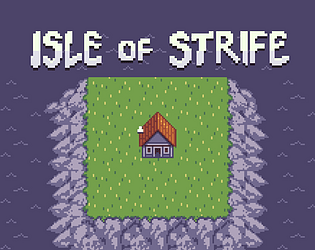 Very cool, unique approach to city building. It's pretty fun, and the large variety of traits keeps things interesting (although I did find it fairly difficult to survive long term). I like how you're able to take people back out of houses to rebalance things when you get the chance.

The game looks great, has a decent atmosphere/mood, and is well put together. The music is nice too. Good job :)

Ooh, I really liked this one!

Overall, I agree Nyarla90. The cooldown on the house just slows things down. It makes it a bit frustrating when you need to juggle people around, which just becomes tedious when you have too many people and not enough space. As soon as a new house finally opens up, I found myself not even reading the stats and just dumping people in the house because I finally had a place to put them.\

It absolutely fits the theme! The whole gameplay is centered around the tiny town. not much else to say there.

As for fun, I think the end-game is a bit too slow and tedious. It starts off super optimistic, but as soon as I begin having conflicting residents, the lack of space to put them bogs down the experience. I understand that you're supposed to sacrifice people's desires for other stats, but it becomes too much to manage too quickly.

For innovation, I think you did a fantastic job. I haven't played many games like it! I t's definitely a very creative idea.

The graphics, oh my! Seriously stellar work on the characters! All around, the artwork is fantastic! I love how the water even moves slightly.

For Audio, I think as others mentioned, the bass was pretty loud. The music has a nice melody, but it's very short and never builds to anything. I think it's a bit repetitive, even with the catchy/relaxing melody.

There isn't much humor, though I don't think the game was aiming for that.

I really like the mood of the game. It's a bit stressful, but it has its charms.

The puzzle of housing everyone in harmony is great, but it was too fast for me to handle. Pascal and Isaac fell in love in a house with a lunatic roommate. <3

I like that is goes from nice to terrifying chaos! :P I'm no good at managing an island full of people.

Very interesting concept, great execution. The pace was a bit much to handle, but that’s just me. Also, I think it’d be nice to be able to click on event logs to see the info and location of the parties involved.

definitely took a moment to get a hold of what i was supposed to be doing, but overall a good concept. i agree with nyarla that the house cooldown drags out the game a little bit, but i also think that added a nice challenge later game. overall very good, great work!

Interesting and quite challenging (at least for me) game! It's a little boring to click on everyone to check their traits, so it would be nice to have other indicators.

It doesn't seem like house cooldown is needed because makes game ve-e-ery slow. There are situatuions where you can't make a proper turn due to lack of options (there is only one house) and you just have to wait. Also it would be comfortable if character trait were represented by icons so you don't have click on each character to see them.

Very fun, but the bass in the music was hard on my ears (also I'm bad at the game but ignore that part lol).

Submitted
Quest for the Shrink Ray
LikeReply
OSGDeveloper1 year ago

Thank you! Yea I should have lowered the volume a bit more on the bass xD