A physics-based, single-player puzzle game where you switch between 2 robots.
Submitted by Camobiwon (@Camobiwon), Electric (@electric_edj) — 46 seconds before the deadline
Add to collection 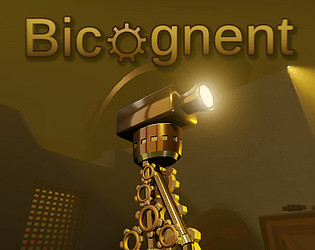 In what way does your game fit the theme?
The two players are unable to complete each puzzle on their own, being 'stronger together' like cogs in a machine.

Did you write all the code yourself and made all the assets from scratch?
Yes, only exceptions being some CC0 textures and sound.

Some very clever puzzles and some good looking graphics.

I just don't like the motion blur and the lights are too bright sometime.

But after all very well done! Hope you keep working on it.

I love the polish! Nicely executed except of the framerate issue, and the movement is a bit too smooth. Maybe make the movement a little more choppy so it feels like I have full control. Camera position is quite weird, if you look down you can see yourself? Maybe move the camera a little lower. Other than that I really like this game and I will play later versions once you have released it. Good job!

Thanks for the feedback / review!
I definitely want to make the player accelerate faster to feel like you have more control soon, and the looking down to see yourself is intentional, as the game uses a "locosphere" style movement where you roll on a ball to move, so it's helpful to be able to look down and see what's happening with it. I'll also double check the camera position, but I'm glad you enjoyed the game!

Very interesting touch on the theme. The graphics are excellent and the puzzles are good enough (maybe a tad easy but still) the concept is very well realized. Very well done :D

Thank you for the feedback! We definitely want to get more puzzles in the future, and are already thinking of how to re-do some to make them more challenging, but perhaps a bit more straight-forwards at some points (Like the outside puzzle may be a bit confusing sometimes)

I am a bit mixed about this game. The visuals, sounds and atmosphere is really good for a jam game. And this alone make me really happy that I played the game.

The gameplay feel like a very standard first person puzzle game. For me the game really needs a new and interesting puzzle game mechanic. The two player element is okay, but I don't feel like it's used in very interesting way. For me the maze level idea didn't really working for me, and it just felt weird why I not just could walk to the end of the level, and it didn't really fit the rest of the gameplay. The physics puzzle element is always fun, but perhaps it's a bit overused in first person puzzle games, and moving the objects felt a bit clunky.

The ending is okay, but I would have liked more of a reason to kill the partner. It could simply be a small dilemma, where the one of them can get it's freedom, by killing the other bot. But anyway the explosion looks very good.

When all of this is Sayed, is this overall not a bad game and I liked playing it. And for jam game it's pretty well made.  Well done.

Thank you for the feedback. I appreciate your concerns on the levels / mechanic use and I'll definitely look into it again to make it fit a bit better. Also yeah even though I made the ending I still felt mixed on it's execution, while thinking it was still a fun effect.
I'll definitely take another look over all the stuff and talk with electric as well, but I'm glad you played our game and left some honest feedback for us :)

Visuals were really impressive, maybe some materials were a little too shiny but overall it was a nice, realistic style. The level design was in my opinion the strongest aspect of the game, the swapping bodies mechanic let itself pretty well to different setups. It kinda reminded me of Portal in some bit, and that can only mean good things. I also really liked the way you handled the tutorial, introducing the player to the controls of the game in a nice, interactive way. But I have to say, I'll never forgive you for what you made me do in the final stage :'(

Performance was obviously a little sketchy, but I know you're aware of this. There was also one particular level (the second to last, I think) where the pieces of the puzzle were a little bit less clear than in other levels, I ended up brute forcing my way out of that one somehow lol

So anyway, I think this entry is really good, if you fix the technical issues you have quite a complete game here, good job!

Submitted
Die in the Dungeon
LikeReply
CamobiwonDeveloper39 days ago

Thank you for the nice review!
We've actually fixed most of the technical issues in later builds, but can't upload due to voting period. We definitely want to rethink the 3rd level a bit to make it a bit more obvious, but the intended route at the moment is to drag an I-beam up to the bronze cube and walk up it. We definitely want to get a new build published, but yeah, I mentioned the reason we can't already. Glad you enjoyed it though and we definitely do want to get to 20 ratings lol

I got stuck on level 3 lol, but the game was good. there might have been a bug on level 3 where the first switch you see would not turn off. The lighting could be a little bit too bright at times. I do not know what to say about this game.

Submitted
Why not together
LikeReply
CamobiwonDeveloper41 days ago

Thanks for playing our game, and yeah the button was bugged in that build. There's been a lot of fixes since, and the solution to level 3 is to grab one of the I-beams and lean it against the bronze cube to get up

Wow, this game impressed me! Especially the ending.

Everything was done very well, the only problems I had with performance.

Mechanics such as interacting with physical objects, pressing buttons, changing characters, and so on are done with high quality.  Also unusual design and good audio.

Thank you for the review!
We've actually already fixed performance (Due to a post-processing bug, not anything like high settings), but can't upload any new builds due to the voting period :/
And I'm glad you liked the game / mechanics, I spent quite a bit of time before even knowing of this gamejam building the player as a personal framework, but Electric suggested I join the jam, and we teamed up and used the framework I built.

Idk if it's a problem on my side or not but the game lags whenever i switch character. Also the movement makes me sick, but other than that it's an amazing game.

This is really awesome and inspirational. Good work!!

If you have some time, consider checking out my game too..

Ok simple and cool puzzle game, only issue the requirement of performance is really high, I have a GT 710, yes i know i have a potato but dude i don't think that all high resolution textures, light effects and a lot of post-processing effects makes it better, hope that you will make the game more accesible to people of low budget PCs.

Yeah we actually got the performance really stable now and it runs fine on even my subpar laptop, it was an issue with post processing and not due to the high textures and what not. We have a build ready of the new version but sadly can't upload it due to voting period :/

Well, at leat you can post a updated version or some sorts like that, I wish to play the game, hope you are doing great!

LikeReply
Rip The SkinnySubmitted47 days ago(+1)

Hey seems fun but the motion blur along with the slide effect causes crazy motion sickness.

Hey thanks for the feedback, I'll look into it and it may also be amplified by lower framerates due to post-processing issues we had causing extreme performance issues

mechanics are great and the graphics are fantastic it's just a shame it's very laggy as others have said, really good looking game though

I really like look of your game. Mechanics are great but laggs are little bit problem.

If you want you can check our game. Thanks!

Hey there Your game looks good and is fun. One problem is that it's super laggy. Good job anyway^^