The road to the finals will be ruff!
Submitted by jfaw_love, LudvigLoven — 11 hours, 4 minutes before the deadline
Add to collection 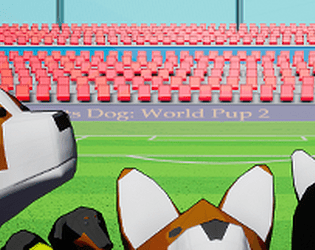 Elevator pitch
The way to the finals is ruff. Will you go all the way in this mastiff effort? The pawsibilities are endless!

Describe how your game adheres to the theme
There are already a dozen Air Bud sequels. Another one would be absolutely unnecessary!

The theming, audio, and visuals are all really good. There's something satisfying about watching a chaotic horde yipping and dogpiling a soccerball.

That said, I never felt particularly in control. I liked the idea of choosing how to position your dogs at the beginning of the match, but after the match starts it pretty much immediately descends into chaos without any further input. Having a dog you directly control or having the ability to give your dogs loose guiance in the middle of the game would have helped a lot.

I ran into a couple bugs that made me wonder if this game was secretly a creepy pasta. At one point the match ended, only for the teams start alternating about 15 rounds of penalty kicks, and sometimes dogs would ragdoll in ways that would cause their limbs to freak out a bit.

This didn't feel particularly sequel-y to me, since it's going directly from "one dog is good at sports" to "only dogs play sports now". Having it be about an all-dog team playing against all-human teams might have contexualized it a bit better as a sequel to a sports dog movie.

The main issue I got with it is it doesn't really feel like I have much impact on the game at all. Setting up positions pregame didn't really seem to have effect that I could tell and if your team's ability was on a long cool-down the game felt just a little too passive.

I laughed out loud at the gag on the start screen. This game feels like a fever dream from the concept to the voicework for the dogs, the flying ragdolls and special powers. It's silly as hell but my first game ended in a loss because things just didn't line up right for my team both in terms of effectiveness and hilarity. When I tried the second time and picked the German Shephard team things went totally different. The Comet Kick is way more useful than stamina recharging or tackle+kick strength increase. For instance, in my second game it went to penalties and on my first shot I mistimed the Comet Kick so it occured before the kick and sent the ball flying into the stratosphere, ending my teams turn. I then tested the hypothesis this event sparked in my mind and found that yes, I can do that for the other team. I wasted a couple of their shots and won on a single goal in penalty kicks and I tell you what I feel I earned it, damn huskies. In general, the games were way more exciting the second time around with dumb plays and things happening whereas in my first foray nothing really occurred, so it seems that sometimes the game doesn't achieve what it's capable of and that might turn people off which is a shame. I enjoyed this quite a bit when fate and chance deigned me a good set of futbol matches.

One thing is certain - this game is super cute. I could probably sit and watch these pups battle it out for hours (I'll probably go back and do just that after leaving this comment). As TomR mentioned though, I didn't really feel like I could affect the match too much. The couple special abilities you get are really fun, but seem to just as easily affect your team negatively as the other. Maybe a little more gameplay on either the management side or the player side would give it the balance it needs. Overall, great job.

Everything about this game is great except I don't feel like I have any input on how the match goes. It's like watching an NPC simulation.

Footnote: if you beat the game, you unlock the secret Golden Retriever breed for all future game sessions!

Well, i know that this post will be lost in the internet space.
But you sir, you've done some amazing ball phyiscs in this game.  Create another more polished soccer game please.
I am a keen soccer game fan, i've played almost any soccer game released. Also, i write reviews in gaming websites. The ball physics are very good. Did you programmed them yourself ? or its something like a template?

Hey, thanks for playing! We sort of did the ball physics ourselves, it's the standard UE4 physics with some tweaks and extras layered on top (spin force/magnus effect, rolling friction for example)

Please make another soccer based game. :)