Pool in space!
Submitted by Sirrico-Net (@SirricoNetGames) — 1 day, 13 hours before the deadline
Add to collection 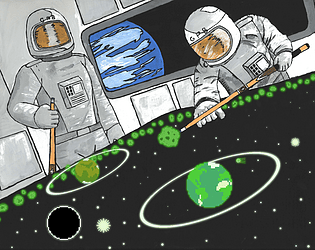 This is really adictive, it could be a good mobile game. Keep it up

Good to know you think so, thanks.

The only issue i've had is having to drag out of the windows border for every shot, but the rest is great. Love these kinds of games, and glad this one is looking like a finished game!

Thanks for the feedback.  I'm still searching for a viable solution for that.  Stay tuned.

C R I S P aesthetics, I like those.

I tried the Windows version, because I don't have an Android, though I'd agree that it looks like it would be a really nice mobile game. Though you'd need to find a way to overcome the strength of the shot in the corner being limited by how far you can swish and/or move the mouse. And though I saw the option that adjusts the base speed and that you've already adjusted the speed from the last feedback, I feel like the default shot should still be a tad faster, because right now it feels like it lacks a little oomph.

The level editor was my favorite feature, I thought that was really cool.

Hey thanks for trying it out.  In my next build the cue travels at light speed!

Here's a video of me playing your game.

Thanks for the feedback and definitely thank you for playing so long!  You were able to point out a few bugs to me and also show me a few levels I could tweak.  In reference to the difficulty in hitting the asteroid, the game now pauses when taking a shot, so maybe that will make the game a bit more manageable.  Be on the lookout for other changes soon.

Pretty fun, though I feel like it's meant to be played in short bursts (it'd be good for mobile).

One thing I found weird was that spacebar stopped the cue. I'd try to speed everything up and accidentally end up cancelling my animation. Also, I think some of your menu elements resize wrong. It's hard to tell if they're meant to be that way, but they spill of the screen and are huge.

Yeah some are gigantic, because I am wanting to port this to iOS eventually.  I just need to find a look that works for all platforms. Thanks for the feedback!