A retro first person shooter with roguelike elements · By

I am glad to receive feedback and I want to improve the game as much as possible. Please write here, if you have anything you want changed in DUGA, and we'll discuss it :-)

If you have experienced any game crashes, please provide the content of the crash report, called "CrashReport.log" within the folder, "data". Please post its content on pastebin.com. It will make it much easier to read. Thank you!

Hey, I submitted a PR on GitHub (same username) to fix a crash on startup.

Will there be Mac and Linux versions?

It has been requested more, than I thought it would, so I will investigate my options.

Edit: It seems, that I need a Linux and Mac in order to make builds for those platforms. Unfortunately, I only own a Windows PC, so it is will be very difficult to build for other operating systems. However, the software WINE should allow those platforms to run Windows .exe files.

Great game! i have been told you spent 2 years in development, well they where the best used 2 years, are you planning on addidng more things like more weapons or stuff through time?

Thank you very much! I did not plan to add new features, unless they are greatly requested. I will mostly do bug fixes. However, lots of people have asked for more content like new guns, so I will consider it :-)

Hi, nice game btw, good work! Just so you know both AVG and Avast anti-virus are flaging you EXE as a threat 'Win64:MdeClass'. Had to disable AVG to play :/

Thank you! I know... some experience issues with this. Unfortunately, there is nothing I can do about it. But I can assure you, there is no malware :-)

yher, i trusted that it would not be a threat. iv sent it to AVG for analysis so hopefully they will put an exception on it in the future. Iv had this before on steam games, it total BS most of the time.

Thanks for the response and keep up the good work :)

First of all, congratulations for the game. It's quite an achievement.

I had the following crash while clicking "DROP" on a secondary weapon.

I know how much effort is to make a game, and you should be very proud. I will be donating to the cause.

These are a few issues I noticed while playing:

- The game experienced many hiccups (HIGH DETAIL), specially if there is more than one enemy  (I have a Core i7 with a 745m Nvidia Geforce).

- I didn't find a reason for aiming. I can hit everything while running like a maniac.

- Zombies die with few shots and they almost don't pose any danger (same as other melee enemies).

- The gauss rifle is too slow. Swappedit after a few seconds. Same with the knuckle spikes.

- Weapons are a little boring and some gun sounds don't fit the visual style of the game.

- Why the ceiling has no texture?

- Regular knife does little damage. Maybe raise the damage to compensate for the range.

- The arrow of the compass is confusing to know where it's pointing if you look fast. Maybe make the tip brighter or noticeable.

thanks for the feedback. I will take your points into account. The ceiling has no texture because it would take too much time to calculate. The game runs quite slowly, because it is written in Python.

So i'm getting.. More or less unplayable lag for some reason, i'm running on  a system that i imagine can handle this type of game (1080 and a ryzen r5) so it seemed a bit odd, Also i think the mouse movement should probably be given a lower option

Do you experience lag all the times or only when special actions are happening? An even lower option than the low one in the options menu? Thanks for the feedback!

They'd have to be rare tho

Thanks! I sent you a reply in the other thread.

(before I start: Sorry for my english, It's not my first language. And grab yourself a snack and get comfy, because this is a looong post)

Hello! I've played your game for some hours and I gotta say... it's a great game!  :D  I really enjoy  it. The music, the guns, the enemies, the artstyle, I think it's really well done.  My highest score is level 17th. Although I wasn't able to screenshot the moment were it said the level, I did get the screenshot of the 16th.

My game crashed In the middle of a gunfight,  and I sent the crash report to your pastebin page.

If you are interested, I have some suggestions that I think could improve the game :3

1.- Less ammo spawns: all anemies drop ammo, even the lower ones like zombies (who particullary drop gaus ammo). I think that the ammo drop could be lowered in general, but also the type of ammo that is droped by certain enemies. I think that zombies could drop lower ammo like bullets and cauges, while the ak guys could still drop every kind of ammo, but reducing the possibility of dropping higher ammo (gaus). In my opinion, the gaus gun is very powerful so it's ammo should be a lot less commonly dropped by enemies.

3.-Bosses: I think some bosses here and there could  really spice up the game a little. I'm thinking maybe some low/not so powerful bosses every 5 levels, and a big strong boss every 10.

4.-More enemies: Variety on enemies is always good, but that's not my point. I mean rooms with more enemies, the most I've encountered in a single room is about 4, and would really like a lot more, especially in big open rooms like the ones where there are 4 pillars on the corners. those could have at least 7. Also, a big quantity of enemies in the rooms with the door to the next level could be fun, and challenging.

5.- Faster animations: Especially on the death of enemies. The animation is very slow in my opinion, and most times I find myself shooting 2 extra shots to killed enemies because I don't see the animation starting.

6.-Better A.I: the ai is good, but it gets boring after a while. Every npc's movements are the same, move a little, shoot, move a little, shoot, repeat. And if they loose sign of you, they'll just run away. I think that it would be cool if they chased you down, and maybe crouched while shooting, fliped and hid behind tables, or jumped to avoid bullets. I think they need more actions, stuff that makes them unpredictable. It would also be cool if you could sneak up on enemies, or tackle them.

7.-More interaction with the level itself: You can't do anything with the enviroment, and I think it would be really fun if you could use it to fight too. For example: putting chairs that you can grab and punch your enemies with (until they break) and tables that you cand either grab to use as a shield, or flip down to use as cover. Maye putting stuff over the tables so when you or the enemies flip them they fall to the floor and break, and that you can grab to hit your enemies with them, like bottles and stuff. It would be cool if there were really dark rooms where you aren't able to see anything unless you take a torch from a wall with one hand while shooting or hitting with the other.

Overall: I think that the game is really fun, but I think that I could be even more fun if it was a lot more challenging. I want the feeling of fear as I run out of ammo and have to defend myself with my knife while tons of enemies chase me down.

And that's all I've got, I hope I was usefull and didn't bored you with the long post "o~o Have a nice day, and greetings from México! 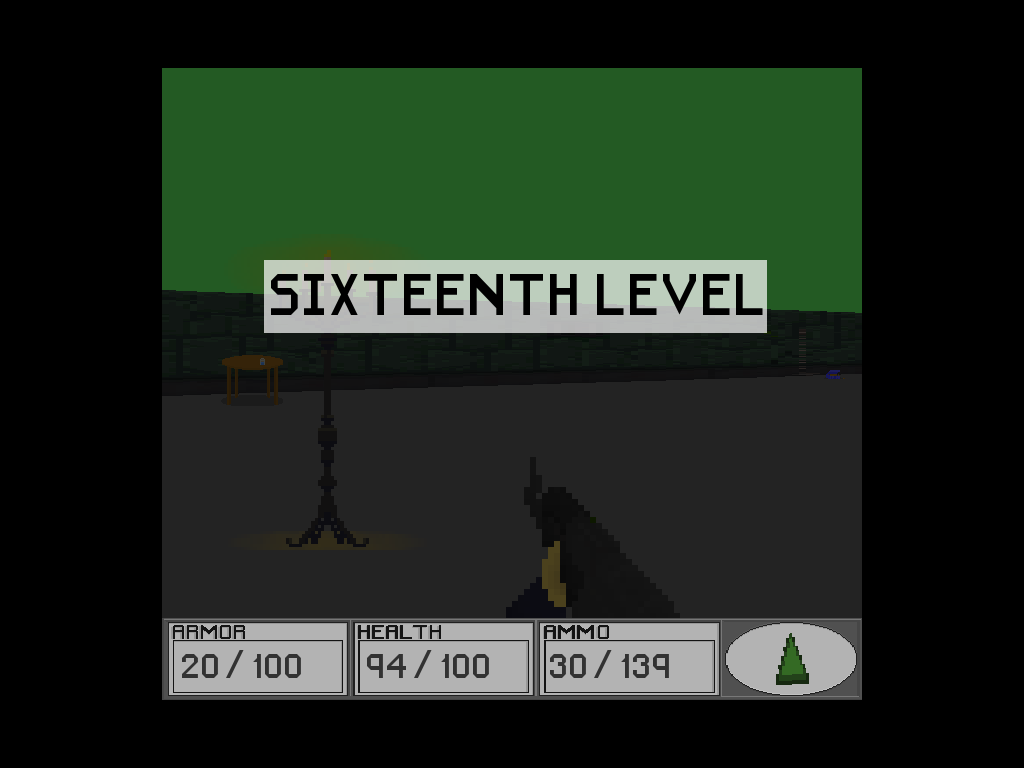 Thank you very much for your feedback and suggestions. I don’t have a pastebin page (at least I don’t think so) would you send me the link to the crash report?

Your suggestions were really nice and I agree with you on most of them. People have very different opinions of the ammo spawns, and I found this amount to be the best suiting without major changes to the generation of levels.

I have tried to implement multiple of your suggestions, like more enemies and darkness. However, both features take their toll on the performance, so I scrapped them.

Adding enemies, changing their behaviors and making the levels more interactive are major changes to the game, which will not be added, as I want to work on other projects. However, I agree it would be nice with the added features. Also, you actually do double damage on enemies if you attack them before they have seen you ;-)

Thanks for the feedback! I am glad you enjoyed the game.

how TF you drop weapons!?

Open the inventory (press i) and click on the weapon you want to drop --> select drop. It will then land on the ground nearby.

I am so sorry to inform you, that I did not make the Mac version, as I do not have access to a Mac computer. Therefore, I have no way to fix it. You can, however run the source code if you have Python 3 and Pygame installed. I am more than happy to assist you, if you need help installing those.