Is the full game out yet? How do you order the digital rom?

Here is the video of me playing it!

Hi I have played your demo and I like it so far. I have uploaded the video footage of the game where I did a let's play but it won't be out till next week. The video shows you some bugs and issues that you might want to address.

That said, I am looking forward to it. Hope you still stay committed to developing the game further even if the comments section isn't large.

Great game! I am looking forward to it!

It has a lot of potential! Keep it up!

Reply
itch.io Community » itch.io » Questions & Support · Replied to Afloofdev in I didn't get a steam key for a game that I just ordered
WrongRookie1 year ago

Ok but how do I contact the dev? Its all in Japanese here and there doesn't seem to be an email or message of some sort...

Reply
itch.io Community » itch.io » Questions & Support · Created a new topic I didn't get a steam key for a game that I just ordered
WrongRookie1 year ago

According to the game's information, i should also be getting a steam key but I didn't get it and it instead just came with the offline copy. How do I get the steam key?

Is it possible to play this via an emulator? Not that I don't mind doing it the other way but its just that its easier to record gameplay footage of the game for my channel!

I just played this and I agree with Francisco. Controls feel delayed and often times unresponsive. It feels slow to just move from one hostage to another.

The big problem is the first level has no place to protect yourself and it is an issue because enemies spawn randomly. You either need to give a fixed spawn for the enemies or add in crates earlier so that you can protect yourself easily.

Having the hostage seems pointless here since enemies will attempt to shoot the hostage and you're stuck with nothing. Maybe you need something who's like harmless but poses a threat to the enemies like a boss or something?

I played your game. Its good for a demo. Weird ending though. Also there is nothing here that screams that I need to be 18+ or older so I don't know why you have that age restriction here.

First of all...I can't play it because I'm single. I don't have anyone whom I can play with. If you want us to give feedback, you need to create some kind of bot players so I can test it and give feedback.

Secondly, for a game that relies online, this doesn't need a PC build and you're better off making it as a browser game for testing purposes so that players can play it easily without downloading it since its online multiplayer.

I just released this yesterday and I'd like some feedback on it. Some issues that you mention may or may not be fixed as it depends on how much of support I get out of this game.

Deliver Pizza pronto or you're fired Avoid getting hit by cars too!

Instructions on how to play:

There are Two Game Modes in the game. To select either mode, click on either GAME A or GAME B using the mouse.

The objective of the game is to deliver pizza to customers that have a time meter in their houses. When you get to the one with the time meter, press E to knock the door and the customer takes the pizza and gives you one point. As you get more points, the game gets tougher! Get hit three times and its game over!

GAME A is simple for beginners to understand the game but GAME B is more challenging as sidecars block your way!

You can also set the time and alarm to your liking. Alarm sets the time of when you want to stop playing the game while Time sets the time. Use the WSAD keys to set the alarm or time after clicking on either one.

I see that you made some improvements compared to last time! This is good!

Reply
itch.io Community » General » General Discussion · Created a new topic Will I get money after the sale for my game ends?
WrongRookie1 year ago (1 edit)

I'm fine with people trying out my game but provided that I can get the support that I may need.

Reply
itch.io Community » General » General Discussion · Posted in I would like to check out and review some of your games!
WrongRookie1 year ago

For a limited time, my game Astro Guard is free so you can try it out if you can.

Its not a long game and all.

Reply
itch.io Community » Game Development » Get Feedback · Replied to Gerhard Atze in Would like some thoughts on my game Astro Guard
WrongRookie1 year ago (1 edit)

You can use the missile and the black hole if you're having a hard time! ;) Thanks for your time!

I like the setting of the game and it works. But there is very little you can do as the zombies start appearing real fast.

Is it also possible to increase the hit box of the bullets? Because the bullet will only kill the zombie if it hits the head and nowhere else and that precise shooting is a bit annoying.

I played up to level 12 as I'm clueless on how to make progress there...

The game has potential but it could use a lot of tweaking particularly the level design and item placement. The best example is level 9 where you're asking the player to get the item and land instantly when you can just place the item that turns you to a different color right before you land on the platform. I think that kind of placement can work.

Also, while there is no rule as to whether you can mix with no scrolls or with scrolls, in this case for a puzzle platformer, I advise you to have levels with no scroll. This is because it not only helps in your levels being shorter(which means it motivates players to play them) but it also means that you can simplify the level design so that it'd be easier to figure out what you're supposed to do.

Maybe you need to make levels that can visually teach the player how to play your game rather than giving a block text. You can look for Box Boy for reference as its a good example.

Also...and this is optional(including the entire feedback!) but maybe you can give some level of hint on what you're supposed to do in the sections? Some games like Box Boy have them and that can motivate players to play the game further.

And lastly...have a delay of the death animation. I just randomly restart without having a clue on what I did that caused it.

Overall, has potential. Don't give up easily and all the best!

Reply
itch.io Community » Game Development » Get Feedback · Replied to Synzorasize in Would like some thoughts on my game Astro Guard
WrongRookie1 year ago

I'll wait and see if such a thing is more needed. In the meantime, can you give me any idea on how I can showcase my game on a game jam?

I have made a game a month ago and I was wondering in which game jam I can showcase the game. Can anyone help?

Reply
itch.io Community » Game Development » Get Feedback · Replied to Synzorasize in Would like some thoughts on my game Astro Guard
WrongRookie1 year ago (2 edits)

May I ask why would you like a cursor? This is for my future reference as a lot of games make the cursor hidden.

Level 5 has only one magnet and no matter what you do, you can never go any higher to reach the top platform.

The concept is interesting but the game still needs polish. I could critique the game but I assume that you've moved on from this one? If not, let me know.

As for what magnets didn't work correctly, I can't tell because to me they worked as they should.

Reply
itch.io Community » Game Development » Get Feedback · Replied to Synzorasize in Would like some thoughts on my game Astro Guard
WrongRookie1 year ago

I have made the game free now as you have suggested.

Are there ways to get more attention than just this?

Reply
itch.io Community » Game Development » Get Feedback · Created a new topic Would like some thoughts on my game Astro Guard
WrongRookie1 year ago (2 edits)

I just want to know what you all think about my first commercial game that I developed. In addition I would also like to know to how to develop an awareness of the games that I release here at itch.io atleast if possible. You need to pay for the game so its up to you whether you would like to provide feedback or not.

EDIT: For a limited time, the game is free.

Reply
itch.io Community » itch.io » Questions & Support · Replied to Afloofdev in Why is there an option to charge for downloading the zip code?
WrongRookie1 year ago

No what I want to understand is why is there an option to charge additional cost for the zip file? Would it not make sense to just charge the entire game and get the files?

Reply
itch.io Community » itch.io » Questions & Support · Created a new topic Why is there an option to charge for downloading the zip code?
WrongRookie1 year ago

And why does the zip file price have to be more than the game itself? Is it a good tactic to charge extra for downloading the game? I'm not able to understand the concept of it...

Keep your planet alive while shooting asteroids, comets and stars! Use the planet's ring to shoot anything in your sight!

I have added screenshots. Should I add them here as well?

I have made sprites for space for those looking to make games through the theme of space. 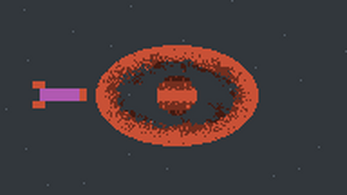 Reply
itch.io Community » itch.io » Questions & Support · Replied to No Time To Play in Where to post my link for the sprites I made?
WrongRookie1 year ago

Ok so in the release announcement, exactly how should I post it as? Sale or something else for the assets?

Reply
itch.io Community » itch.io » Questions & Support · Created a new topic Where to post my link for the sprites I made?
WrongRookie1 year ago

So the email suggests that I post the link to my assets website. Where can I post that? And under what tag should the sprite pack be under? Sale? Browser?