BTW, music is nice and fits the game.

This game is re-make of The Ancient made within Last Minute Jam. 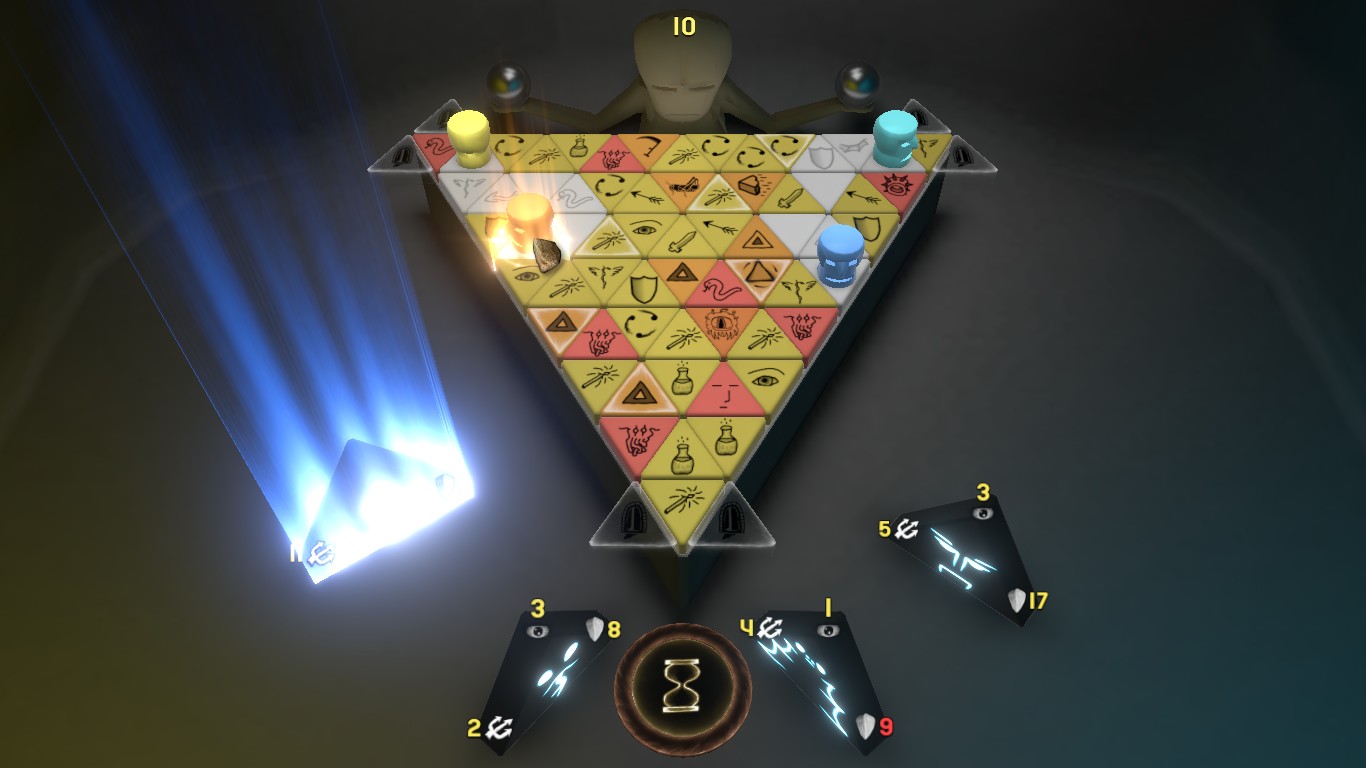 This game is under development, but current version (0.55) is already fully playable and user-friendly.

Please, share your impressions, advices, bugreports about this game. I will highly appreciate it!

When it ends on its own.

I've found a bug: sometimes game allowed to do multiple turns for the same player.

But in general, it's simple and nice.

Nice game, I like its idea. I think that this game will fit mobile devices the best.

I understand that it's just alpha, but, anyway, I'd like to put my thoughts about it.

Graphics. I'd highly recommend you to make higher-end graphics and change style from "low poly" to smth more pleasant for eye. I'm not against the "low poly" style, but when I see 10th+ game that uses this style, I'm like "Ohh, again..." If you have some folks who are good or who would like to train their skills in 3D modelling, you can ask them to help you; it's worth of it, because this game has potential.

Music and sounds. It just needs them both (:

Optimization. Despite the fact it has quite simple graphics, it runs too slow (I experience constant framedrops while playing it).

Gameplay. I guess you plan to add more complex puzzles with bigger maps. If so, then it would be good to have some zoom tool to zoom in and out to see whole the puzzle on the screen.

It would be great to have some level editor to allow people to create their own levels and share them with each other.

BTW, I don't see any economical part in this game (like "Stronghold" or "Knights and Merchants" have). For me it looks like just puzzle game.

Also, it would be good to have some calm, simple and unobtrusive background music performed it the same 8-bit / chiptune genre. I think that something like "Lode Runner" (NES) and "Nuts and Milk" (NES) have would fit "Upward". Appropriate music can make really great atmosphere in your game; moreover, it will continue playing in heads of people after playing the game (people will just associate game with its music).

And one more little remark: for less experienced players (like children or just casual players) it would be nice to have not so challenging levels at start: players feel more comfortable if game difficulty grows smoothly.

And one more, about new features:

After more than 1.5 years I have a little teaser for you all:

Yeah, all the listed is already implemented and I have a playable executable.

I just would like to say that I'm working on new version of "The Ancient" (the game I've uploaded during this jam more than 1.5 years ago):
https://itch.io/t/34313/game-update-multiplayer-ai-menu#post-412653

I think that the main shortcoming of this game is high requirements to hardware: it slows down drastically and it's hard to play it. I tried to play it several times and finally I managed to stay alive more than first 2 seconds (: In general, it looks interesting, but quite drab and boring.I think that sounds and music would make this game much better: when I play it I at least feel need to hear all these creatures walking around me.

I don't even know if I could call it "game": you just go forward and... that's it. Story ends. It looks more like some visual novel, but not exactly game. As consequence, it's not re-playable at all

In general, it's quite playable and well looking runner that fits the theme. It's funny to control that crown of people with giant block. It would be nice to have some dynamically generated levels in this game so that it would be re-playable. And music, sure (:

I wouldn't say that it fits theme very good, because history of cannons starts from X - XIII centuries (:

The game itself is playable, but it's too simple: difficulty is always the same. Plus game is absolutely silent.

Rooms stylized as chaos of box primitives, glowing dots and relics look quite charming and make specific atmosphere. But the gameplay itself is quite boring. I'd play it if there would be more what to look for or look at. Sounds of steps are quite annoying after playing for a long time. And, sure, it's too short and non-replayable.

Survival? Yes. Horror? Absolutely no (: IDK if developerplanned to add some nice graphics that wouldadd "horror" feature to it... I hope yes (:The game itself is playable, but its absolute silence and primitive graphics kill all the interest to the game quite quickly. Besides, I don't find any connection to theme. Controls really could be a bit easier; it's more like a game for arcade machines with some joystick than for PC or, moreover, tablet / mobile.

In about 2 seconds after I start playing it, it says "You embraced your faith". Is it normal behaviour of the game?

If anybody is interested, there is my new game I've just finished:

I've made it just for fun, so don't expect much from it (:

Welcome another one update of the game (: It comes with the features below.

1. AI: now you can play against computer; it's quite stupid, but it's funnier to play against bot than against yourself (:

2. Menu: now you don't have to memorize shortcuts (:

3. Nicer messages: some of them have been re-worked to be less annoying.

I've just updated my game. The main changes are below.

1. Multiplayer has been added: now game is playable over the Internet. To use this feature, press Alt+C after launching the game. The idea is quite simple: host player generates session ID, client player enters this ID; so host player should provide the ID to client player. It uses HTTP-bridge for data exchange; if anybody is interested in the bridge, I can provide you it's PHP source code.

2. Reorganized resources: now images and music are outside the executable.

3. Some bugs have been fixed, but I don't remember which ones (: Probably I also have added few new ones :D

Let me know if there are any issues.

In fact, personally for me "Slaves of Giza" is the best game I rated on this jam. Just because I find it the most playable. Sure, it's quite far from really completed game and my words shouldn't make you to relax (:

Besides, I would like to point on significance of team work: this is great idea to have people of different specialities who does their job nice. My game would look absolutely different if not my friend who helped me much with 3D graphics. Thanks, Sangeron! (: My initial design looks so:

The difference is obvious (:

Also I've learned that I need to study some new game engine, because capabilities of Game Maker 8.0 are too little for my current needs in gamedev. I like GM in general, but it's too old for me: GML isn't so convenient as, e.g., C#, it doesn't support Unicode (I'm speaking exactly about GM 8.0), very poor audio capabilities and it's not about 3D at all. 96.5% I will choose Unity3D (mostly because my current lap won't run anything heavier); moreover I've already played with it and had nice impressions.

I'm going to re-implement "The Ancient" with Unity3D if it has good enough rating after the ongoing voting. And I'm already thinking about some quick way to add multiplayer feature to current version of the game (:

BTW, this is my 2nd time I take part in gamedev jams. 1st time I took part in GGJ (unfortunately, offsite). There is the game I've made in 11 hours for the jam:

And, if anyone is interested, there are my past game projects I did implement at different times:

Thank you for nice tutorial and warm feedback!

I'd like to add some other things / features you can find in this game.

1. You can have no more than 4 minions; if you try to spawn the 5th one, it won't be spawned and corresponding red tile won't be activated (it will remain RED); it makes player not to spawn only battle minions with zero-awakening, but also to improve them with spells or to spawn minions with big "awakening" value.

2. You can skip move if you're in the very corner of triangle.

Sure, there are lack of effects that could make gameplay much more comprehensive. I had big plans about visual effects, but I've decided to concentrate on gameplay and make the game maximum playable. So, guys, sorry for "teleports" and out-of-design popup messages (: I planned to make player's victory epic by adding animation to the awakening ancient and collapsing mountains. It also would be nice to have multiplayer; though, it's playable even by Skype with screen sharing (:

In general, I enjoyed the jam very much and developing of this game was great pleasure for me.