The concept is pretty good and the puzzles are well designed. The controls aren't great though. It takes too long to move one tile and you have to keep pressing keys to move instead of holding them down to keep moving in a direction. This gets especially frustrating when you make a mistake that forces you to reset the level, like pushing a crate against a wall. I also think the music shouldn't restart when you go to a new level.

Good work though, there is surely potential for a good puzzle game from this idea :D

Great concept, and well executed! The BPM idea is explored thoroughly for a game jam game. It's very well presented too. The graphics are really nice and appealing, and the music is good.

The concept of this game is good, but the execution itself is really clever. If I were to make a game with this idea, I'm not sure if I'd come up with mechanics such as holding left to negate the right arrow. It's genius, and you end up playing twister with your fingers.

The presentation is great too. The visual style is simple but done very well, and shows you don't have to go bonkers to make something look nice. The pitch of the sound effects increasing with each subsequent press was a great touch too, it reminds me of Crash Bandicoot when you bounce on crates in succession.

Really cool idea! It's interesting that when the mode switches, the positions of all the entities stays the same, so if for example you go to shoot something in the FPS mode and it switches to the adventure mode, you might take a hit if you aren't fast enough. Great interpretation of the theme!

Thanks for playing ^o^

Bacon and I are working on an updated version with more features - such as controller support, new characters, modes and music, etc - and many gameplay changes, including a new attack and stronger enemy variants.

I actually wasn't aware of the window resize option but it's been enabled for the new version (why that isn't selected by default I do not know xD), and as for the comments on pacing, I'm having a look to see if I can find a way to maybe increase down time between waves, so hopefully that improves it a bit.

Honestly, I feel the same way about the gameplay and I realised it about halfway into it's development. It's pretty gimmicky and some of the activators, like the trip wire, are pretty pointless considering that pressure plates do a similar thing but much better.

As for the sounds, sound generally isn't my strong suit and it always causes me problems so good to hear feedback about it!

Thanks for playing my games ^-^

The size swapping mechanic is cool. It could allow for some really interesting puzzles. The random card mechanic is pretty interesting as well although I think you would need to introduce more enemy types, obstacles and hazards in order for it to work at its full potential.

I will say I accidentally glitched out of one of the rooms (the one with the spike traps moving up and down) by hitting the top of one and moving up into the ceiling. Then I couldn't get back in and I ended up falling infinitely. Obviously game jams don't give you much time to test everything properly, but if you continue to work on the game then you should have a look at fixing it.

Very cool concept for a game, and a really good use of the theme/limitation. The execution of the dungeon spawning mechanic is pretty well done, although at one point I spawned inside of a block - I guess that doesn't really matter much because the character can shoot through the blocks, it's more of a nitpick than anything.

I will say the sounds did layer on top of each other at points, so the game would randomly get pretty loud - I would recommend preventing more than 1 instance of a particular sound playing at the same time, for example, you could have it so that before a sound plays, it stops all instances of that sound which are playing first. Not sure if that's possible in Godot but maybe it's worth looking into?

This is an idea with alot of potential. I don't know if you've thought of going further with it, but I'm sure you could develop it into something really special. Great work ^-^

Glad you enjoyed it! We're looking into updating the game and a few of the issues you mentioned are already being looked into (we're planning to add a control mapping screen for both keyboard and controllers, and we're also looking at buffing the down thrust). As for the pocket sized thing, we decided to incorporate it into the plot of the game but it's not very well explained - we were going to have an intro cutscene but we ended up not having enough time, so it's only really shown in the ending screen.

Thank you for playing our game ^-^

Thank you! We've been making some small changes and we've added a way to skip the title screen. As for the ground attack, I added the projectile to make it stronger, as the air spin attack was alot more powerful than the ground attack in my opinion, and I wanted to give the ground attack some extra utility to balance them out. ^-^

Jowsty is a 2D arcade-style wave-based game about a knight trying to create a potion to reverse a shrink spell. 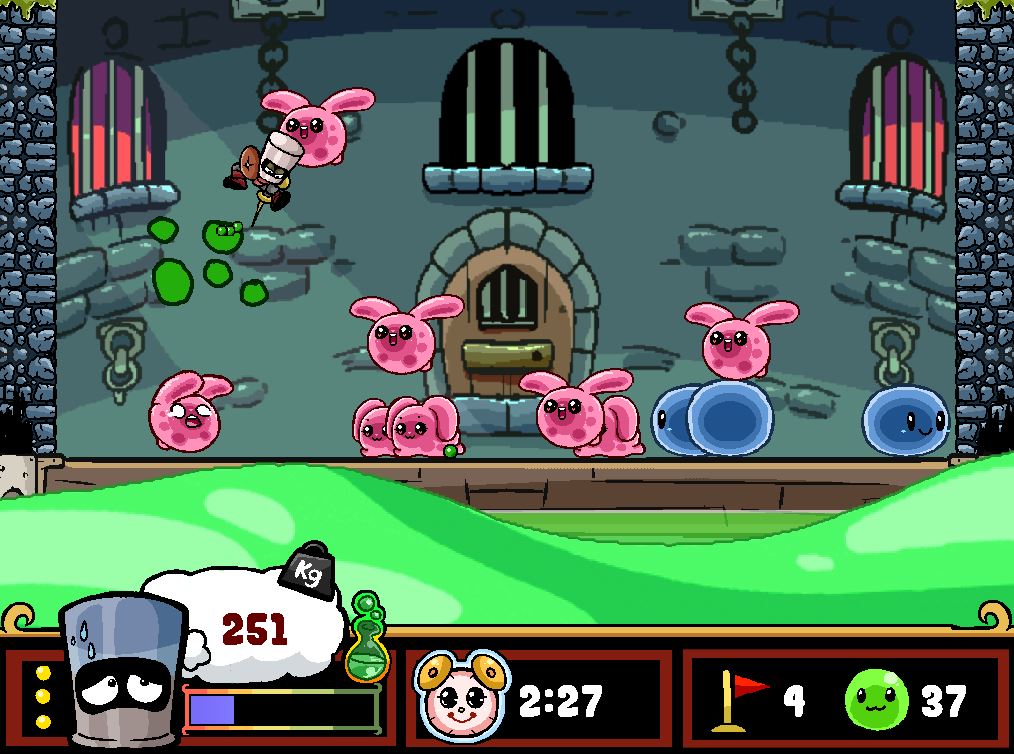 If too many enemies are alive at once, the platform will slowly lower under the weight and sink into a pool of acid, so you have to prioritise slaying heavier targets first to survive. But on top of killing enemies, you also need to collect the jelly they drop!

Thanks! Personally, I prefer having the option to control the height of the jump for any platformer, so I pretty much add it in by default everytime I make one ^-^

Thank you very much! The juggling is my favourite part of the game too. I'd love to try making a game entirely based on it at some point ^-^

It's an interesting concept, altho I found myself using the walk option way more than anything else. It could surely be expanded on very much into a really cool game! Great work ^-^

I think the idea is pretty cool and has potential. The controls could have been smoother but they work fine as is. Also, the character reminds me of an oven glove xD

Really cool idea! I can't think of another game with the mechanics this game has. I will say that I found the controls to be a bit frustrating to work with. For example, sometimes the character would bump into the floor after I tried to walk off of the top of a ladder.

I liked the overall presentation, although I think the spike hazards are a bit visually misleading. Maybe they could have alternated between being all the way up and all the way down instead of moving up and down so that its clearer when you can pass through them?

Visually this game is spot on, both in terms of animation and in terms of working around the colour limitation. Personally I think the stealth mechanic would have worked better if the camera fixed around the enemies in an area so you can always see which direction they are facing, but that's just my opinion. Overall, very well made and polished :D

Very cute game with an interesting mechanic. You also made great use of the limitation! Great work :D

Hi all! I just took part in the 41st Ludum Dare game jam, with my game Combo Maker!
https://the-mad-pangolin.itch.io/combo-maker

Combo Maker is a mashup of the match-4/beat 'em up/platformer genres! You can punch, kick and throw blocks around to link them together, scoring points and setting up chains! But beware! Monsters have entered the arena, and are trying to stop you... how many points will you score?

Really well done! Original idea, and the mechanics introduced later on keep it interesting. This kind of idea could definitely be expanded upon. Keep it up :3

Really cool idea, and decent execution! All the little details worked very well, like the paint splattering and the way the skull floats behind a little bit when you walk around. I would be very interested in seeing a version without the time restriction. Great job!

Really good job for just a week of work! The graphics are simple, but effective. I loved the UI as well, especially for the options screen. The sound compliments it really well too. Keep it up!