Thank you for the kind comment! I'll post another update next week. I am about halfway done with the monster roster for the first level of the game.

Thank you! I am happy that you like it :)
Tales of Greta was my stab at creating a game in the style of Donkey Kong Jr., and my current project, Tranquil, will be my Castlevania equivalent. Link is here, if you are interested: https://styrbjorn.itch.io/tranquil

Reply
itch.io Community » General » General Discussion · Replied to JelowGames in How to get a following?
styrbjorn1 year ago

This is also good advice. The same principle works for art - as long as you ride on the waves of memes you are more likely to get noticed. However, I am more interested in doing my own thing. Most likely, all I need is patience :)

Reply
itch.io Community » General » General Discussion · Replied to Dark Dimension in How to get a following?
styrbjorn1 year ago

Thanks so much for the great advice. I think I've got at least social medial somewhat covered, but I could definitely get better at that as well. As for community interaction, I guess I have to admit it has been quite one sided - I post stuff and hope that people will notice. I seldom reach out to others or discuss things in forums. Jams are fun, but kind of intense - I have participated in a few and it's been interesting for sure.

Reply
itch.io Community » General » General Discussion · Created a new topic How to get a following?
styrbjorn1 year ago

Up until recently, most of my projects have been for learning purposes only, but two weeks back I started on a game that I have been wanting to create for some time. Instead of working on it in isolation, I thought it would be interesting to post a devlog to (hopefully) get people interested in the project. I am noticing a trend now, after the fourth update, that I am not getting as many views as I did with my first update.
My question is, is this normal? Content wise, I feel that my later posts have been more interesting (more screenshots, etc.), so my thought is perhaps Itch boosts your first release of a game (even if it's not finished), while any following posts do not get this boost?
Either way, it would be interesting to know what's the best approach to get a following, since somewhere in the not so distant future I would love to get some testers for my game. 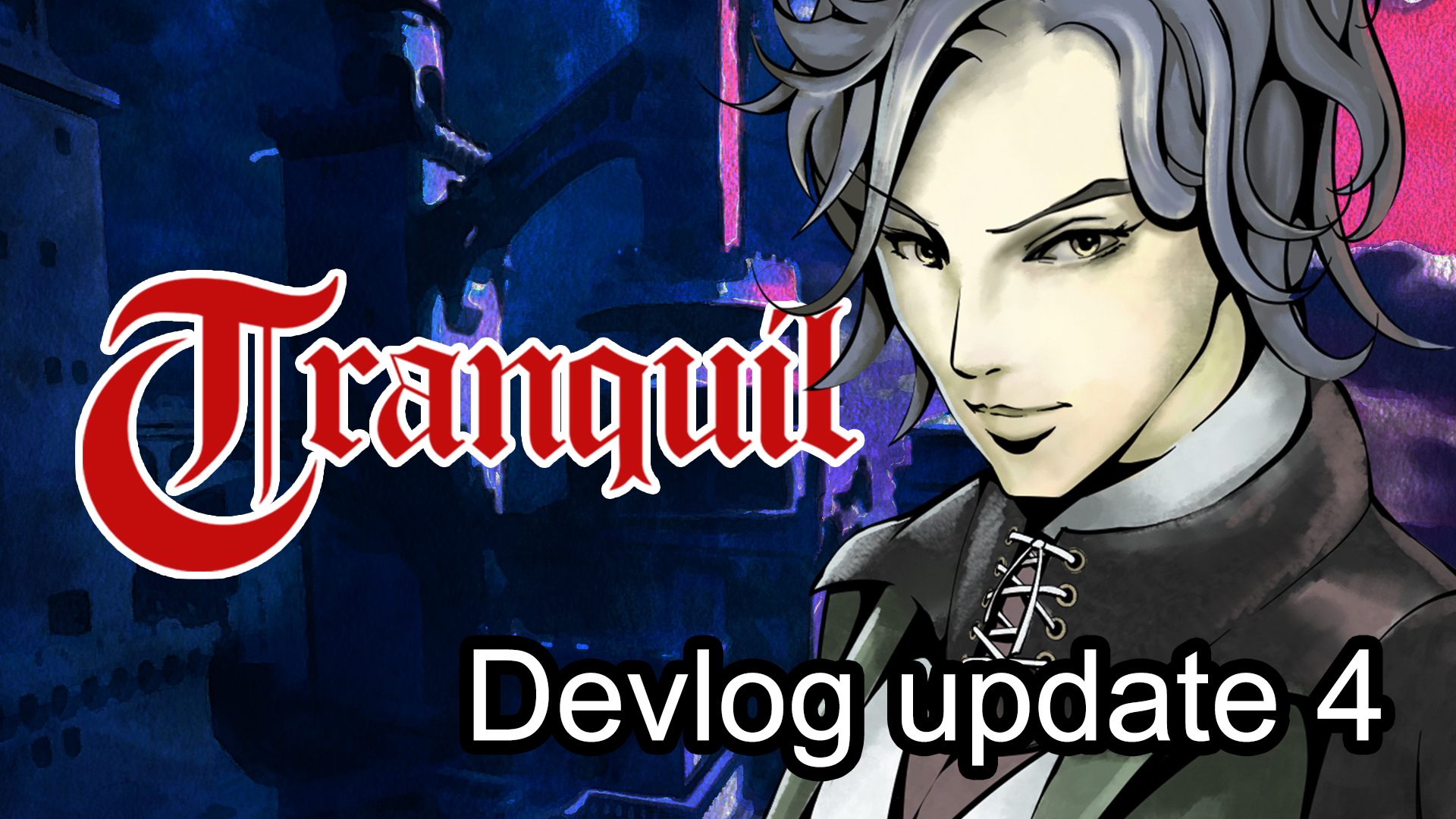 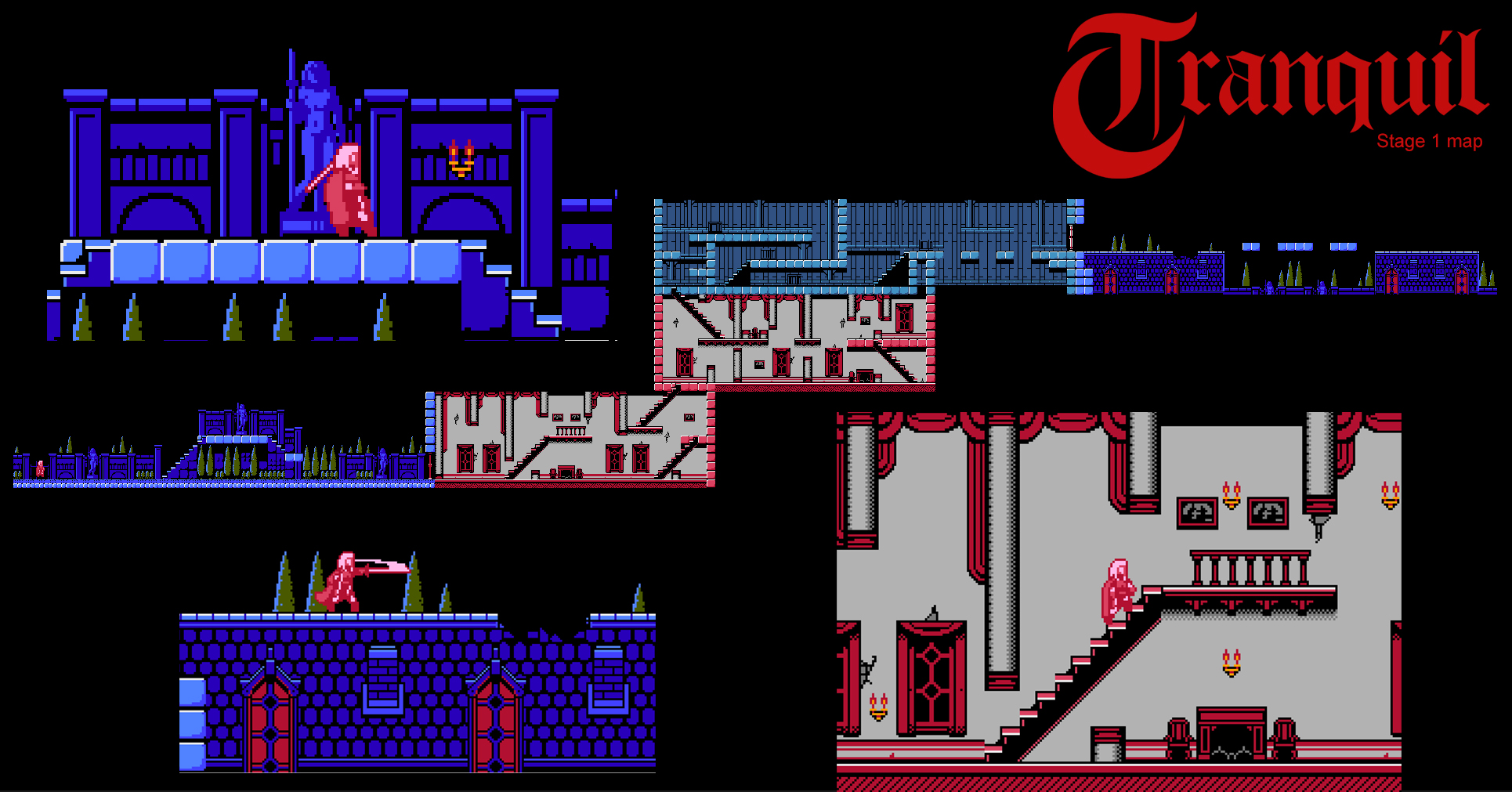 I've been hard at work drawing the tile set for the first stage and finishing the map. Also, I have added a music and sound system, that seems to work to my satisfaction. While testing, I noticed a weird camera stutter, and realized this was due to the player having decimal speed. Given that I use a pixel perfect camera, this causes stutter. Also, the player moved a bit too fast, so I have adjusted the speed to an integer.
To see more of my progress, please visit my game page, here: https://styrbjorn.itch.io/tranquil 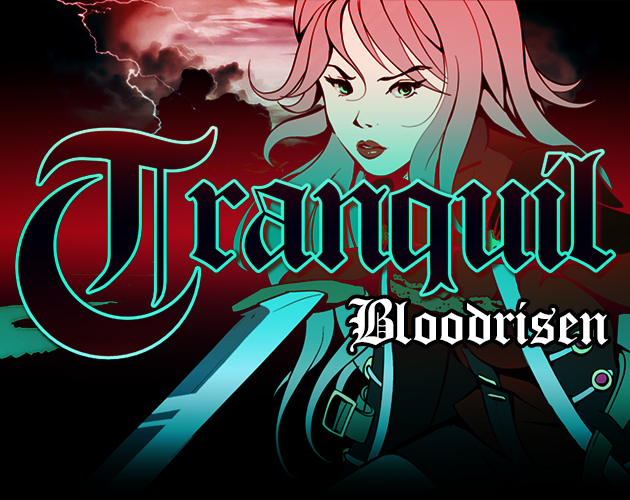 I want to share my progress on a game that I started developing last weekend.

Tranquil will be a side scrolling action platformer game with a gothic setting. The game pays homage to the classic Castlevania games from the 8-bit era, and I have just finished the core movement for the player.

So far, I have created concept art for two of the characters: 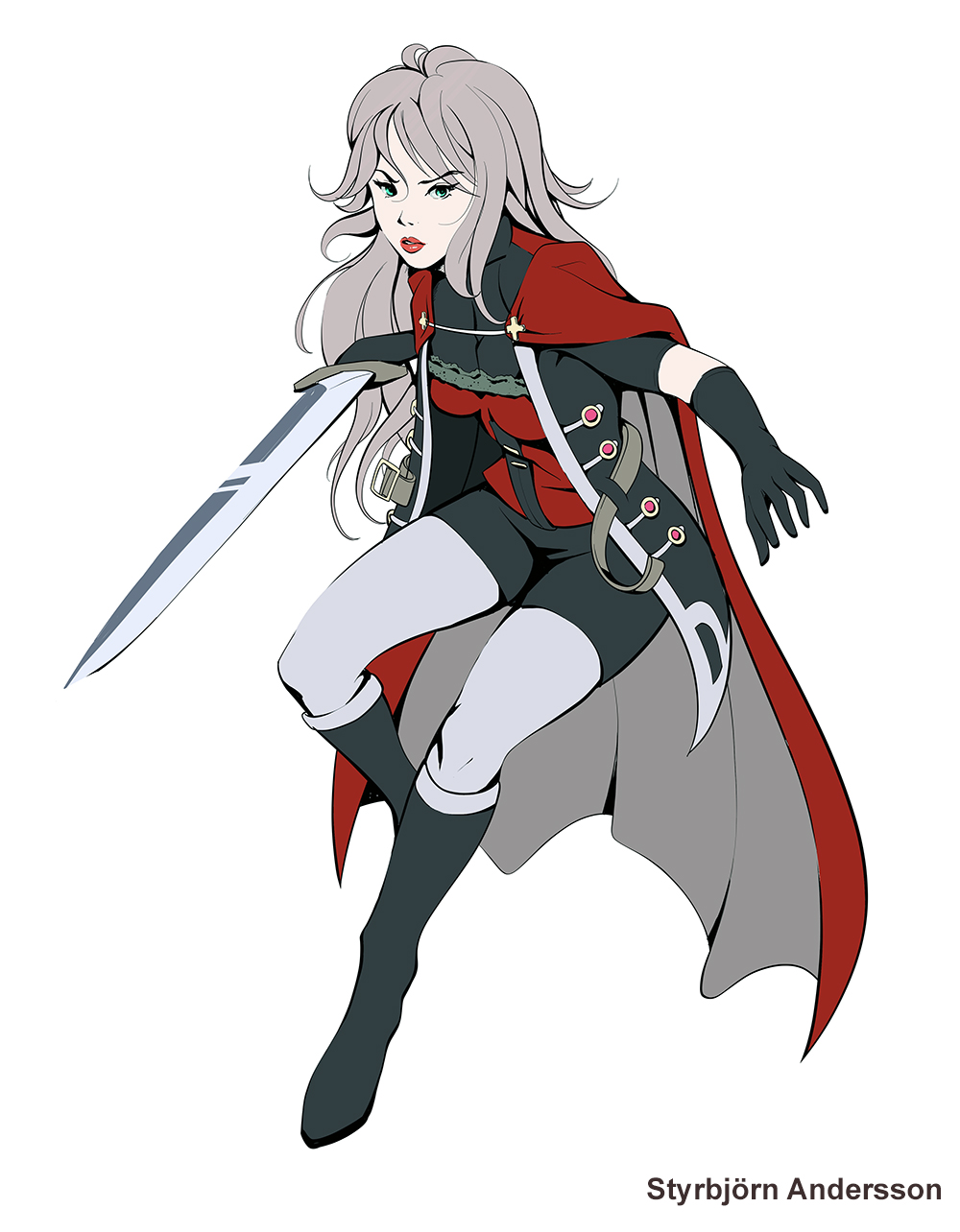 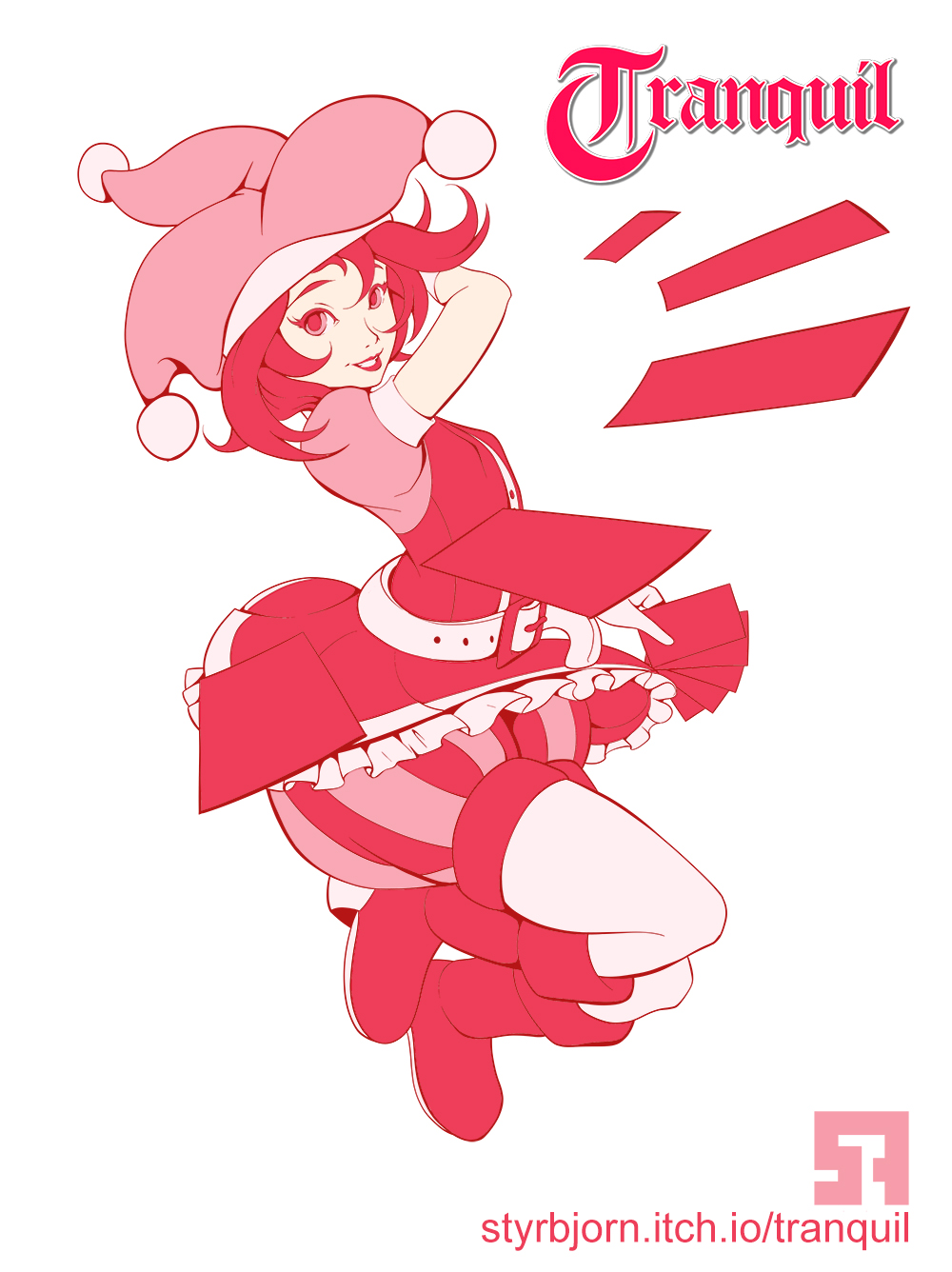 These images, along with one more (of the character Virgil) will be fully shaded and put together into a "cover" image of the game.

The sprites for Ophelia are also completed: 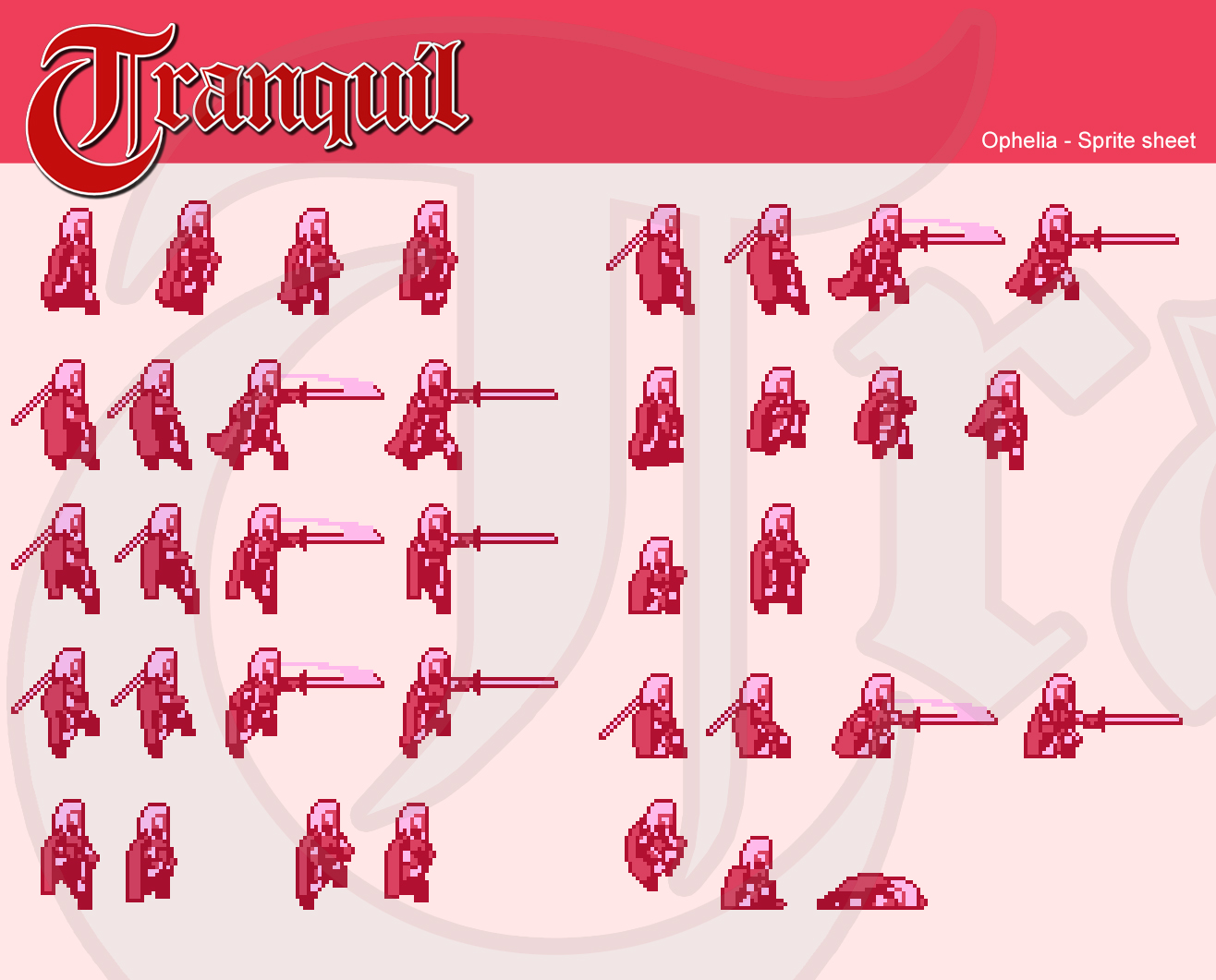 Here is Ophelia standing in my current test environment: 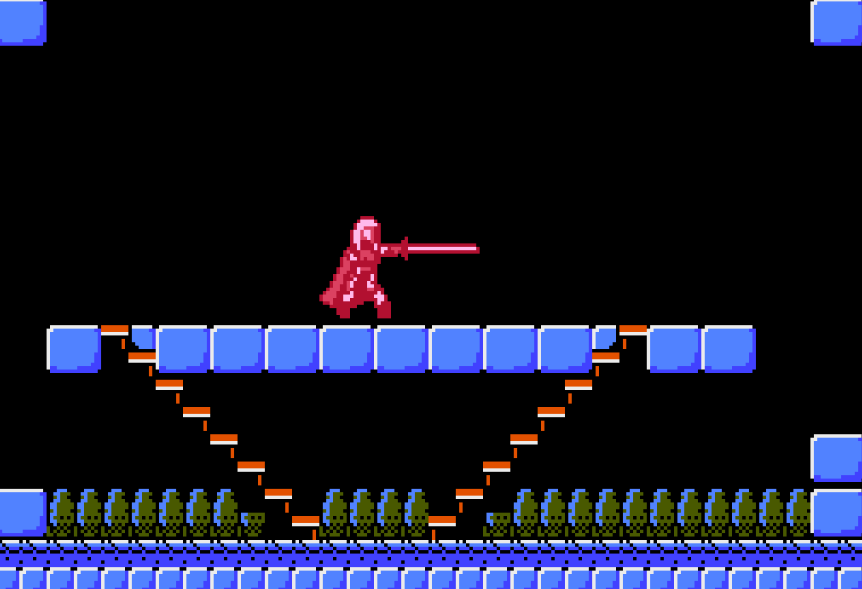 In the long run, it would be really great to have some people following this project, as I am likely to need feedback and testing along the way. So far, I have nothing released, but my first definite milestone is to release a demo of the first stage here on Itch that people can try out.

If you are interested in following the progress of this project, please check the game page out here: Tranquil by styrbjorn (itch.io)

Hi! Thanks for the thorough review and the great feedback.

The reasoning behind Hilda being a witch is that this project is based on the "Number Wizard" part of a Unity course I am attending. I wanted to change it up a little, but not too much :)

I could have developed her witch side more, and it's probably something I would have done if this was not just a Unity programming exercise. The same goes for adding more depth and dialogue to the gameplay. I might create a "sequel", where I explore how far the concept can be pushed.

Regarding the genre, I was not sure what to choose. I'll have to give that more thought next time :)

Thanks so much for covering my game on your channel! It means a lot, and is certainly a nice motivation to continue the story :)

Thank you, and apologies! I had posted a link to the video, but I missed that you could embed it. I have fixed that now.

Squad SGD is a small breakout game that I made as part of a Unity course I am attending. You play as a young fox pilot working in a "recycling belt" where you destroy trash containers.

I would love it if you try the game out and tell me what you think of it :)

Thanks! Yeah, I guess the reason I never considered adding options such as muting, resolutions etc. is that this was just a practice project. Had it been intended as something I expected people to play over a longer stretch of time I would have taken it into consideration :)

Good job! There are some spelling errors that you might want to fix, and the text box telling you how much energy you have seems too small to fit the entire sentence sometimes. Otherwise it's a neat concept

Believe me or not, but that exact quote was on my to do list. Then it slipped my mind somehow :(

It depends on what you would deem bad, but I'd say there are no bad endings, except if you end up at 0 rep and get a game over :)

Thanks for streaming my game - watching others play is really nice feedback!

Thank you! We tried to work as much as time permitted on the dialogue. Having 15 characters reacting both negatively and positively on 14 items meant a total of 420 responses, so in the end we had to settle with a bit less than optimal. A possible development of the system would be to hard code only a handful of meaningful responses (the genie and the lamp, the cross and the vampire etc.), while creating a pool of random neutral, positive and negative responses that can be used regardless of character. This would make expanding the character and item pool far less punishing, and it is something we might look at later on.

Thanks for the constructive feedback. The behaviour you describe seems like it's not intended. I'll take a look at it. Most often, a 0 is the result of a negative and a positive response cancelling each other out (a +5 vs a -5 for example). Generally, this is one of the things I'd like to improve on, as getting 0 is quite frequent, and not really exciting. One idea I have to alleviate this is to have the faction reputation affect the reactions - a positive reputation could mean less of a penalty for a bad decision, for example, resulting in a greater variety of number and lesser risk of numbers being the same on both sides.

Thank you - I am glad you liked it!

Reply
Yogscast Game Jam community · Posted in GIve me games to PLAY!!
styrbjorn2 years ago

Here is our game, if you still need something to try out :) https://itch.io/jam/yogscast-game-jam/rate/535595

Feel free to try our game out, and give your comments on what can be improved! https://itch.io/jam/yogscast-game-jam/rate/535595

Thanks for giving your feedback! Given the time frame, after making the decision to create all code and assets from scratch (including music, which usually takes a lot of time for me, even with simple tunes), going for a very simple style was the natural way to go to finish in time. The goal was to create a framework for a game, to see if the concept worked, rather than building something polished. Nice thing is I have received some great feedback regarding improvements, so I might definitely flesh the concept out both content and design wise in the future.

Thank you for the kind comment, and for taking your time to play the game!

I like the idea. Fell out from the map one time.

A very nice concept! It was fun to try and get by several "throwers" with the letter.

Fun and hard at later levels.

A fun game to play but I got stuck on the level with two fans and two fires.

Sweet and simple. The music works well for the game style. Like someone else pointed out, 8 direction movement would have been nice control wise.

Simple and fun! The strategy that worked best for me was pretending that the game was a clicker, and spamming a few hundred presents down the first few chimneys.

Nice job! I found using the shooting enemies as a meat shield worked nicely for the boss, since they blocked they boss attacks.

I found this quite enjoyable. Stabbing people never gets old.

Great style! It reminds me of Downwell. The random level generator can be rather punishing at times, but depending on design goals that doesn't have to be a bad thing.

This is a fun idea, and it would be really interesting if expanded upon (like, getting to know the family members, so you can better decide what to buy for them).

Interesting take on the Breakout concept.

As a parent I might be biased, but crushing kids with presents is a really relatable concept to me! Interesting perspective you are going for, although a bit confusing at times :)

As a parent I can relate. Fun concept :)