Might I ask how did you implement the reverse replay/clones mechanic? Do you keep transform changes and reverse them or something else?

Awesome entry, congratz on the win.

BTW. diagonal movement is probably not normalized (I actually noticed only on the win screen though).

Wow, our take on the theme was very similar :) (though I made mine partially realtime and undoing is a part of the puzzle in later lvls).

I love the lava blocks idea and your game is just way more polished and offers more levels. Congratz on the win.

I take it the input switching (switch to mouse to use a new module, move hand to arrow keys and back) are are disorienting on purpose to make the gameplay even more hectic?

The only thing I was missing was the promised explosion when I died :D

I was quite pleased when I thought of the CTRL-Z :)

I don't think this could go much further, at least not with the CTRL+X command, which would break most later levels. I could cut (teehee) the command or introduce it much later though. I've actually just started learning pixel art (see the updated cover image for the game :) ) so I could use this as a case study.

Anyway, thanks for taking the time to play it and give feedback.

That's a great point. I originally planned for a slider to control the speed of the level (the code actually works, I just didn't have enough time to put in an UI for it... ). Though rebinding would break the theme in this case.

The amount of juice is unreal and you were not lying about the railgun - it's just so cool!

The amount of particles and screenshake could be taken down just a peg as the readability of the level was not very good or maybe that's just me.

It seems like the supernova doesn't trigger for further levels  either, at least it didn't trigger in 4 for me and 5 unfortunately bugged out and enemies stopped spawning.

I love the idea, but I'm not a fan of, and that may be just me, mouse driven movement. That coupled with the inability to actually aim and the enemies' projectiles being so hard to dodge meant that I couldn't clear even the 2nd lvl even though I tried a lot of times, but the best I got was around 9/14 carrots.

If it were KB to move and mouse to aim I'd probably do much better, though maybe it would have been too easy then.

Also the penalty for just touching the wall is so harsh. Maybe you could put the player on a timer and crashigh into a wall would slow them down so that they would have to balance getting hit & crashing to acutally just make it in time.

To be fair, I'm terrible with the mouse and much prefer KB/gamepad, so take my whining with a grain of salt :)

I really like the dodge or shoot mechanic and having a turret as well as an arced projectile is really nice, but I can't say I'm sold on the main mechanic. It  Once the player loses the turret it just goes downhill from there and the last part of just not being able to shoot and losing sight is just cruel. Also, the player is IMO too big for the enemy bullets.

It could be a really neat arcade game, but the take on the theme ruins it for me. (Reward the player for skillful play, don't punish them this much for being bad).

Such a simple and ellegant premise, yet there are so many neat levels and the execution is on point and it fits the theme so well.
The tutorial levels are done so well. What actually took me the longest to grasp was the main mechanic.
I expected the short music loop, although really nice, would get on my nerves, but it didn't.

The only thing I was missing was the ability to look around the level, but the levels are short enough that this isn't a problem at all.

This is just drop-dead gorgeous, both the audio and visuals.

The platforming feels pretty good, though I missed coyote jumping and wall jumping with the wall direction blocked is just weird. A lot of the levels would probably be more fun without such restrictions. The puzzly ones were great, but once it got to skill based lvls, than I'd probably have more fun with regular platforming.

Also, there's just too many levels for a jam game IMO. I got thru 2 worlds which took quite a while.

The easiest way to get to the boss was just to run without throwing any potions. I dies a few times without having no idea what actually happened (some kind of timed potion? Couldn't tell ya...)

Got a crash (on death I think):

My head hurts but in a good way.

I almost missed the dash instruction, other than that it's great. There're quite a few games with timed jumps, but this makes the timing much easier and more satisfying.

Once I got a hang of it, it got kinda fun, but the random air jumps resulted in quite a few cheap deaths.
Given it's a game jam, there probably should have been a checkpoint for each part.

The main thing I'd have loved to see is a death animation -  seeing Bob be reduced to a pool of blood after he jumps into the saws for the 10th time in a row like the idiot that he is would bring me great joy.

In short
Bob is dumb, your game is not.

Here are some minor points

That all being said let me clarify this game is amazing in every aspect and I have a strong suspicion it's gonna be one of the winners. Also, the corpse from the previous run is just great.

Just glorious (and really fun until I figured out a simple way to evade everything).

Love the  music and visuals and the challange. The difficulty curve could be a bit smoother, the spike colliders a bit more lenient and the jump bar closer to the player, but other than that it's my favourite entry so far.

Your games are always so good!

BTW. R U gonna enter the next LD? 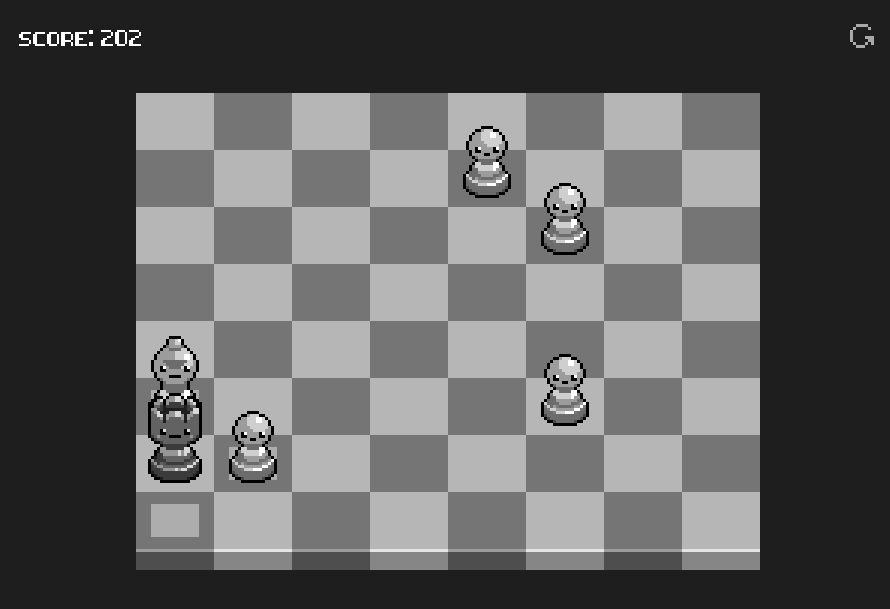