Yeah, that part is not very intuitive. I think I suffered a bit from trying to cram everything into one single level. But my process for creating levels was so painful that it just wasn't realistic to make more. Thanks for playing!

It seems that we would need your local fork of naia as well.

Ah, that explains my confusion. Seems a bit unintuitive even with the description.

I also skipped summon water with double jump after visiting the water area and not quite putting two and two together.

Impressive. The most realistic parts were when myself and/or a line of code would fall through the world never to be seen again, or I would complete a task correctly and well before the deadline but be reprimanded anyway.

Impressive amount of stuff going on in this thing. Some thoughts while playing:

Pace was a bit too slow for me to want to continue after failing a run. Potions being time-based when the rest of the game is very turn-based seemed off to me.

Having multiple music tracks to choose from was a nice touch, but they all sounded very samey to me.

Typos in the combat text were a bit glaring.

I'm glad I came back and spent some more time on this one. This seems like it could be the seed of something really interesting. Here are the thoughts I had while playing:

The controls were frustrating enough, especially when piloting a fleet with ships of different speeds, that I wondered how this would be with no controls at all, as more of an idle-game experience. Or maybe with more generic controls like "stay near this point and defend" or "go over here and mine."

The laser graphics scaling were really wonky with higher power lasers, and destroying rocks that were completely off-screen wasn't great. On the same topic, waiting 10 seconds for rocks to wander onto the screen wasn't fun.

I think that the bending of the game towards the jam theme may have actually harmed gameplay a bit.

Something seems a bit off. Had 2 red and 7 blue on the scale but somehow hit exactly 25% red.

Sadly got stuck on a random board with no possible moves.

Thanks! It's not very obvious, but if you follow up a front flip with a different trick like a back flip or double-front-flip, you get a longer boost. Try to sneak in tricks when you can, even between the "jumps" on the map. Staying low (jumping well before the crest of) the hills in the second section helps.

Really appreciate the feedback. Thanks for playing.

My goal was to have a short but very polished experience. I was committed to not building multiple levels and a level select screen, so I was trying to "do it all" in one level. I had competing goals of easing newer players in and making a competitive  skill-based leaderboard.

I also worked pretty hard to optimize iteration time when modifying the level, but my totally manual inkscape -> blender -> gltf pipeline took something like a minute to execute even after I got pretty decent with blender's hotkeys, so it was a huge time sink to tweak the level.

The final jump is sort of ruined by the jumping physics. If you just roll over it without jumping you can clear it no problem even at 69kph.

Jumping on an angled ramp pushes you backwards and kills your speed. I'm at a bit of an impasse there and I'm not really sure how to fix that. I had some last minute tweaks that made the jump easier but didn't go far enough. I think the impulse I add should just be in the direction of the "vertical component" of the player's orientation. But by the time I was figuring this all out I felt that it was way too late to be making major physics changes that might have unforeseen consequences.

No tricks are required to clear the level. Just hold forward for a bit, and then backwards for a bit. But the base speed does make that a bit boring.

I'm not sure if having to rebuild the machine after every attempt is adding to the fun. Was super confused by the controls and the broken web rendering, but I won!

Thank you! I may have gone too far balancing the boost when I started keeping track of whether or not the trick was the same as the previous trick and adding a bonus when it's "fresh." It's pretty easy to stay boosted on the first half of the track, but the middle's not as fun.

Seems like this could be fun with some sort of mad max / zombie apocalypse theme.

I think this could be a pretty fun little game with some polish. The generated levels are lacking a bit, and it was frustrating that when I failed a level, I never got a chance to fix it. Although maybe if that's intentional, some sort of larger gameplay goal (even if it's just speedrunning 10 levels in a row or something) might help.

This happened to me when I won 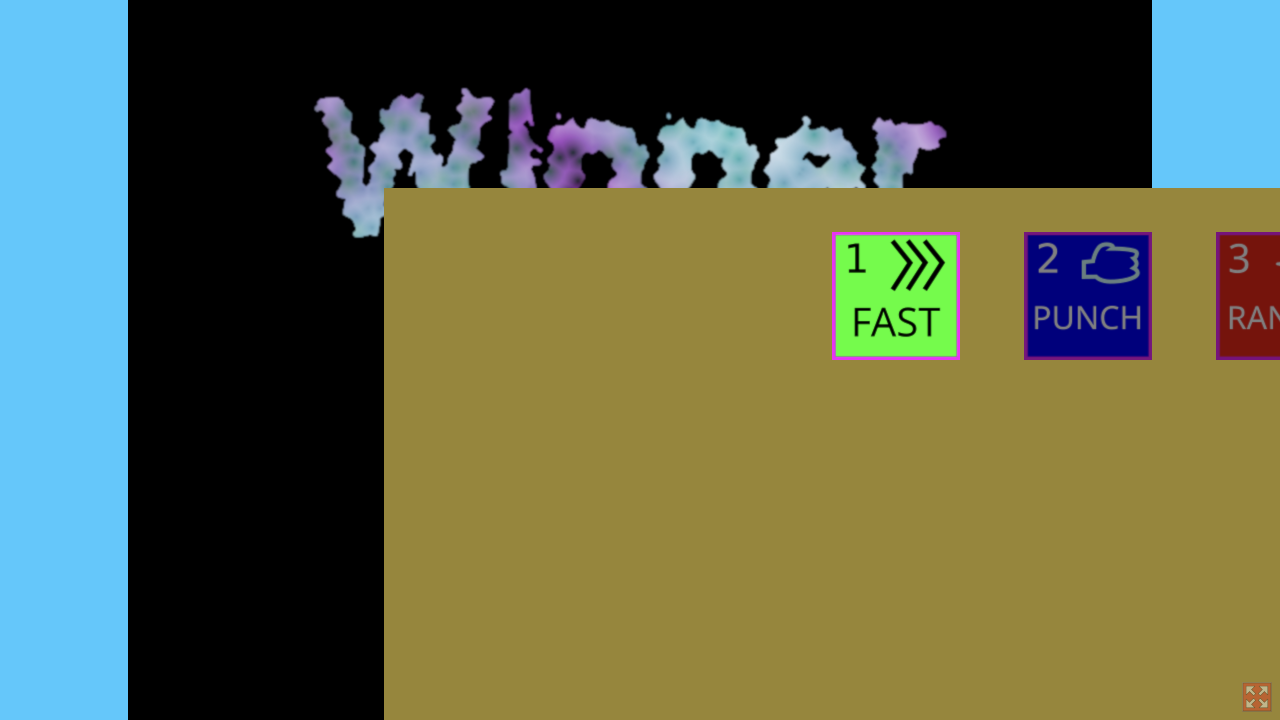 Great work submitting a complete game with multiple levels! Controls were pretty frustrating for me, and I managed to get myself stuck on Heap. 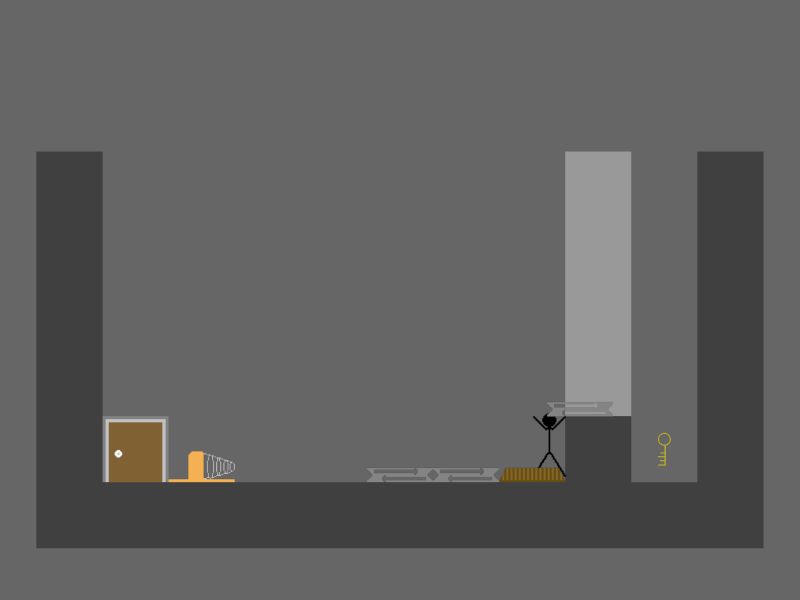 Seeing this in chrome/firefox/macos. The situation continues into the game. Maybe some sort of issue with high dpi displays? 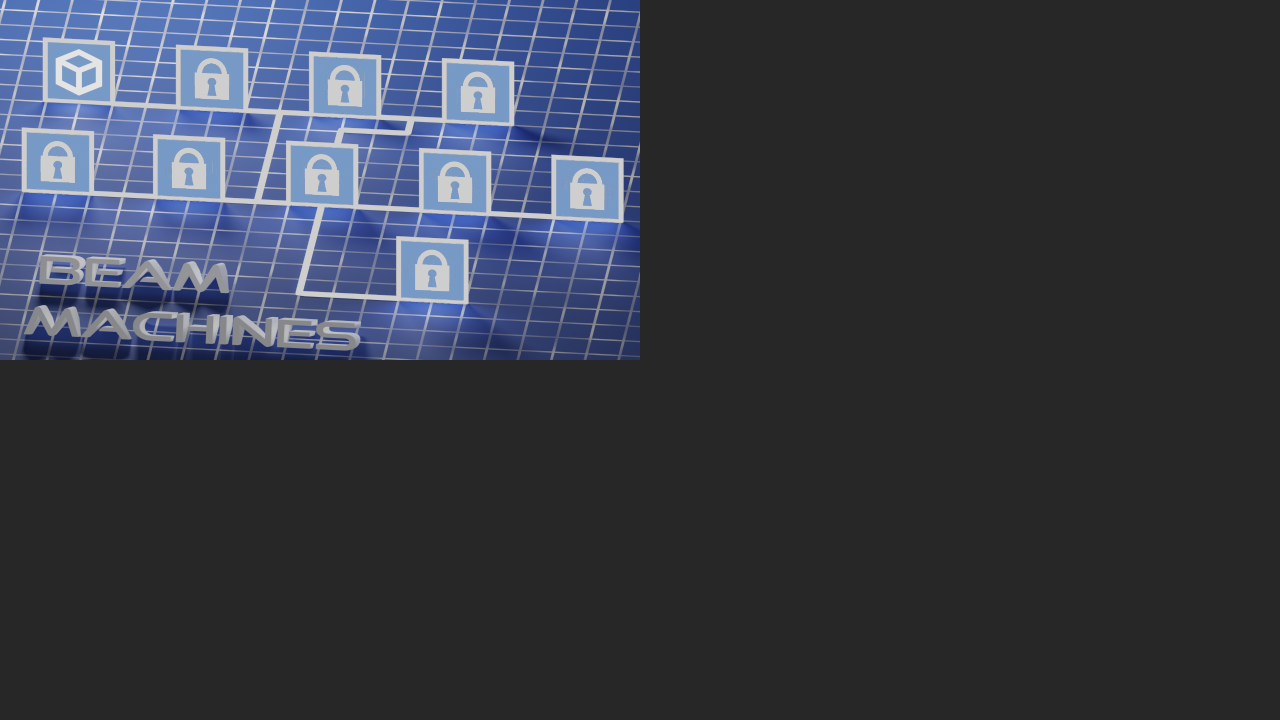 I also experienced a "freeze up." The game seemingly stopped responding to inputs, but the music still played. This is the only notable thing in the javascript console:

Super cool entry. I didn't read the description and was only combining like-units for a while and wasn't feeling as enthusiastic. But I when I accidentally made a healer, the game was on! Really enjoyed the bullet-time while dragging units around too. 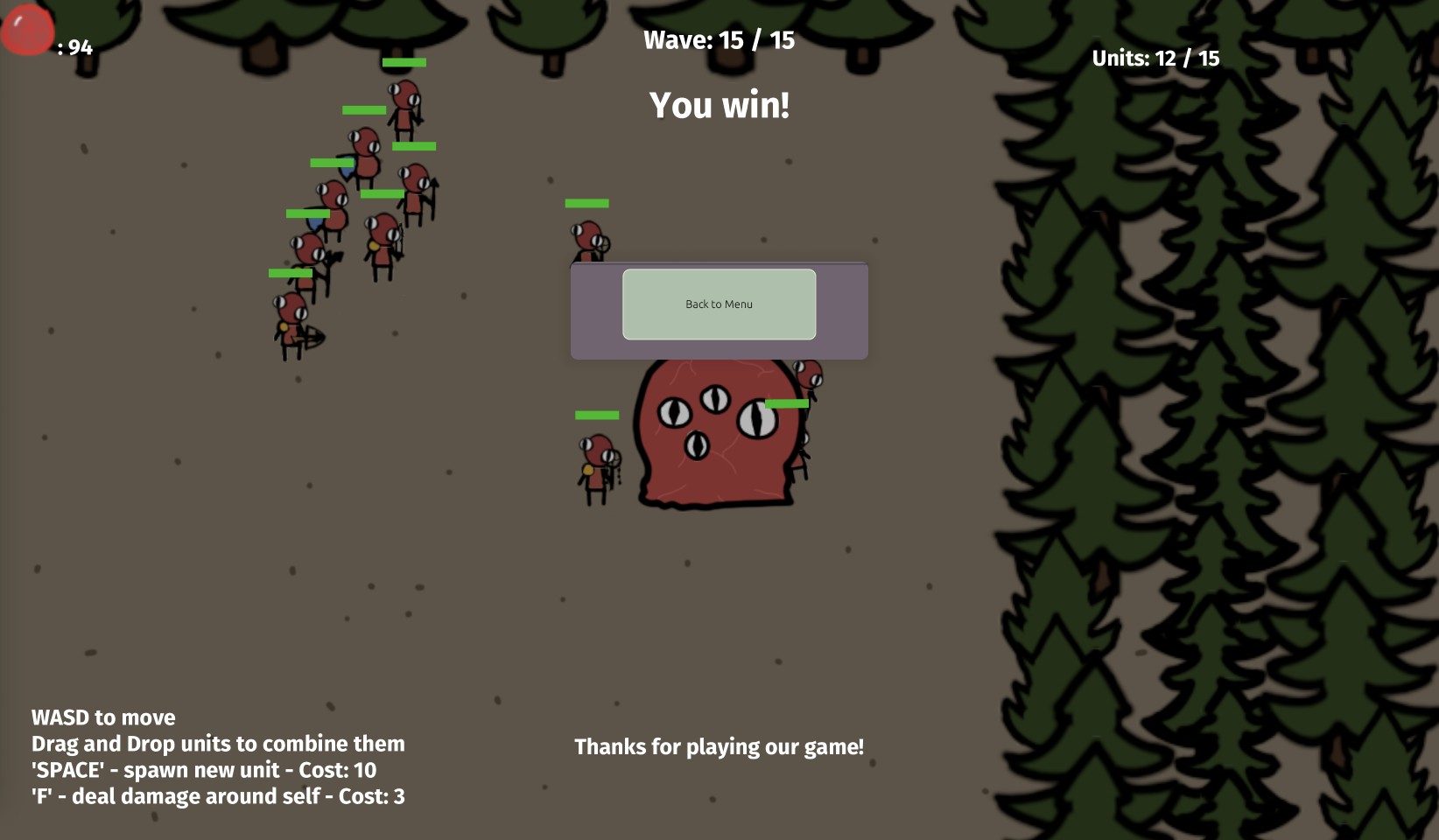 I wish I would have discovered the alternative rotation controls before giving up on level 11. "Scrolling" to rotate on a trackpad was a pretty frustrating experience.

I played this a little bit before the deadline, and the amount of polish you managed since then is impressive.

I had to bow out because the camera (perhaps combined with my poor steering) was making me physically ill. Neat to see some basic spatial audio being used though.

There's quite a bit here for a couple days of work.

I got hit by this panic:

error[B0003]: Could not add a component (of type `bevy_tweening::Animator<bevy_transform::components::transform::Transform>`) to entity 575v8 because it doesn't exist in this World.'

I had a lot of trouble winning and was convinced that there were 2 hidden animals somewhere. I'd always come up 2 short.

On one attempt I saw an animal fly past the screen. Maybe some sort of physics bug was ejecting them from the field? Not sure.

Eventually it just worked though.

There's quite a bit going on in this thing. Good work putting all that together! I think that the visual feedback from spells could be improved. It wasn't always obvious if enemies were actually being hurt, or where the hitboxes were. Also, those water dudes are OP. 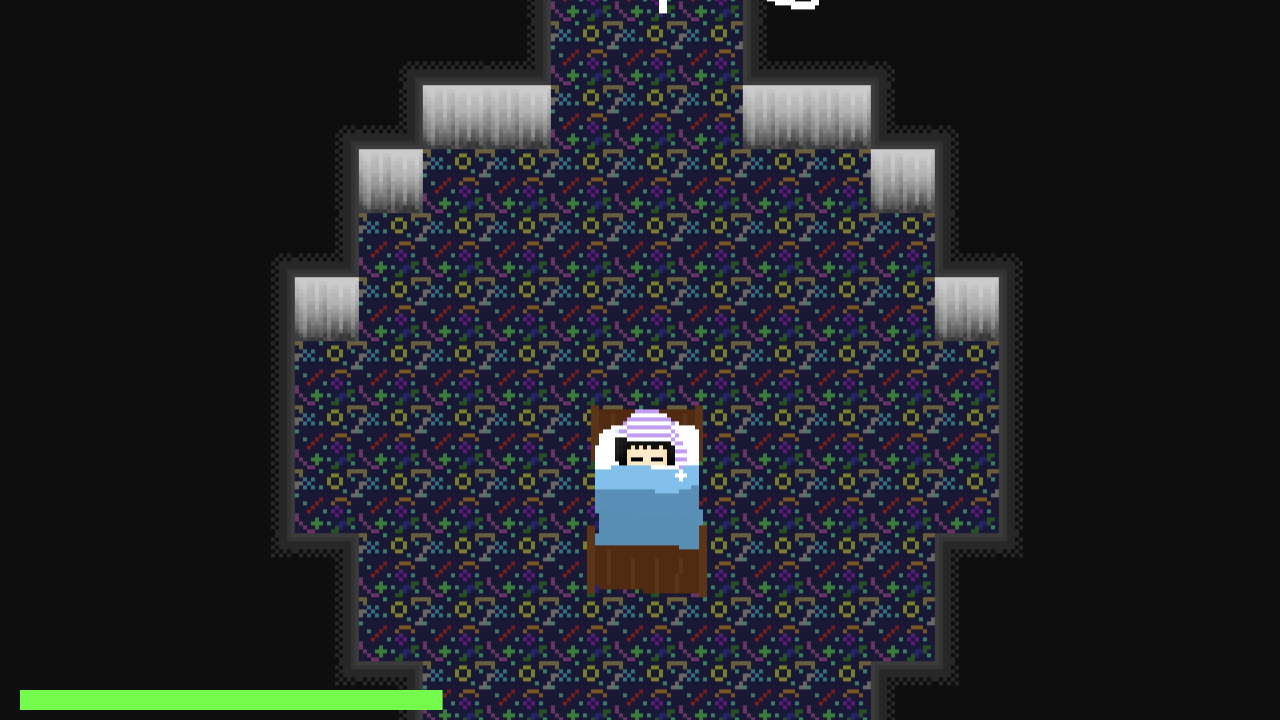 Bowing out at 12%. Doesn't seem too bad if you're lucky and get a decent gun early on. Not super easy on a trackpad though!

Happy to see a typing game in the jam. Usually that's my job, haha. I agree with JacquesJ's feedback.

Congrats on getting a working game published!

The gameplay seems to be a bit heavy on just waiting around for the 1/13 RNG to go your way so I grew bored pretty quickly.

Unfortunately unable to play/rate with no mac build and no source code.

Great showcase of Bevy's capabilities and a nice little puzzle. I had no issues with the web build on an m1 mac in chrome.

Had the same general experience as Nathan-Franck.

Sadly unable to play/vote with no mac build and no way of building a godot game from source.

On the one hand, combining bevy and godot feels like the ultimate application of the Combine theme, but on the other hand, the jam rules mention Bevy Engine rather than Bevy ECS, so I am not entirely sure this is keeping strictly to those rules. Not for me to say though, and I still would have liked to have been able to check it out.

Thanks! I completely agree that the velocity damping is out of control. I had to give myself a moratorium on physics tweaks at some point because I was afraid I'd break the game in some subtle way. But it's something I want to play around with post-jam.

I do feel that the road could use a subtle stripe texture or something. On flat sections of track, it can be hard to tell that you are moving. That's one reason I left the cliff to the left at the start of the track.

Unfortunately, this was a rather frustrating experience for me. More-so because the concept is right up my alley.

I don't have a delete key, so I was playing on hard mode for a bit, but got impatient while learning how to play without a way to remove a tile or restart a level.

So I peeked at the source (would be nice if it were linked here) and saw that there were gamepad bindings. But down, left, and right are all bound to d-pad down.

So I am playing with the gamepad next to my keyboard so I can occasionally press the north button.

The cursor could really use a preview of the tile being placed.

If I pick up a tile, move it left, and drop it, it would be nice if it ended up in the same orientation.

The Merger orientation is important, but its tile graphics give no indication of this.

I also spent a good long while thinking that it must be the distance between the emitter and the Halver that determined the phase of the halved beam rather than the orientation of the halver.

That said, at the end, I was wishing for more levels. 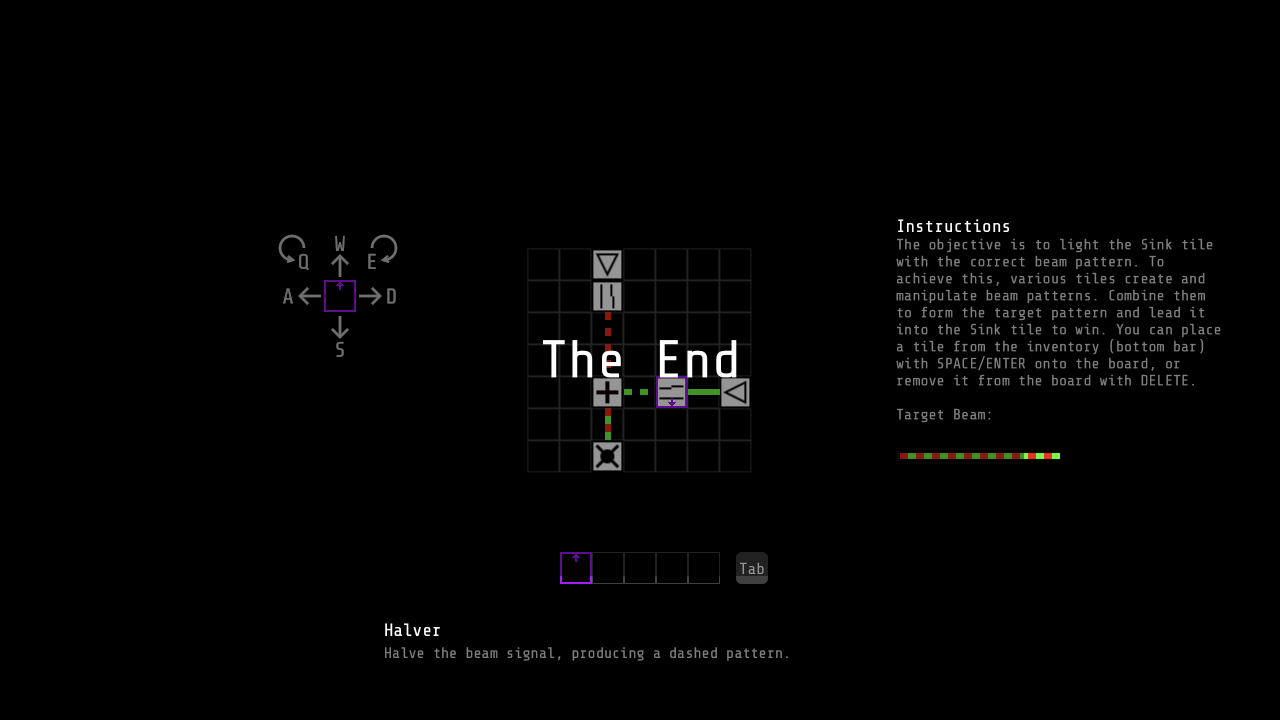 This hurt my brain a little bit, and things weren't working quite right on my machine with a high dpi screen. Cool to see the new bevy tech though! 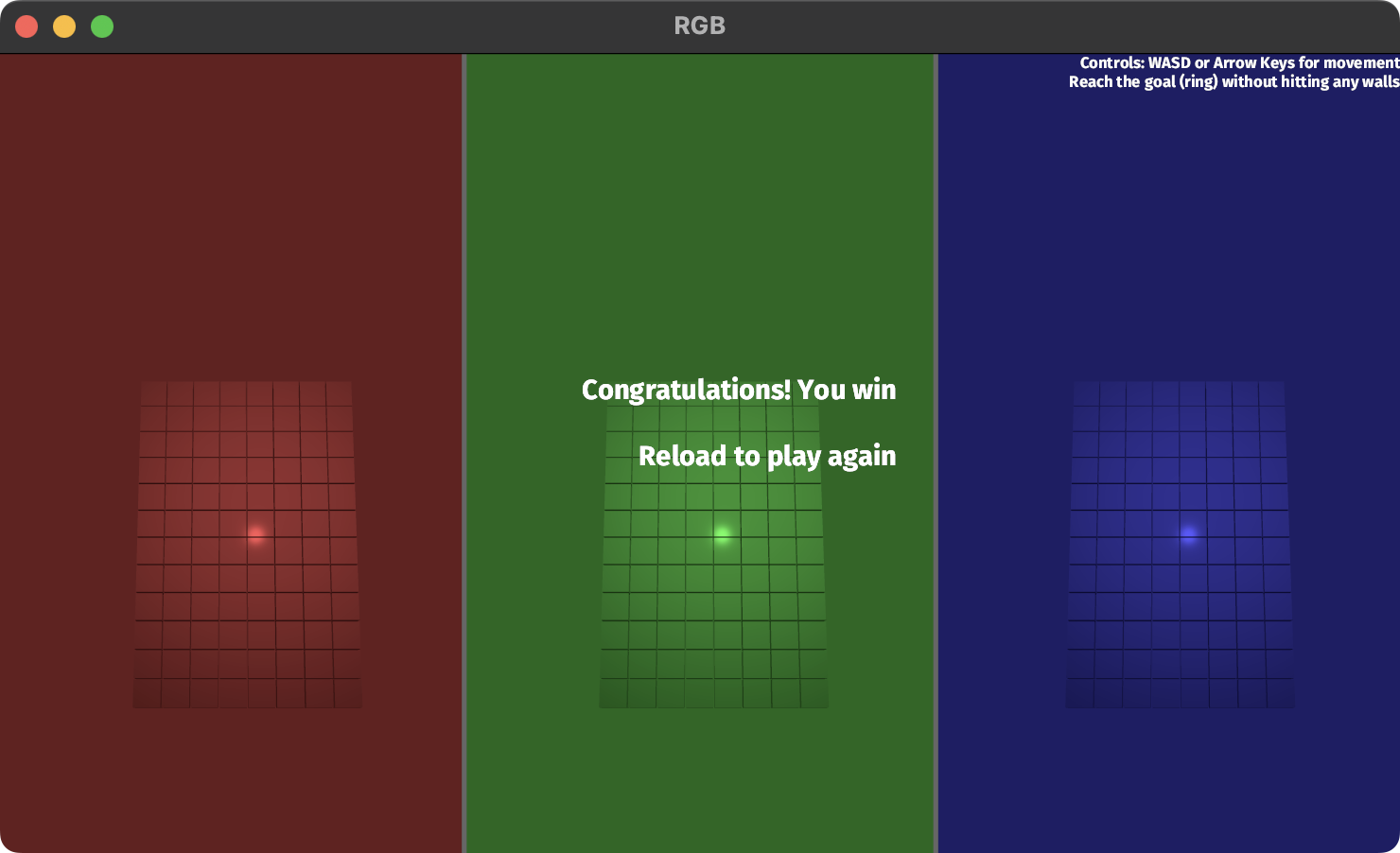 Well done. Exciting to see bevy and its ecosystem coming together to make experiences like this possible in jam-timeframes.

I went through the game without knowing about the 1/2/3 keys. Oops. 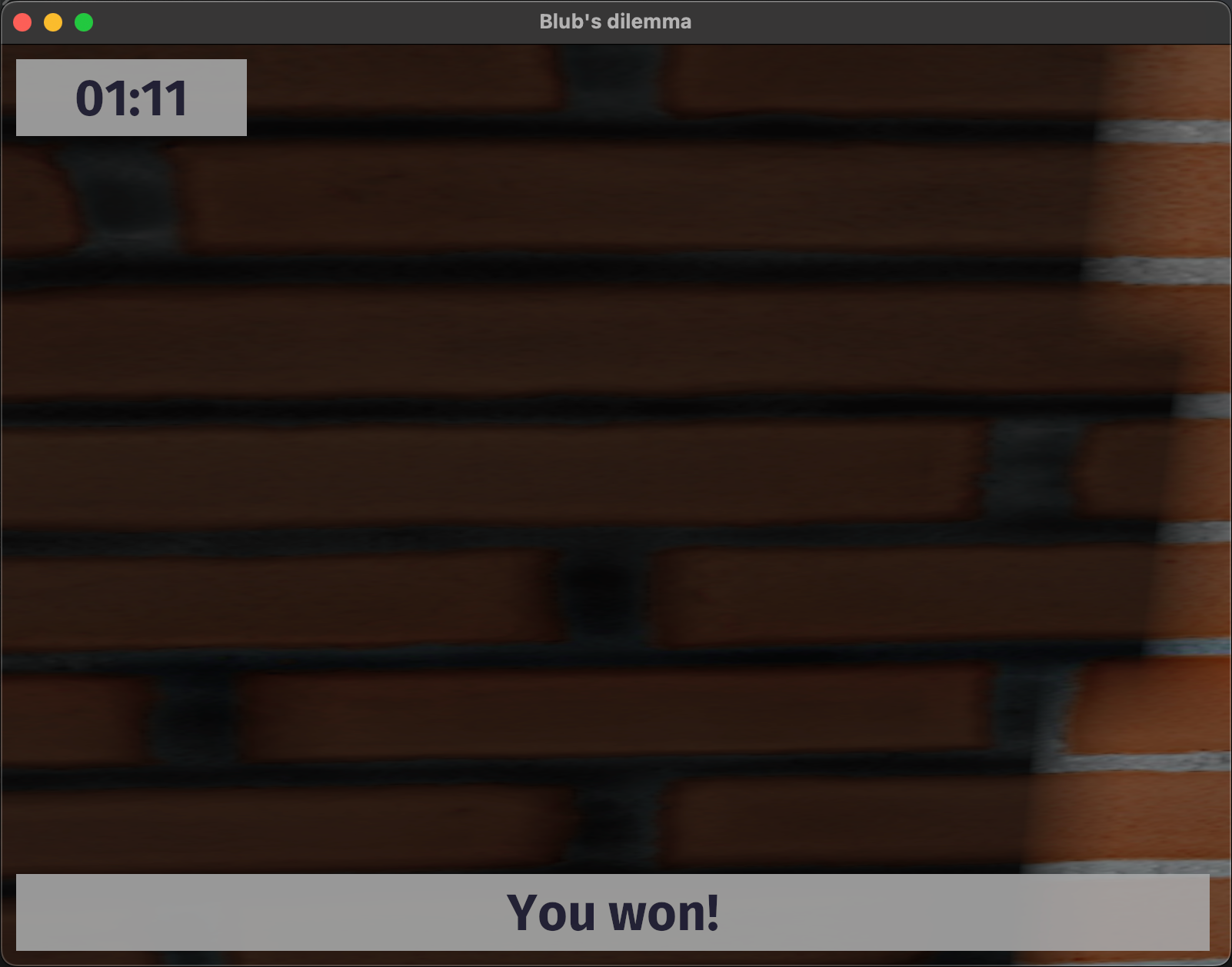 Your submission is restricted :(