Hi! Just wondering what the rules of publishing trophy incursions elsewhere are. EG: are we allowed to publish these on drive thru rpg?

I think this would be a mega useful feature and would encourage collaborative work on this platform, which will encourage higher-quality work. I read a blog post recently on the topic... The main takeaway is that if 5 people want to make stuff, the 1 thing they make collaboratively will be better than the 5 things they make separately.

Rev share will really help make that happen for itch, and I believe change the culture on this platform massively for the better.

I'm working on a hack of lasers & feelings/trollbabes - hopefully it ends up as a fun, super light set of rules for playing osr games. I'm gonna include some tables for creating your own *dreamy adventures, but the rules should work for existing modules too.

Hey gang! I've just posted my submission for the Pamphlet Jam, a nice straight-forward dungeon crawl with goblins and hobgoblins. It should be compatible with most OSR systems - personally I usually use Knave, but I'd love to hear if you've played it in something else! The premise is that you've been captured by a hobgoblin who's discovered a demon-summoning temple and wants to turn it to his own purposes - once you've escaped your bonds, you can either slip out the front door and get the heck out of there, or try to take down all the baddies and track down some loot.

1 sentence project description: A dungeon full of classic monsters, with a hobgoblin who wishes he was a wizard and wants to summon a demon.

link to project: you can find it here

(btw there's a typo in the filename when downloading, it says picutre instead of picture)

OK the bug has now been fixed. Thank you so much for discovering it!

HMMM ok this sounds like a glitch (oops). I'll fix it up & update the file very soon. thank you so much for playing!! <3

Thank you so much, I'm glad you liked it! I hope you play the full game when it comes out too, it'll be quite a bit longer :)

Whoa, what a cool take on minesweeper! I love the art style, & the gameplay is really fun

Thanks! Good luck with yours too, I'm keen to play it :)

Reply
NaNoRenO 2018 community · Posted in What are you making?
Megan4 years ago

I googled the story you mentioned - I found a short story about a mermaid girl? It was very beautiful, I look forward to your adaption if it.

I'm actually doing a mermaid game too! Mine's focused on a girl spending a holiday on a small island who meets a mermaid - you spend the game learning to fish & befriending the mermaid. I'll start making real posts for it when I have real content for it, haha.

Wow, thank you so much for this comment! I'm super glad that this blog was able to help you work out stuff for your game :)

Hey, thank you so much for your detailed feedback, I really appreciate it! & I'm glad you liked it :)

Wow! Thank you so much for LPing this!! I'm really glad you liked it

Um...I'm speechless. I don't know what to say. Wow! I loved every minute of it.

Gotta ask - how did you do the reflection in the mirror? It's fantastic.

Haha, I hope that's a good thing! Thanks for playing :)

no worries! hit me up if you want a hand with them

Thank you :) I spent forever looking for music for it, so I'm really glad it worked for you!

I love the vibe of this game....really satisfying, yet melancholy. Also I love the coat hanger tiles behind the clothing items, it's a  great detail.

Who wouldn't be? Haha :) Thank you for playing!

Thank you! I'm very new at pixel art, so I'm super glad it worked for you

Well! to start with, the "items" being traded were just variables. the merchants' dialogue was set up as a conditional dialogue, so depending on the count of certain variables they'd say different things. then, when they were supposed to give you an item, I used {VariableName = 1} to set VariableName to 1 - ie: to "give" you VariableName. This variable was then used in a different merchant's dialogue, and so on.

Thank you so much !

Thank you so much for LPing my game! I'm so glad you liked it :)

I'm all but finished! This week I've achieved: 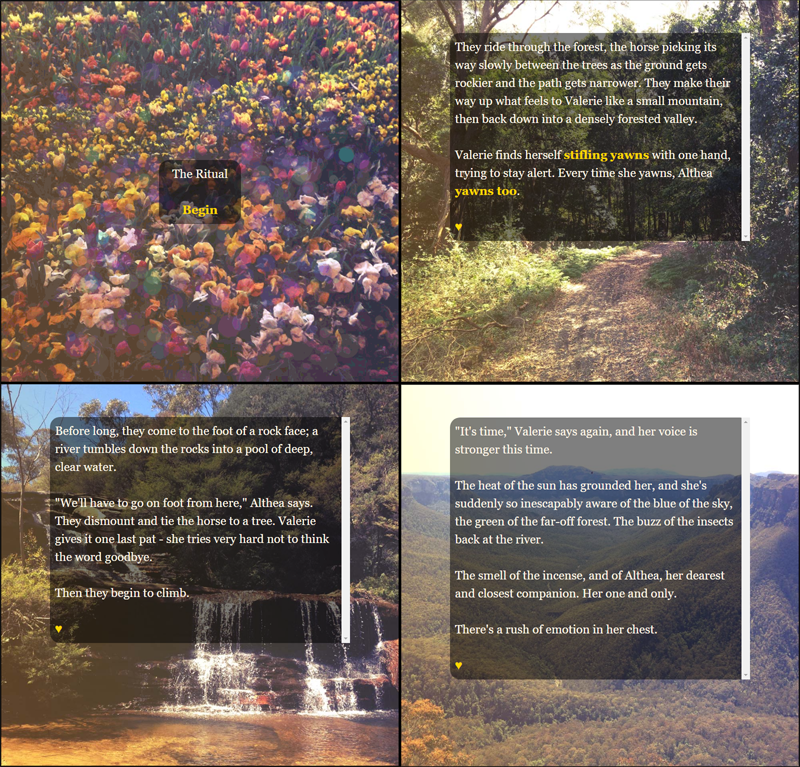 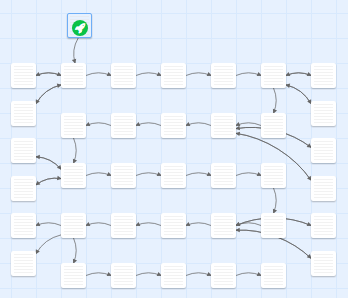 I've got 4.8k words written, background images for most of the scenes, and background music!

I still have a lot of polishing & editing to do before I can post it, but I'm super excited to be this close to done :) Hopefully by this time next week my progress log will include a link to the actual game.

Gosh, you guys! In the last fortnight I have been not at all productive. I'm starting to wonder if I'll even get this done in time! I've been trying to work on it, and I've made someeee progress, but nowhere near as much as I wanted. Bummer.

So: what have I done? I've made some decisions - I've removed the feature I was talking about in the last update. It worked and everything, but it didn't feel "right" for this game. Instead, there are some conversations where you get to pick the topic. You also have the option to check out one or other of the girls' thoughts during the journey. I'm not 100% sure if these choices will change the ending (still have to write the ending....), but player choice is back in the game for reals, and to stay! You can kinda see this in the latest twine garden:

I've also decided to have a lil bit of art in the game. I often go on bushwalks with my partner, and I've started taking photos while I'm out and about, as the landscape around me is so beautiful, and will hopefully really add some really nice ambiance to the game.  The photos I've taken are all still just placeholders (I'm hoping to get my partner to take the final pics...he's super good at photography!), but I've started playing around with adding them into twine and adding some fun CSS. Check it out! 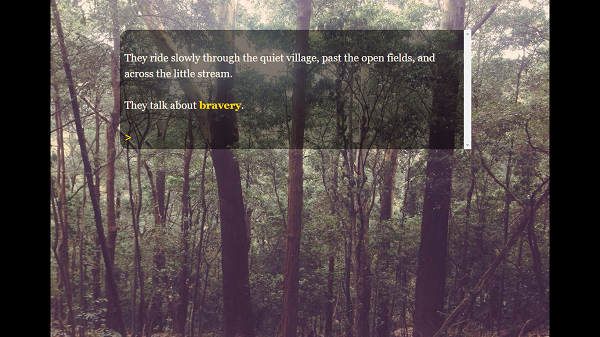 As for wordcount...don't even ask! 2.9k, but I have quite a few conversations and thoughts still to write - not to mention the ending.

Hey gang! This week I was mostly offline on account of  being on holiday w my boyfriend, but I took my notebook & wrote the whole next scene :)

So now my word count is 2.4k, which is pretty exciting! I think I'm almost done with the draft of the main story - just gotta write the ending now.

I've also decided to put in an "alternate route" for the story to go - basically the first time you play it, the story will go one way (Route A). The second time you play it, the story will go another way (Route B). The way I've been able to do this is through browser cookies - "saving" your game in Twine creates a cookie in the player's browser. "Loading" your game is just reading that cookie. So when the player is at the fork in the routes, I just have to check if a specific "save file" exists. If it does, I send the player down Route B - if it doesn't, they go down Route A. At the very end of Route A, I create the specific "save file" - this way, the next time they play it, they'll see Route B.

First you check if the save file exists:

And then you create the save file at the end of Route A:

The main difficulty I see with this is getting the player to play the whole game twice. I'm honestly not 100% sold on it, & it may not end up in the final game, but I thought I'd share with you guys how to do this kind of thing!

the characters are so cute (e-even the ghoul somehow)! definitely keen to play this, it's such a unique idea

super interesting, thank you! I'll definitely play around with this. I've never thought about making the whole page clickable

okay...I was supposed to have done heaps of work on this game this week, but...not so much. I spent a lot of time playing with Twine, trying to polish up some old games to publish them (check out my itch.io profile to play them!), which was great on one hand, because I did learn a lot, but on the other hand...didn't get a lot done on The Ritual.

I did decide that instead of a "choice" based text game, The Ritual will be a linear game. While writing the game, the choices I was adding felt very "tacked-on" - they weren't meaningful for the player, and they didn't change the game state in an interesting way. The choices were all boiling down to (A: good choice. B: less good choice). Instead of player-driven choices, I'll be making it so the story is different the second time you play through - two endings, but they're both linear. (if that makes sense...)

So since that choice, I've written about half the words for the game. The wordcount is sitting at around 1.4k at the moment, & I'm expecting it to be around 3k at the end. I've also noodled around with some CSS with Leethe (see above...), so I'm feeling very positive about the whole thing! I'm hoping to work on some art for the game, or some music, and really amp the "mood" and immersiveness of the game (at least, as much as you can with a text game).

Anyways....since the game structure has changed so much, I thought I'd include the latest twine garden: 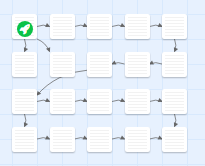 As you can see, it's a super short game! I'm just going to try to get it Finished and Polished and Published before the jam deadline & not worry too much about the length. Maybe once it's over I'll write a sequel or a prequel?

You're a legend! I had some of this stuff in my CSS, but not just .visited by itself, I was using tw-link.visited. I think your way is neater :)

andddd just to document the stuff we've been talking about in Discord, if you want to style the "quicklink" hooks and the regular passage links, you'll want to open up the custom CSS page and pop this in:

Not a ton of work done on this this week; hoping to get more done soon.

Since I tend to write really long passages in Twine, I've come up with a "cursor" that will display the next "chunk" of the passage without getting rid of the rest of it. Example below: 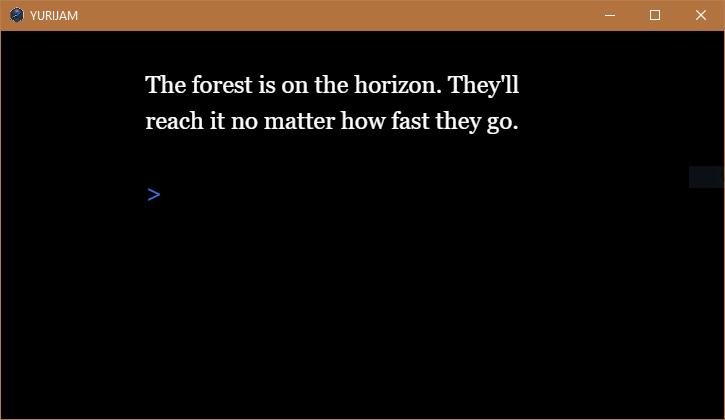 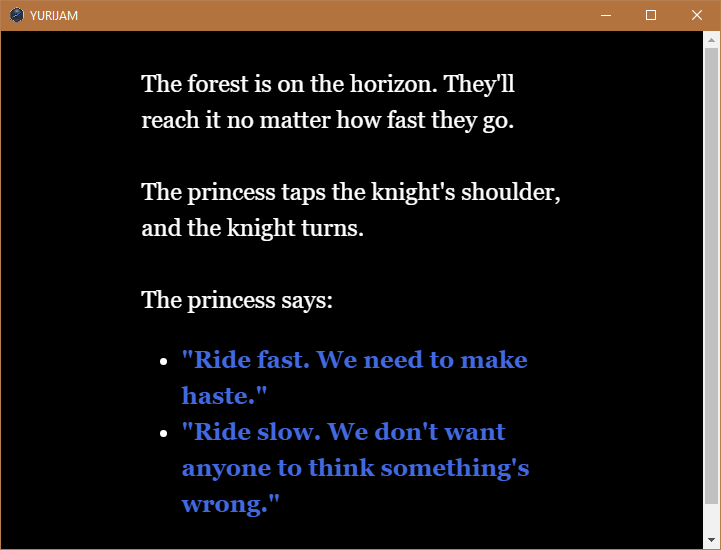 And in case you're wondering how to use a cursor like this in your own game, it's like this:

Note: if you use "link-reveal" instead of just "link", the cursor will stay there instead of vanishing. In this way, you can use any snippet of text as a fake link to another passage.