Can a x86 build of the windows version be compiled? Or is that too much of a hassle? I really like Ogmo but I work primarily on a Win32 machine. Thanks!

You could take the template approach as suggested from Tuskat (which I reccomend), or you could make 3D models and render them as sprites. The benefit to this would be that you only have to make an animation once, and then you can have a script render said animation in all 4 directions. Of course, 3D modelling and animation are a whole other beast in it of itself, but if you know anyone who knows basic 3D modelling and animation, and you make really basic models, it could work out.

I can vouch for Gamemaker, but Fusion and Construct are really great for begginers too. There's also GDevelop which doesn't require any code, but I haven't used it personally.

Hi! My name's Makhor and I've been making some game jam games for quite some time now. I'm listening to some of your stuff on soundcloud and I think it would really fit quite the mood for the game I'm thinking of for this jam. You can check my personal itch page for the projects I've worked on, as well as some other games from this page. Please let me know if you're interested!

Does this mean I can use an editor that isn't Sublime Text as well? Like VS Code?

This game is so creative! I especially love the little screens that light up when you step on them, it's a really good way to demonstrate the main mechanic of the game, and it looks really cool! I would totally play a full version of this game!

This game has a very heavy theme, but I think it balances out the heavyness with a lil' bit of banter and sillyness. Really good looking for a bitsy game too.

This is a really nice game!!! Very chill and the atmosphere is supreme!

Hey, if there are any 2D artist out there wanna join a team, please email me at: sanchezjorge165@gmail.com

The game our team is working on has a pretty minimalistic aesthetic, with a lot of primitive shapes (kinda like LIMBO, in a way). If that sounds interesting to you then you know what to do!

This game is one of my roughest game jam entries to this point. There was some coordination problems and thus art assets were completely left out, debug functions can still be seen, etc. But it's one of my favorite games I've made gameplay wise! I would probably shelf something like this nowadays but I still think it's an okay game!

Hey there! First of all, thanks for playing the game! Second of all, I agree with a lot of these points. You can actually replay tutorial messages by pressing F on the red buttons, if you get near them it'll say "Press 'F' to replay dialog". But up to these point, no one has actually used it, which means that it obviously wasn't clear enough what they do, so yeah that was a big mistake on my part. More HM style weapons were planned such as melee weapons, but they didn't make the cut, thus making the game seem more GTA than HM, but I think the HM style comes through with a lot of our effects/aesthetics. The weapon speed was actually slower on the original versions, but got upped before final release, and so far, it clearly wasn't fast enough. A hit indicator was also planned but again, time constraints, which obviously mean that the game was just too ambitious for it's own good, and that it should've had a smaller scope. Also, you can pretty much win the game by shooting everyone, and I know I said on a previous post that you're supposed to shoot the red/green NPCs, who are supposed to be gang members, but eventually the game just became a "shoot anyone that moves" game, and it should've been explained as such on the tutorial. Some really good criticism/feedback overall, and again, thanks for playing the game! We will defenetily keep this feedback in mind for our future projects or... maybe a more refined version of this game, who knows. ;)

This game had a lot of problems but the main one is defenetily the "Whys". Why are you shooting people? Who are you supposed to shoot? What does the skateboard do? it was really stuff that needed to be addressed but that kinda fell back compared to making the main mechanics, which is very wrong. The tutorial was supposed to address a lot of stuff but it just simply wasn't enough, there was way too much stuff. The way tutorial text works wasn't the best either, you can actually dodge by pressing space bar on foot, but I changed a line of dialog which included the explanation, and the skateboard spin is actually a dodge, but it is very hard to notice. And while you can always playback conversations on the tutorial by pressing some red buttons, that also wasn't very clear. Overall, WAY too much shit for it's own good, scope should've been smaller and I agree with all your points. And there was also supposed to be another weapon variation called the "Super Shotgun" that didn't make the final cut, which was supposed to be a more powerful shotgun with less ammo, in order to make enemies more dangerous and give the player more power. And the difficulty was a mistake of pretty much 0  external playtesting, the game kinda got stuck on this box and thus, figuring out difficulty was pretty much impossible, which was another major mistake on my part. Thanks for playing the game, though! We appreciate the feedback and will definitely keep it in mind for our future projects!

This game is really nice. it's a pretty nice combination of Mega Man, Cave Story and Yoshi's Island. I did encounter a bug where if you jumped before entering another area, you could get stuck in a wall, but it didn't matter because I got back to that point really quick. Also, the ending was very confusing, as someone who hasn't played GITS 1. Also, very nice pixel art and music, overall solid entry!

Great presentation, nice voice acting, nice character art, interesting ways to spice up pong. Only problem I would say, which is more personal, is that pong is really slow so I get pretty impatient but I would say that this is a really fun game!

Ok, I only finished the first puzzle, mainly because I wanna play other entries, but this is pretty great! I like the whole picross with colors idea and the art looks pretty good! The puzzles are also really neat too and easy to understand. Overall, really good game that I will come back to later!

First of all, thanks for playing the game! Second of all, I agree with a lot of the stuff you pointed out. I think just saying "shoot the green and red guys" would've been a lot more clear and better, it was one of those things that slipped out of the other stuff that we had to do, but the game can pretty much be played by shooting at everything, because even normal peds can be aggresive! I would say that the pistol and shotgun sounds are impactful on slow mo but you can barely hear them, bad sound balance on my part. And the more I heard the SMG sound, the more I hated it, but there was no time to change it. Overall, really good feedback you just gave us! We'll be sure to keep your points in mind for our future projects! And again, thanks for playing it, and cheers!

The game DOES NOT judge your art! Just make something that you like! The art minigame is supposed to give you a relaxing down time after playing the other arcade like minigames. Hope you like it after fully playing it.

Let's say that I started a prototype like 1 week ago and I made some basic movement and camera stuff... Could I enter the jam and use the prototype I have so far? What are the rules on pre-jam content?

Thanks! That means a lot to me. Glad you enjoyed it!

I left you an email, hoping we can work together. Cheers!

Congratulations for your first game! That was Also the case with my first finished game. There wasn't a whole Lot of stuff to do to keep the player engaged. But, it gave me motivation to keep going and improve my games. Again, I really liked the color palette and the simplistic graphics and the fact that it's a text adventure game, so keep working and you'll eventually hace a really nice adventure game!

This game was ok. I liked the blue palette, it's very pleasing to the eye. And I also like how it's pretty much a text adventure game. But the thing about text adventures was that there was a lot of choice. "Can I pick that up? Can I use this item on that thing? Can I give this item to that guy?", that sort of stuff. This game is pretty much the bare bones of that. The game could really benefit of a lot more choices and paths before the final boss. Some music and an animated background (maybe a snow falling background like a screensaver?) to fill the grey parts to the left and right of the screen wouldn't hurt either.

So, me and my group were planning to enter the jam with a prototype we made for another game jam we couldn't finish, but then that whole idea did a full 360 in the first day of this jam and now we are making a point and click adventure game in the style of Monkey Island or Maniac Mansion, in Game Maker. going by the working title of "Westwood Casino". There's only one (temp) background, every character is just a white block at the moment, but i did manage to make a pretty nice dialogue system with choices and sweet black outline commodore text! I am starting to work on the Puzzle Dependency Chart as well (Don't worry, no dead ends or deaths). Next step is adding verbs and the inventory! 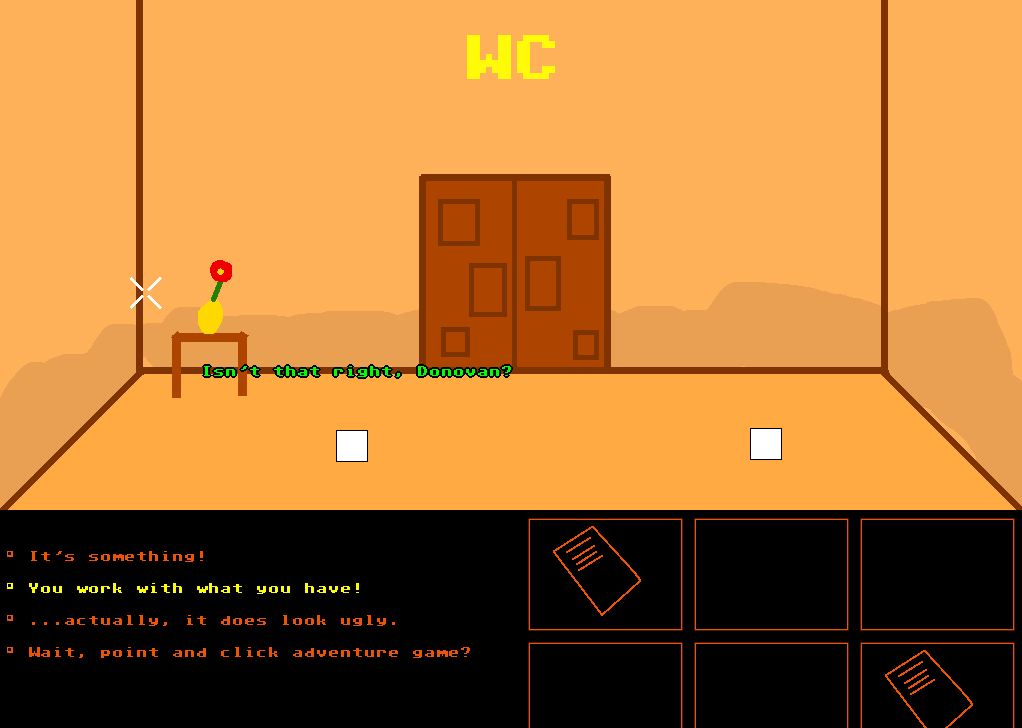 Thanks for the feedback! The music was made by Osmium (link to his Soundcloud in the game's description), and the two tracks i decided to use for the game were two WIP tracks, which i thought would fit the game, but of course they are still unfinished tracks. I suggest you check his Soundcloud for his more finished tracks.

Thanks for playing my game! Really good video too!

I do like me some ASCII roguelikes, and the intro text really set it up to be this creepy horror roguelike, but i didn't see any monsters, and i won instantly because my objective was the room next to the room i spawned in, i think more floors or a restart button could really help this game a lot.

This is really good! it's a lot like warioware and the minigames are very interesting and they go with the jam really well! if there's one criticism i could give it, it would be that i didn't understand "Skidmarks" at first, i thought i was supposed to mash the space bar, but i eventually got the hang of it. My highscore on endurance is 16 games beaten, 3 lives, start speed of 2.

Unfortunely i can't make a web build or a Linux build because the game was made with game maker and to make Linux builds you need to pay for a module, which i don't have. I'm okay with the game not being featured in All Things Open.