The game looks nice.  Unfortunately, I didn't play it in time to rate it for the jam.  Only issue I had was pressing Spacebar made my browser scroll down, so I had to plug in a controller to play.

This is a re-post of my comment on your LD entry page:

Very cool plant simulation!  At first I had the slider bar to the far right to speed things up and it didn't seem to be any faster.  Then I put it on the far left and it started growing like kudzu. 😀

I like how if you don't feed/water your plant it starts to die.... then if you water/feed it again then it starts growing again.  It also seems like the branches grow in a different direction each time.  I would be interested in hearing about what algorithm you used to determine the branch angles.

I remember making Java games years ago when I was in college.  Back then we were using JDK 1.1.7b.  Seems like Java has come a long way over the years.

Nice.  I know dropping block games are more complex to develop then they look.  I created a Tetris/SimCity hybrid years ago.

Very cool!  My best score was 40 points.  Hope the Pico-8 discussion earlier this month was useful. 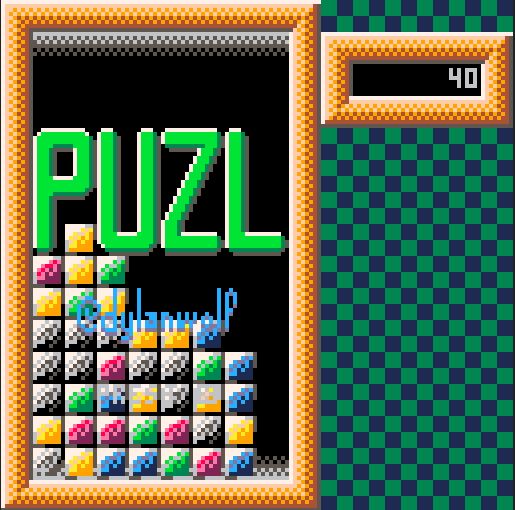 I got back around to playing this game again, and I was able to light the tower with the lantern.  I made it to the straw hut in the forest.  Great art style and I liked how you handled the camera in Castlevania (3?) style at the split in the path.

I made a butler.bat file that just calls:

Which is used by the upload script for my games, which call it like:

However, in the new version of the Itch app (25), the location of butler was changed, so now I have:

The problem is that my butler.bat will need to be updated each time a new version of butler is released, since the version number is a part of the directory structure now.  Unfortunately, since I'm on Windows I can't just create a symbolic link.  However, it's better than having to compile butler from source myself.  There is a ".chosen-version" file, which probably could be used with some scripting magic to find the correct butler folder to use.  I'm already writing a graphical Unity build tool in Ruby (https://bitbucket.org/gatechgrad/unityhelper/src/default/UnityVersionDisplay/), so it probably wouldn't be too difficult to just go ahead and include an Itch/butler upload function as well, and just be done with the bat files.

Nice!  Thanks for playing!  I'm really not big on VR, but if enough people want it...

I remember when you showed this off at one of the Knoxville Game Design events, but I don't remember if you had ever posted it anywhere before now.  I got to the top of the tower and didn't have a flame to light the lantern. :-(

Wow, you added a lot more levels to Retrofuture since I last played it!

Really cool how it remembers which levels I've completed, even when I close the browser (except private browsing).  Is the player's progress being stored in a cookie?

The Itch app makes finding, downloading, and installing compatible Ludum Dare games so much easier.  I just wish it displayed the Ludum Dare "View Submission" link like on the web interface.  I can copy the game URL, paste it in another browser, then click the entry link.   Although, if it also displayed in the Itch app it would save me that extra step when rating Ludum Dare games.  Thanks!

I have a game with two different Windows builds.  One build is the original XNA .exe build for Windows 7 and the other build is a port to a MonoGame UWP .appx package.  Both are Windows, but different depending on the version of Windows the player is running.  There really isn't any way to differentiate the two aside from the file name, so it would be nice if I could put a note on each file, such as "Windows 7 executable" or "Windows 10 installer".

Just a suggestion.  As a workaround, I have put an explanation of each build in the install instructions and description.

Thanks for playing!  There is a recharge meter in the upper left corner below your score.

Thanks!  I also found where it is installed with the Itch app.

I used it tonight to push a Windows build of one of my games, and it seemed to work great.  I'm happy that I don't have to make ZIP files to upload anymore. :D

I noticed the note about trying Butler next to the upload button for my game. I clicked the link to give it a try, but it just took me to a GitHub repository. I looked around and couldn't find any builds.

Do I have to compile Butler myself? I know very little about Go and I really didn't want to have to learn how to compile it myself. Does it just run through an interpreter like Ruby or Python? The README and doc links just seem to send me in an infinite loop.

I've already implemented a few of those things tonight. Thanks for playing!

Thanks for checking out my game. :D

A new Windows build has been uploaded. You can now add presents (8 snowflakes) and snowmen (12 snowflakes) around your tree! Mac build coming soon.