I will definitely look into this.  I apologize for the inconvenience.  I definitely want the game to run on Linux, I want to port it (in a less buggy state) to the Raspberry Pi... eventually.  So it definitely needs to run on Linux.  Thank you for the feedback.

So, initially, there's only one monster on the board, being that there are only 2 tiles and one has the rogue on it, stacking a bunch of monsters on there didn't seem fair.  At the beginning of the monsters' turn each round the "Game Master" roles 1d6, on a roll of 1 the GM will add a wandering monster to the board.  I've had runs through a level where none were ever added, and I've had runs where every round a new monster got added.  It can get really hard really quick.  There are 5 different monsters, each with different stats, in the game.  A good trick is to build the dungeon in a way that the monsters will move away from the stairs and you can avoid them completely.

That's very interesting about the text on WINE.  Did it show up in the menus?

Very possible, there are bunch of "fun" bugs in this thing.  Though, if that's the worst bug you found, you're doing really good.  We can chalk this up to you finding some foreign gold with a really horrible exchange rate, so it basically equates to 0.

Yeah, the tiles not matching is totally a feature... I mean bug.  It has to do with the game not realizing there's already a tile on that spot and stacks a second one on top of it.  When you click the tile you have a pretty good chance of getting the one on the bottom.  Just chalk it up to the Game Master being a jerk.

I like the way the game isn't over after you die.  I seem to remember another roguelike doing that back in the day... is this a lizardlike?

I just found out about this community page!  I uploaded a little fun project about a month ago, it's a remake of the classic Atari 2600 game Adventure, inspired by the recent remake of Link's Awakening.  I had a week off of work and figured I'd just throw something together and have some fun making a game. 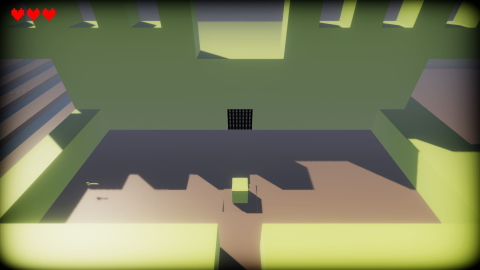 Sometimes there are goodies hidden in the dark little gaps... just saying.....

I really enjoyed your game.  Your ghosts are way less forgiving than mine.

I just found out (realized...was told....) that you don't have to hit the main page to get the game.  So the controls listed there aren't any help.

So, from the game's main page:

Use the arrow keys or wasd (really only the left and right arrows and the a and d keys) to move.

Use space to jump.

Or use a joystick.

Wall jumping is possible, and necessary!

You can practice your moves on the menu screen.

Ah yes, I put on the game's main page that there is wall jumping and it is necessary.  Sorry.  I didn't realize that the Jam would  have a cover page.    I should post a comment about that here.

I was very forgiving with all the hit boxes, you've been playing too much Levelhead or something if you think my hit boxes are too forgiving!  ;)

I like the idea of it being on the story book.  You should take this general idea and polish it up into a full game.

The controls are too hard...too many buttons to remember... and all those crazy combos to do the attacks.... (j/k of course).  I love the minimalist design.  I always shoot for small and go way overboard during jams.  This is awesome!

The UI sizing in Unity is always painful.  I died and the game just kept going.  I couldn't tell if there was something in the instructions to explain that or not, but I had to kill the game to get out of it.

I love the look and feel of this, it has a Psychonauts vibe to it.  But it crashed on me and I couldn't quite get any of the items to work.

I had a good time with this one... took me a couple seasons to figure out what was going on.  That overly dramatic music is AMAZING!

ahem....a purple meteorite that is similar to but legally distinct from any of Namco's IPs.  Thanks though.

Awesome little dev tool, especially for jams that theme themselves around classic or fantasy consoles.  This is the most flexible and dynamic 8bit console simulator that I've ever had the joy of messing with.

I can't say I knew exactly what was going on, or what I was doing, but I kept doing it anyway.  There's something soothing and cerebral about this that warrants more play.

Well, the game is mostly shit, so if you play the shit out of it, there may not be too much left.  :p

But thanks for the kind words, and I hope you enjoy it.  I'm having a blast playing all the other games.  I'm really bad at them, but I'm also really stubborn.

OMG, I really apologize to everyone that has downloaded the game so far... I've re-uploaded the file, now as a zip.  Just unzip the files and run.

The issue with testing on the dev box is it always works where you built it.

Ok, Ok... now there's another update, this time with all the data.

The file has been replaced with a zip that now contains the resources needed to actually play the game....

Sorry about the confusion.  If there's any more issues, please let me know here.

So, I've gone back and uploaded a new version of the game with Music and a slightly better end credits scene!

Check out the amazing music that a friend of mine sent me.  Great stuff!!!

There's been an update to the game!  Now with Music!!!

Crazy neat.  I'd say it's a bit more of a piece of art than a game, unless I just totally missed the point of it.  But it's great fun to look at.

Hey guys, thanks for hosting another Jamuary.  That was almost as painful and frustrating as last year.  I've started playing some of these here games... got some really interesting things going on, can't wait to see them all....

Throw up some "Halfway there" pics, people.  I wanna see the games that are going to consume my February... at least the first few days of it.

I'll start some off with a with an early shot and a midway point shot.... 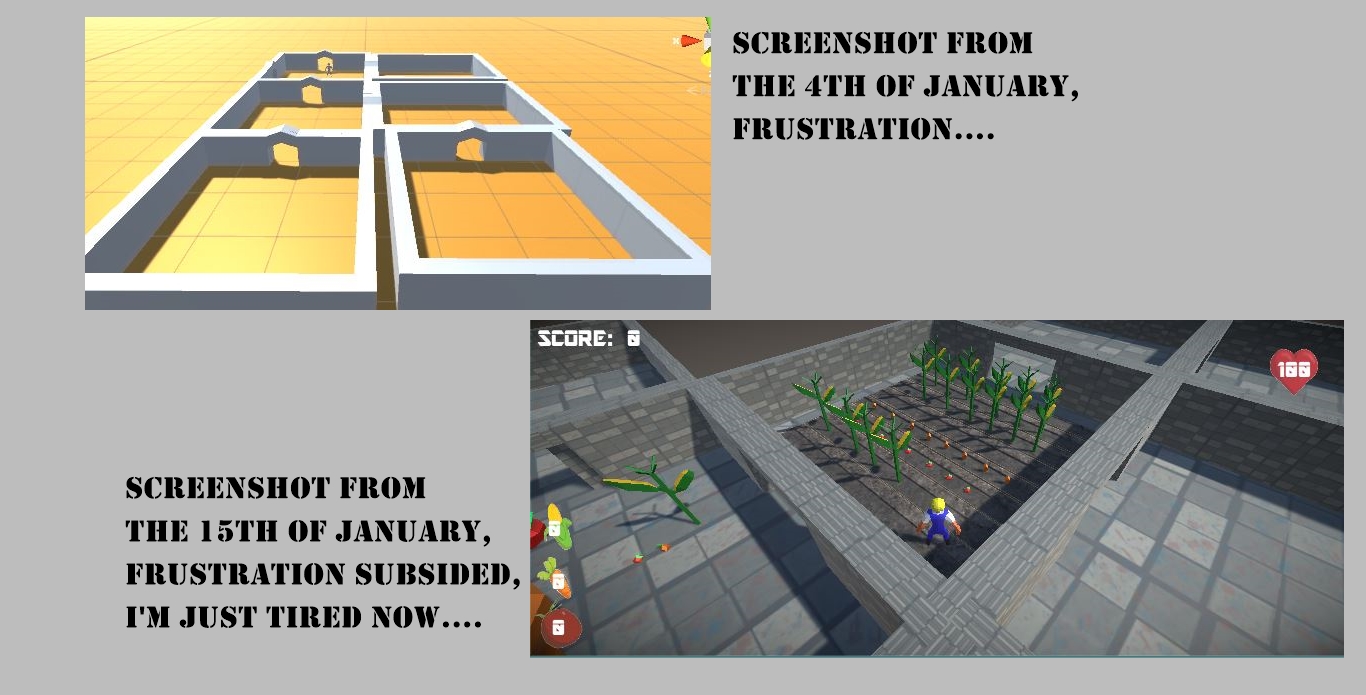 At the halfway point!

I appreciate that... but I think I've got it, this time around.  What are you modeling in?  I have found that Blender can oftentimes be the bane of my existence.

sweet, with all the options for themes, if you had a chapter on each it would be a hefty read.

I finally got the punching in there.... so now you can walk around my maze and punch things.  Woohoo.

So far it's a maze walking simulator.... but gameplay is coming....

I think I have an idea...I'm hoping to have something playable by the end of this weekend.

The Discord channel overwhelms me, I always feel the need to catch up and that thing is constantly scrolling.  I'll definitely get on there and check things out periodically though.

Have you seen this other "Game JAMuary"?  You need to give them the smack down... though I think they may out number us slightly.

Hey everybody!!!!  What's anyone working on?  I think I'm a bit overwhelmed by the options.  But I'm definitely aiming for something simple with a kinda retro style game play but with a shiny new coat of paint.

This is a really cool puzzle game idea.  I'm not much of a puzzle game guy, so this bite sized chunk was the perfect size...for me.  Although you introduced a new mechanic at the very end that I wanted to see how you used in future levels.  I could see this being a really good, full featured game.

HAH!  Great feedback.  I went back and forth on how long to make the level before the boss comes out.  Yes, there is a special ability that only appears during a 2 player game, but you have to make it to the boss in order to use it.  Will I get disqualified for shortening the countdown for the purposes of this JAM?  Instead of 9000 km I can put the boss at 3600 km so you guys can see the boss and the cool "Union" mechanic after 2 minutes instead of 5... but  you have to kill a lot of enemies in order to use the Union, that's energy at the bottom of the screen, not a score.

Ok, well... it looks like I broke a bunch of things the last time I "fixed" it.  Now the aspect ration should work and the game should be the way it should be.  Hopefully I didn't break a whole bunch more stuff...

as hard and as addicting as that original flapping fowl game

Great basic game... could use a little more procedural placement of the ducks instead of complete random placement....but very functional

Amazing twist at the end....