We are participating in a game jam where rating entries is set to the random mode, where you are given a queue of 5 games to rank before being given more. This is a nice system, and the capability to shuffle games and set the desired platform is great (although it would be even better if you could select multiple platforms)

The problem is when a game can't be rated, but is not really "broken". In our case, a game in the queue uses the Godot runner and refuses to launch on a fairly new laptop with discrete graphics. This isn't really the dev's fault, and there are commenters that have had luck starting the game. Reporting the game as "broken" would be inaccurate, but more notably appears to send a report to Itch moderators, which is hugely overkill.

There are also a few games with other significant barriers to entry (requiring an emulator, being exported as an installer instead of a single executable, apparently triggering an AV false-positive). Users may feel unwilling to deal with these issues and may not want to rate those games,  but that doesn't really merit reporting the entire page to Itch. In most cases this will probably just lead to people rating the game 1-star and moving to the next game instead of filling out a big scary report form with their email address.

It seems much fairer for devs if jam rating-related reports were a little lower stakes, going directly to the jam owner with an optional checkbox to send a copy to Itch moderators in the event a game is actually completely broken, spam/malware, etc. If there is a concern users might abuse this functionality, a jam owner could approve or deny based on the information in the report, there could be a cap, etc.

It's technically possible but we don't have the hardware or the kind of experience we already had with the x86 Linux build process right now to say one way or the other. If we pick up a Raspberry Pi at some point we'll certainly give it a try.

No multiplayer is planned for this release because of the codebase not being built around it, but Eudora 2 is being built with multiplayer in mind so we'll see! We're glad you could get it working, thanks for posting that information.

It looks like everything works properly as-is on the Linux target, so one is available now!

I'm always really pleased with Itch's visual design, especially dark mode - it's nice to be able to bring up pages in a dark room and not be blasted in the face with a blaring white background and garish colors (unless someone's themed their game page like that).

But the theming on analytics is really difficult to read once you have more than one game. There's not much of a distinction between the colors assigned to each game, they can appear to blend together when the bars are ordered light to dark, and it seems like the colors assigned to each game change depending on what's currently active in the panel. I can't really tell at a glance which game is doing well without clicking (or hovering, which I can't do on mobile) - I just know it's the sort of purplish one that's darker than the brighter magenta one.

It'd be nice if we could just assign hex codes to each game when viewed in the dashboard, so we could use our own palettes.

You can use WASD  for scrolling, though arrow keys probably would have been more intuitive in this case!

We recently published a game pagethat doesn't have any screenshots (yet). In this case, the possible options are to add a sidebar, which automatically shows the cover image and looks a bit strange otherwise as a giant blank column, or to hide the sidebar, resulting in a layout that makes text verrrrrrry wiiiiiide and difficult to read on a widescreen display. Adjusting the text to compensate by adding extra line breaks, etc, means it no longer flows well on mobile devices. We went with the latter to avoid the cover image showing up in the sidebar, but it's not great.

I think it would be nice in these cases to have at least one of the following two options in the theme editor:

Have you ever looked at the moon or other space objects and said, "I hope I can destroy these with nuclear missiles someday"? If so, that's kind of weird and you should respect the beauty of the cosmos. However, your dreams might just be a reality. Not just as tonight is a full moon (making it easier to aim), but because of the release of BOMBARDMENT:hd|FW: CEASELESS ASSAULT OF ROCKS! 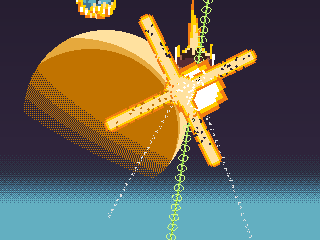 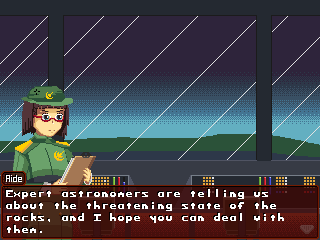 A horrific number of asteroids and assorted ice balls have descended on Earth and really messed the place up. Thankfully, "DOME CITY" was constructed years ago, and you're entrusted with its defense for whatever reason. With your help, we can make asteroids extinct forever and avoid being crushed to death by using various monstrous weapons like flak cannons and beam towers or very cute weapons like the beeping "seeker mine" to defeat them.

If you like "Missile Command",  or even "clicking", you might enjoy this arcade-style vertical scroller with game jam origins, remastered for the anniversary of some fictional space rock related events on Sep. 13th in Space 1999 and Neon Genesis Evangelion. I don't know what genre this game is even in, but it's fun, and you don't have to pay for it, and that's probably all that matters. If people like it, perhaps it could get a full sequel with more weapons, more levels, and one of those demo modes that you'd see on arcade games that flash "INSERT COIN" and if you don't have any quarters you just sit there and pretend you're playing even though everyone knows you're not.  Anything is possible, so feel free to download it.

Does the "release status" field for a game have any sort of impact on visibility (search/etc), or is it only for tagging/informational purposes?

We're in kind of a weird liminal state between "released" and "in development" for a game so I'd like to make sure there's no problem switching to the latter if we decide to do major work on the game similar to an Early Access model. I seem to remember something about this when doing research about how search visibility works, but I think I'm maybe mixing this up with the "it won't show up in search unless there's at least one download" thing since it looks like "In Development" is also intended for Early Access. Any info would be appreciated!

If you're familiar with games like The Incredible Machine or Contraption Maker, please give it a try! If you're not, please also give it a try! We've tried to make the game easy to pick up but a challenge to master (I know everybody says that, but if you're making a good puzzle game, it's kind of necessary). See more and find the download at our Itch.io page.