Ah, you died of thirst! I should probably make it more clear you can jump out of there, since it doesn't make a lot of sense for the train car to just be missing a wall. Thanks for the input

Nice job, this game has a lot of fun surprises. May that miner rest in peace.

Nice game, Easy to learn, I was expecting to be frustrated but I had fun trying to build up the right amount of momentum. Looks pleasant too, the only thing I could think of is maybe there could be a circle texture for the particle effects so they blend in with everything else.

Fun game, nicely polished and the computer puts up a fight! I would always try to grab one of my dice before it lands and move it around. Probably doesn't do anything for you but it is entertaining.

Glad you enjoyed it. Do you remember what it looked like when things messed up? That train has required a lot of bug fixing in the past.

Nicely done, I love the drawings and had fun playing around with all the units.

Thanks! I just think it's cool someone got a few hours of entertainment out of it lol

Nicely done! Strong atmosphere and sound, pretty environment, and I learned about something new.

Nice work, the slippery feel made it enjoyable to steer and I found it really funny how the cat just plows people over.

The rating period is over! Congratulations to everyone who participated in the Jam, you people came up with some truly entertaining stuff.

Presenting the winners, as voted by you:

What I said above. It's a lot of fun.

The mechanical sounds behind the funky synth music line up quite perfectly with every robot being assembled, which is a pretty awesome use of music to think about as you oversee production.

Appearance - Chicken Catcher Simulator 3000 by cpiod
Seeing a pattern here? The chickens come in all kinds of different colors, the pixel art is consistent and pretty and the whole thing looks very appealing.

Functionality - Needle in a Haystack Simulator by Bungus Productions

Hey, that's me! I guess I can count myself lucky you folks didn't find all the bugs I left in there.

Creativity - Needle in a Haystack Simulator by Bungus Productions

Not to be controversial but Google Simulator definitely should have won this category:)

These are a handful of other games that I thought were cool and wanted to give some recognition. If you're game isn't on here, don't worry -- it's still cool.

Slacking at Work Simulator by PhilippTheProgrammer

You should really play this one with sound on.  It's a good simulation, and appropriately traumatic.

The most accurate videogame portrayal of Tobey Maguire's Spiderman.

Comatose Simulator by Quickly Named Productions
I'm gonna be honest, I wasn't sure if this was a game or a blank screen at first. Just like being comatose??

Useless Printer Simulation bu evoelise
This is a surprisingly in-depth clicker game. And man, does it take a long time.

As a game critic would say, this is the dark souls of useless simulations.

This one brings back memories. Nice game, and I laughed when the pacer test audio came on.

I'd rather not admit how many times I opened and closed that fridge.

sometimes those shovels just don't show up when you need them. Thanks for playing!

looks like i did my job then! thanks for trying it out.

Glad you liked it and that's a solid needle collection! To clarify, the green flashing only happens when you try to destroy the block that the needle is sitting on. And yeah, these farmers are pretty bad:)

Thank you! Right now i'm knee deep in another project but I do like the idea of coming back and expanding on old jam games, so I could definitely see myself revisiting this one and adding features like the ones you mentioned somewhere along the line.

Thanks! I think my approach for art was "copy minecraft and add a few fancy lights", but I'm glad you enjoyed it!

The PC was broken, just as promised!

Like cookie clicker but with some more depth and a funnier theme.  The initial slowness of the printer can be kind of frustrating but it seems like that's the point. Nice!

Nice game! The tutorial was very effective, concept was neat and the sound effects with every key press made keysmashing random stuff weirdly satisfying.

Like minecraft but without the time investment, i like it! The text adventure style was a nice change of pace and having GamerSkill as a stat was really funny to me.

Nice work everyone! The games are finished, and now you can kick back, play some other people's entries, and get some feedback on your newly finished useless simulation. The rating period goes for another four and a half days(You can check the countdown timer on the main jam page), after which i'll post one last update with the final results and some of my favorite games.

This is the exact kind of content i'm looking for

Reply
Useless Simulation Jam community · Posted in Does the simulation have to be realistic?
Bungus Productions2 years ago

Nope, anything goes really, you don't need to make the simulation accurate or base it off of real life if you don't want to.

Thanks to everyone for joining this event, I never expected this many people to be interested in my jam. Now that we are 3 days away from the time you can start creating your games, just a reminder that this is a casual jam that accepts games of any quality and scale, so if your time is limited due to real-life stuff don't feel discouraged from participating and getting something out there.

After the jam and rating period are over, I will make a post on this community page listing off the highest-rated games in each category, some of my personal favorites from the jam, and some of the cool underappreciated entries you people made, see keep an eye on this page to see an overview on some of the jam's highlights.

As always, After the jam is over and your masterpiece is submitted, remember to play and rate other people's games! It's a nice thing to do, it keeps the rating system working smoothly, and leaving a comment will probably bring in some more people giving feedback to your own entry.

My advice would be to keep the scale of your game really simple(my first jam game literally consisted of holding the spacebar to eat grass), and to have the bare minimum playable version of your game done by about halfway through the jam. That way you have comfortable time to put on finishing touches and make things just the way you want them, and you can usually expect at least one tough programming-related problem that will take that last half to figure out. Above all, don't get hung up on decisions, just make what you think is cool and have some fun with it!

This would be really cool to see made into a game and wayy more educational than anything I'm coming up with. Nice idea!

This is a really slick game and well executed! Nice job.

The 3D graphic style was neat and I liked the ability to choose from slowing down or speeding up time. I think weaving between enemy shots is a bit too precise and could have used a smaller hitbox or less enemy shots, but I guess it does fit the name of too many bullets. Nice game overall!

Managed to complete the game! It was fun to see the levels ramp up and eventually I got into a rhythm of getting as many slow motion shots in as I could against the big guy and just tanking hits from the bouncing things. The amount of bullets coming from different directions got a little overwhelming at times but I'm now really curious if it's possible to do a no damage run. Nice job!

Really neat control scheme on this one. It adds a layer of difficulty that was sometimes frustrating but feels worth it because it left some variety in how you choose to play, I tried both figuring out the specific key i needed to hold in order to go somewhere and keysmashing half my keyboard like it was a giant D-pad to move in the general direction. The way of fighting back against the boss was also fun because it required moving into dangerous areas of the screen to do damage. Nice work!

Nice work! The pixel art and music are really nice and it's a fun, easy to grasp game. I think some indication of which side of the screen the next enemy wave is going to come from would be nice but I understand the need to keep the UI simple and the ability to slow down enemies helps alleviate that issue.

This was take on bullet hell I've never really seen before and the third level was satisfying to figure out with some room for creativity. The entry was short and sweet but I think this one is worth considering expanding on because with some new mechanics and player types this could turn into a really awesome puzzle game.

Really cool theming on this one! The gameplay started off slow and then picks up really quickly, once the fish start coming fast there's a really nice flow as you react to one thing just in time for the next and wrapping around the edge of the screen plus the slowdown ability add nice escape routes. The music also helps to keep you focused but I would have liked some kind of indication of how far you are while playing to add that 'almost there' feeling when approaching a high score. Nice work!

We all know going outside in real life is a dangerous activity, but the power of simulation can help us with that. Presenting... 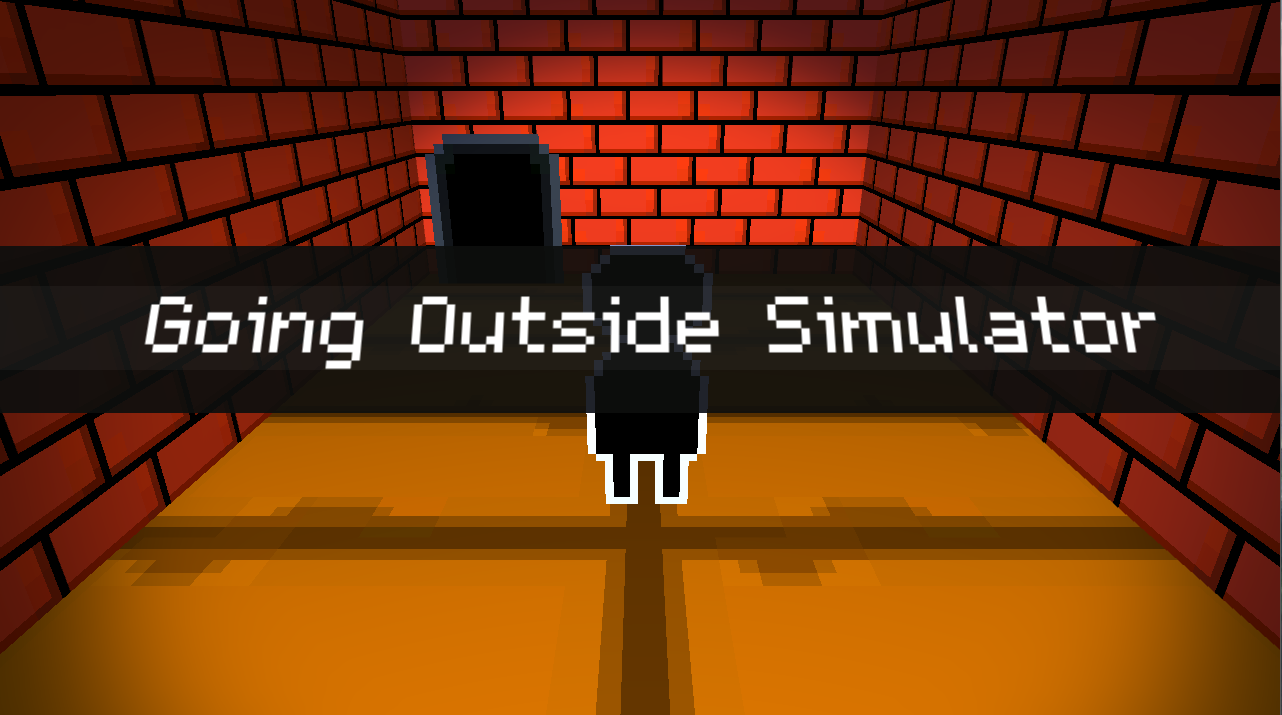 Part cautionary tale, part fun video game, and 100% realistic* , with the power of Going Outside Simulator you can make some friends, take in the fresh air, buy a new hat, and get killed by the many dangers of the outdoors from the comfort of your own home.

*this is a lie

This project was a huge learning experience for me and if you do take some time out of your day to give it a shot i'd love to hear what you think about the game. :)

NOTE: There is an ending to the game, it can be reached by making it to day 6 without dying an unfortunate death.