ewww a fried pickle doesn't count as a cookie :(

It's a cool game but it does feel quite jankey interms of controls, you did a good job considering such a small time period whilst working as the solo dev.

Damn this gets hard really fast.

It's a diffcult game and i wish there was a way to gain health but it's a really good use of the limitation. Funnily enough I feel like my game would of been a lot better if I'd have made it more similar to yours in terms of game mechanics.

Hey already wishlisted, i've been commenting on your posts on reddit all week! 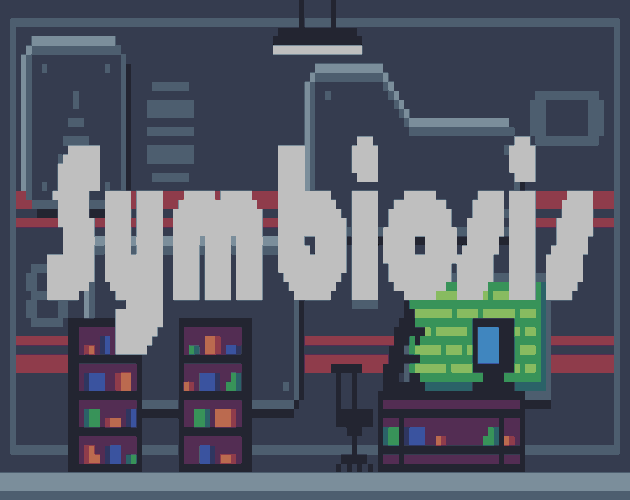 A top down shooter with plenty of juice and a decent amount of customization. Imagine the first stage of spore but with guns and a power drill. If that sounds interesting to you please keep on reading!

You'll start with one inert host body to combine with one dangerous parasite, then begin your experiment. With your help, the symbiote will try to make its way through four increasingly difficult environments, defeating its competitors to prove itself as the strongest life in the petri dish.

During the game you'll unlock 3 new hosts and 3 new parasites that offer different abilities and attacks, then you can combine them in symbiosis to match your playstyle and beat the Alpha Symbiote.

Since the brackies jam ended I've been working hard on implementing all of the feedback from the jam. Me and my team were very happy with our ranking of #169 but I felt like It could be so much better with just another week of polish.

The full details of the update can be found in my devlog here: https://brick-wall-games.itch.io/symbiosis/devlog/229178/symbiosis-post-jam-upda...

The Web GL version of the game can be found here: https://brick-wall-games.itch.io/symbiosis

It's on the way, i'll get it done by Friday! I just wanted to focus on getting all the improvements and fixes in first.

You've got a very stronge core mechanic going on, but the implementation needs a little refinement. Some more responsive controls and reducing the cool downs would really help, at the moment you've made a game of attrition which is unique, but I think this game would be a lot more fun if it realied more on tradional platformer mechanics aswell as your unique death mechanic.  Well done on creating this in a single week.

This is a really nice game, shame i never got around to playing it on stream. It can be a little awkward to remember all of the controls and the both cameras felt a little janky, but once I got them down I was able to complete a couple of levels. Keep up the good work!

Sorry that bug happened man! It's because i made a mistake, sometimes enemy attacks and abilities can occure in between a physics frame, and because the edge collider i'm using is a single line it's possible to escape the petri dish accidentally. I've already got a fix sorted for this issue for the post jam update.

Easily one of the most polished games in this jam, i'm suprised it doesn't have reviews players!

Played this on stream but didn't get a long time on it sadly. This could be a really nice project if it wasn't for the visual noise. It's very hard to see what's going on and where my player is. You might be able to fix this by just ordering the rendering layers so that enemies and the player are always shown infront of bullets.

Loved playing this on stream despite my inability to finish the game. I'm currently listening to Fragmentum - Scrap Town to wind down after my 3 hour long stream. Thanks for suggesting this game I really enjoyed the parts of it I could play!

Yo came here from youtube, shame about the Web GL Builds, I literally have no clue what went wrong with the sound this time. I might be able to help you debug the issue if you want.

I mentioned Lufthausers during conept. I really wanted to make a game that felt JUICY!

Strong talk for someone that didn't fight the boss ;)
But yeah it's quite easy up until the boss fight. I think a large part of the problems with our game is just not giving the player enough information; we wanted little prompts to pop up and explain everything but i didn't get the time to implement them sadly, hopefully the updated game page helps. Thanks for playing!

Very cool but very difficult. I got stuck, there was this green boss looking insect that was out healing my damage. It had 20 hp and was healing 12 hp per turn, so i had to quit, which is a big shame.

Hey I played this on stream earlier and didn't get very far, just came back to it offstream and got abit futher. It's a nice game, but I think the difficult curve is a bit weird, some levels just seem to be way harder than others, I get that the difficult of puzzles is kinda of abstract and hard to balance.

I played this on stream earlier and really enjoyed it!

Only constructive feedback i can give is making the chime sfx a little louder cause it seems too quite.

I've updated the controls on the page so they're more informative. I get that they're super weird, but it kinda the point. I wanted each host to feel different from the last.

This was a really nice submission, what of the best I've played so far. Centering the camera a little bit would of helped with the view, and having both characters jump at the same time so i don't have to spam the space bar to get up ledges would have been nice.

oh hey I think i've watched some of your youtube videos! I got stuck on the 10th level, couldn't work out the timing for the jump. Super nice game lots of polish, a web Gl version would of been nice though. keep up the good work man.

Wow that grainy effect you've got on the graphics are super nice, is that a shader or is it baked into the art?

I saved 36 dwarfs, i hope that's a good score! I really like the art style for this game is was really cute. It would have been cool if the dwarfs I collect though each level persisted and I could slow a mass an army of dwarfs with different weapons and stuff to fight some kind of boss.

It's nice to someone create a card game in an a week long jam, cause they can be difficult. There are some little changes you could of made just to make this game so much easier to understand:

This is what I ended up with at the end of the game, i probably should of pushed myself to make villages but I didn't feel like there was anything really driving me to do so other than the score. Nice game with an intersting idea. 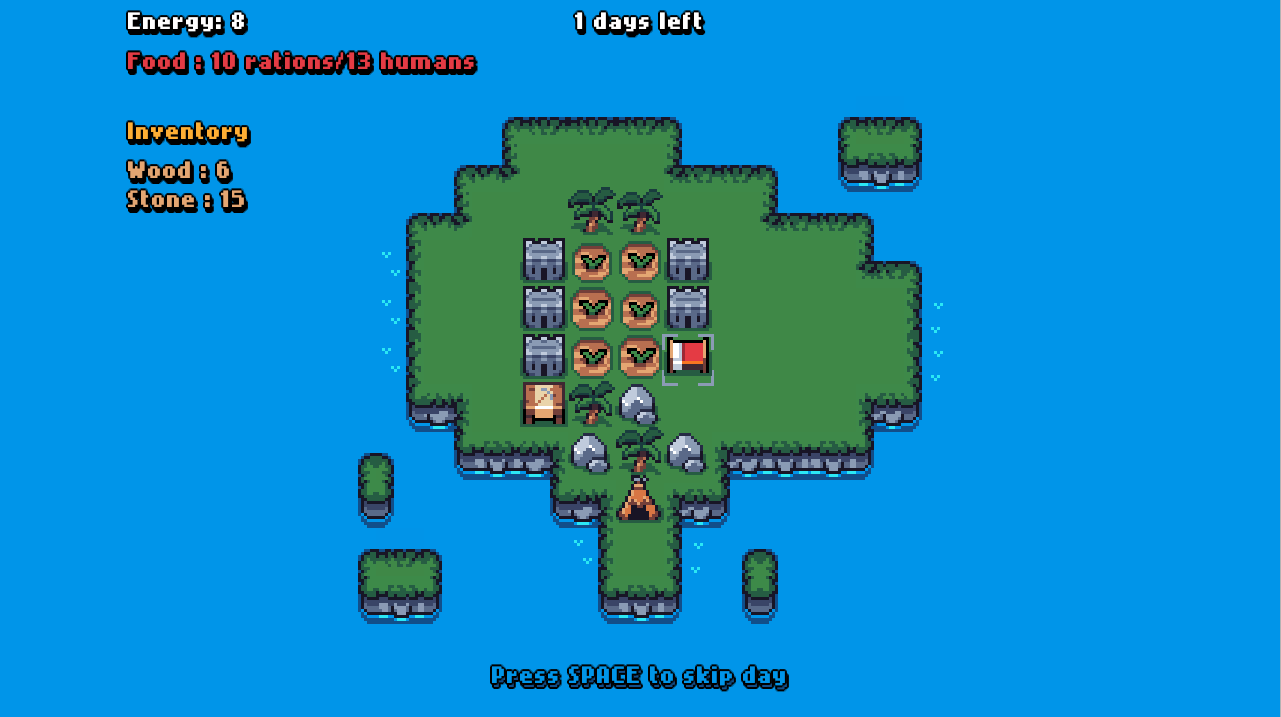 Nice game, super well polished. The difficult curve was quite hard and it took me ages just to get over that first pole, but i finished the game in the end!

Side note, there's a lot of tile tearing going, if you want any advice on how to fix it send me a reply.

This is a cute game but the controls felt a little cluncky. If think that if you made it so that the speed only decreasaed as you moved the game would be a lot fairer.

I'm going to do a post jam update with a bunch of bug fixes, i'll upload a desktop version then. I can't change any download settings until the jam is over sadly. PLease subscribe to my itch for further updates!

Thanks man! I really wanted to experiment with the controls in this game. I thought if they were all the same players would get bored quickly, making the 4th unlock the easiest might not have been my best idea.

I'm glad my team wasn't the only one to do a top down shooter. We didn't think of using 2 guns though. Adaptive music can be a pain so getting it in and working in just one week is impressive enough. I wanted to do that by ran out of time. Nice work dude.

This was great, you clearly put a lot of thought and effort into this game! It was a little fustrating when i was close to completing a level then my guy died and it reset all of the others guys,

Wishlisting this for when i'm not broke. It's super impressive that you were able to create a game for a console that's been discontinued for 2 decades.

Are you still looking for a team?

This is a very difficult game, and i've tried to play it a couple times this week but struggled to get my rocket working properly. Starting with just vertical thrust first to get the player to height goals then moving into directional control rockets would make the difficult curve a lot more forgiving.

There are also some small bugs were controls for rockets are appearing on my ship but I haven't added them, and the pause button graphic is often wrong.

When are we getting a windows or Web GL build for this project? I'd like to give it a try!

Nice game! I noticed enemies we're getting stuck on the shop and the game needed some more juice but it was a great submission, especially since you did the entire thing by yourself in just 3 days.

This is a really well polished game, it did feel a little awkward having to hold down a key to keep the player of the middle lane but you get used to it. Nice job!