Thank you :) I just checked out Pluto's Corner, it rules!

Reply
RoboVDino community » Everything Else · Posted in Congrats!
Alex Bair Games4 years ago

Thanks, Emmy! I hope you enjoy it, I plan on continuing to add content  :)

Hey fluffy, thanks for picking up RoboVDino, I hope you enjoy it!

No worries about the platform, I set my profit split on itch to 70/30 so Itch is the same as other platforms :)

RoboVDino puts players in control of FILO, the unreasonably angry robot. Pick up trash, throw it at Dinos to knock them out, and throw the Dinos into the goal before they wake up. 1-5 player cooperative arcade action combined with simple controls make RoboVDino a party game for all ages and skill levels.

Yes! Thanks again for your suggestions!

I wanted to let you know I added some pick up animations to help players notice when they pick something up.

Thanks again for the great idea!

It was a blast! I got to sit in on some great panels (that I hope become public, since I'd like to watch them again) and met a bunch of cool people. I'm hoping I can do a write-up of it soon since I haven't posted to my blawg in weeks.

Extending arms is a good thought! I'll give that a shot and see how it looks.

Ah jeeze, con crud! I'm glad you're doing better, that's the worst thing to bring back from a con.

What do you think of this arcade floor tile? 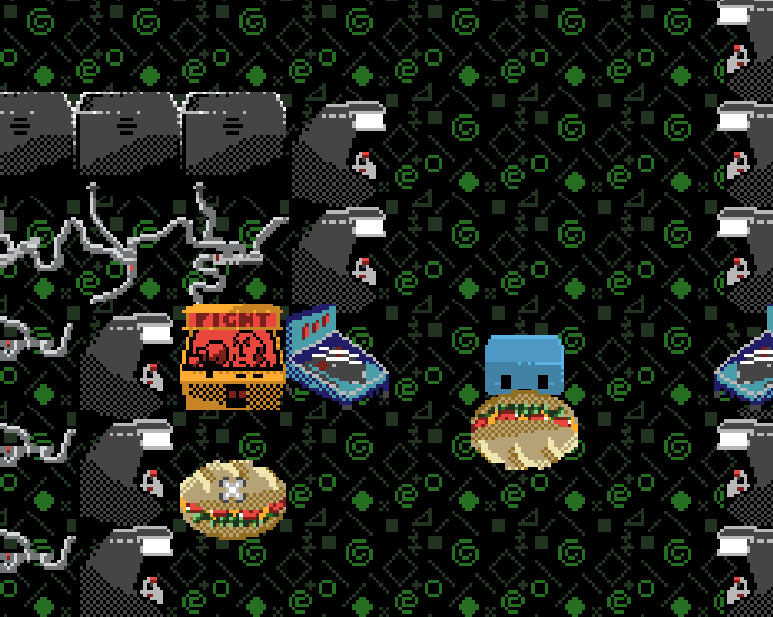 I plan on recoloring the arcade cabinets to have complimentary colors after I settle on a floor color.

Also, thank you for the pickup animation suggestion, my thought process stopped with a "bloop" sound effect and the hold animation set for the robot... 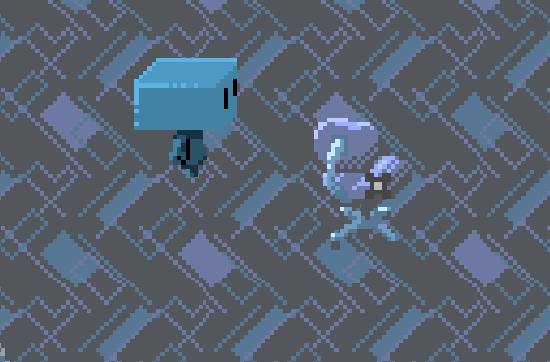 ...but tiny arms make it really difficult for players to see on a big screen.

Thank you very much for your thoughtful feedback, Emmy. I am happy you enjoyed the experience, the basis for RoboVDino, and my presenting it! I read through your suggestions, and wanted to let you know how they fit in, since they are fun, consistent, and great ideas. I plan on updating RoboVDino  after it releases and as long as players are still playing. Suggestions like yours make great content for future updates.

The dino attacks you described match up with dinosaurs (ankylosaurus, sauropods, pterosaurs) I have struggled to imagine challenges they would pose to players, so I added a couple of notes to my designs on those dinos to try out some attack ideas you came up with!

Item variety is a priority for the release and future updates, so keep an eye out.

Prior to ECCC, I never considered competitive vs. mode, but it was the most requested feature this weekend by a long shot. I plan on at least trying a prototype in the future.

The biggest enemy of players this weekend was the camera (at least until they learned how to navigate together as a team), so I plan on trying out some different ideas. Player markers are definitely in that list since they work for many other games.

I agree the carpet in the arcade needs work. I tried reworking it once before to a different arcade pattern (I modeled it after a pattern used in UK arcades in the eighties, but made it purple instead of bright blue). Because of some constraints with my tilemaps, I am having to repurpose the pattern, but here it is: 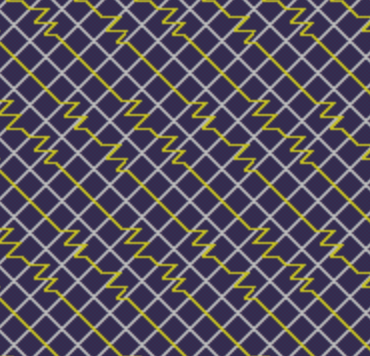 The fundamental problem with arcade carpet is it's all really, really busy! I do plan on working it over until I find something I like. I plan on at least trying to tone it down, like you suggested.

Consistency in the goals are a goal (pun not-intended, for once) in RoboVDino's design. I have a couple of refinements planned, since the arrow toward the goal was often hard to spot in the general carnage of 4-player mode.

Again, thank you for all of your great input and thank you so much for playing!

Reply
RoboVDino community » Bugs · Posted in I died with a dino, when I restarted, I had that dino again!
Alex Bair Games4 years ago

I think I got this issue resolved as of the latest update:

I think I got this resolved in the latest update, check it out:

I'm going to leave this open until others confirm the difficulty progression feels better. Should be improved as of this update:

Check out the latest update, I stuck in that smaller dialog and added a transparency to it when a player is walking south: 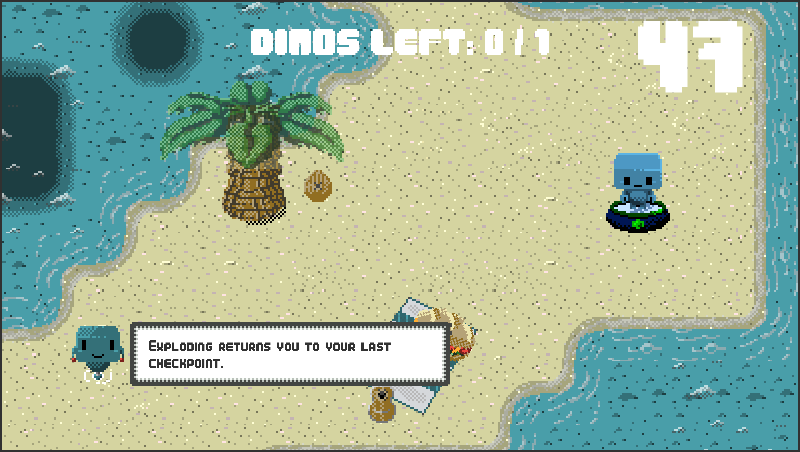 I realize we'll still have issues with the dialog obscuring stuff in the play field (still working on a solution by either moving the camera or maybe transparency), but how is the readability on that text?

After level 3, players hit a wall of difficulty that's kind of insane. We go from 1, 3, 9, and then like 20-30 dinos required to pass a level. The problem is in the difficulty agent script on players needing a little dampening to prevent that crazy jump.

Its showing up in my search results now :) 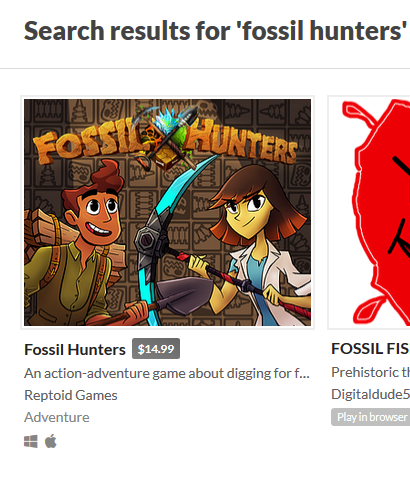 I was able to buy Fossil Hunters on Itch after seeing your Tweet, but have you checked if Fossil Hunters is listed in Itch search results?  I can find other Reptoid Games from the search bar, but nothing for Fossil Hunters. 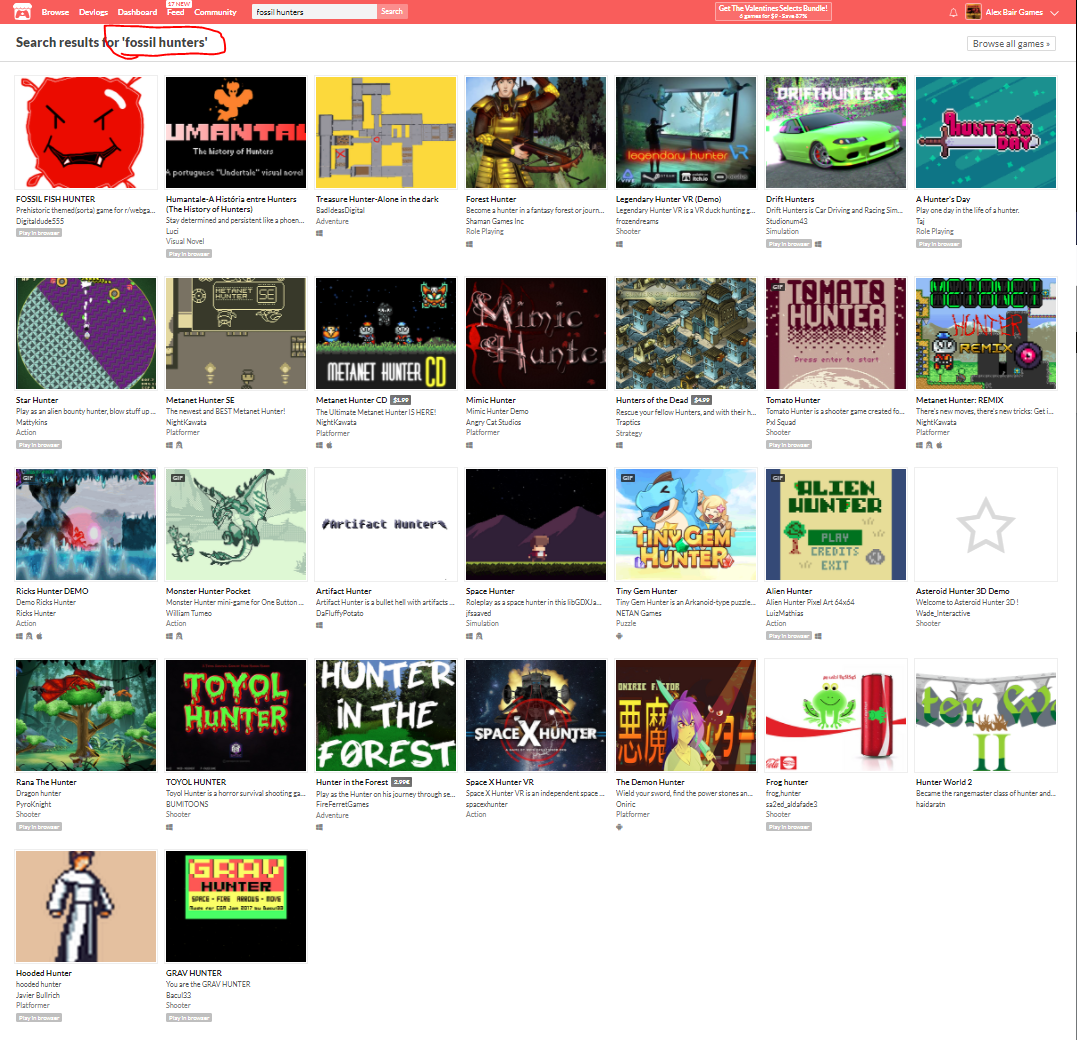 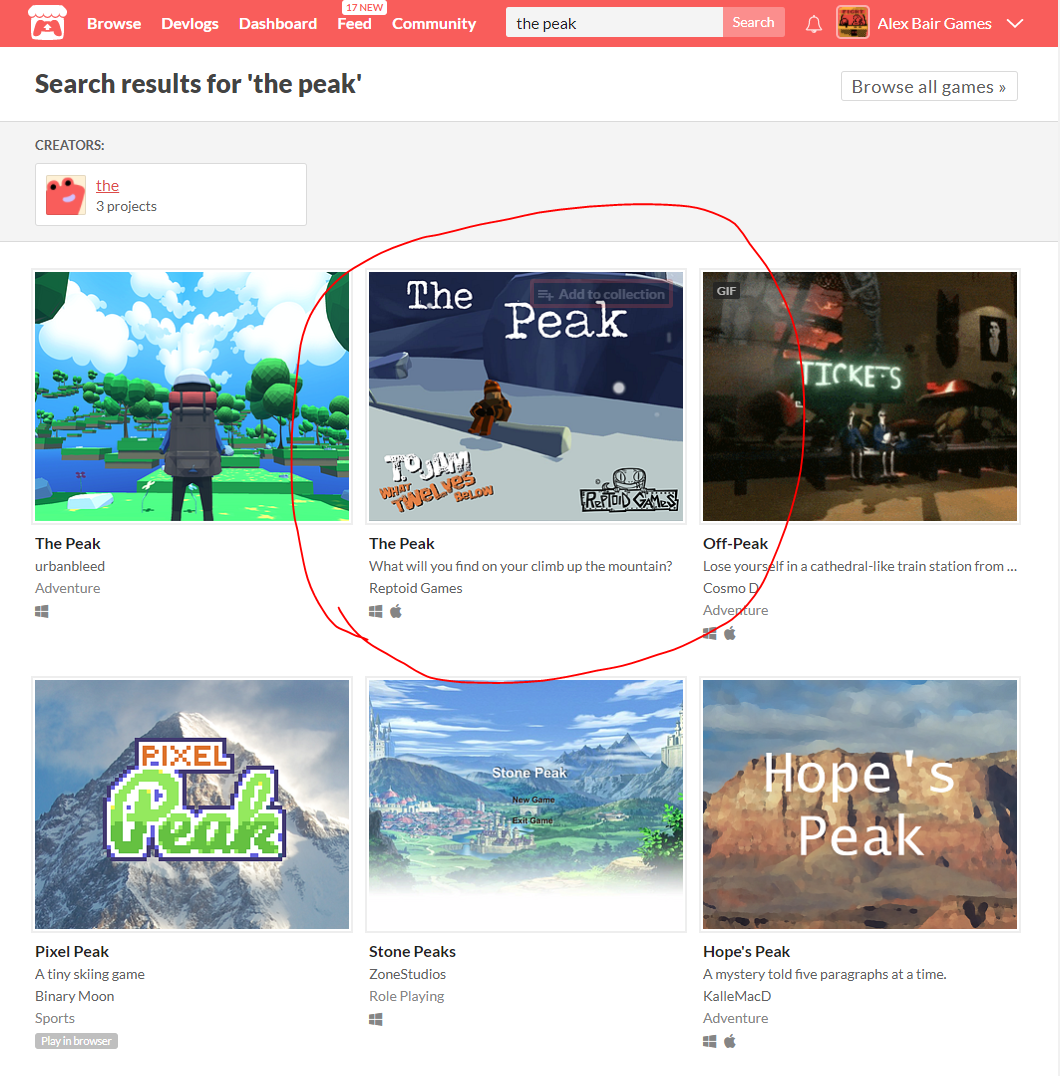 Thanks for expanding the dino game genre :)

I haven't identified reproduction steps, but it is really bad looking to have a fireball slide in from off-screen and there is no t-rex nearby.

This is a bad usability problem since it makes people lose their progress at the demo. A half-dozen people thought the demo was one level :(