Jump and run
Submitted by MissingTheMoon (@MoonyDev) — 31 minutes, 10 seconds before the deadline
Add to collection 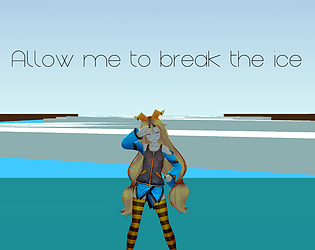 Anything else you want players to know before they play?
The game is kind of hard, and it takes around 20 minutes to finish (if your fast you just need a minute)

Controls were very awkward (to me at least). Having a running button was pointless since it was pretty much always mandatory to be running. Dunno if walking is required later on and if it is, having it be toggleable would be better. And because there was no friction at all, stopping was pretty much a no-go as well (also because of the tilting/falling platforms). And because of that you were required to hold forward down all the time as well. Would have liked the turning speed to be a bit faster.

Why just plot down all the keys to the left side of the keyboard? Sure, WASD controls are a standard for FPS games and others using the mouse but no point in making the left hand do all the work when the right (that being even the dominant hand for vast majority of people) one is doing FA. After almost cramping my hand holding down all these buttons I remembered that it was an Unity project so I backed out and tried the config dialog. But nope, you just hard coded the single keys in. Might wanna use that (or some other input manager) in the future, makes it easier to add alternative keys or even allow players to configure them.

The movement speed and the animation speeds didn't match at all, made it look weird. Adding a small dropshadow under the character would be nice, making it a bit easier to keep up with the perspective and positioning.

One easy visual addition that comes to mind is adding a bit of a ring around the block that is falling to the water. You know, kinda like waves. It would help make sense of what is actually going on instead of just looking like a glitch. I first thought that the whole thing was just z-fighting ;)

Props for adding keyboard shortcuts for retry and skipping the start animation. Seen so many jam games that are 100% keyboard controlled except for requiring the player to click on a button to retry or such.

Sorry for the inconvenience that all that caused you. I took notes, and I will do better next time.

See you at the next game jam :D

Thanks for adding the mac build :) It'd be nice to have variable jump height, so I could hold spacebar for a long jump, or just tap it for a small hop (would be useful in that area after first checkpoint for example). Movement is a bit slippery, a bit more friction would be nice for tighter controls, as well as slightly faster turn speed maybe? The 'game over' ui isn't scaling to fit the screen size. If I play at 1280x720 for example, it's pretty much completely cut off.
Anyway, thanks for the game, very challenging!

No thank you for mentioning it.

Everything I did in this game was new to me, so the time was over before I could start tweeking the numbers and change the movement a little to make it feel better. Your the first that realized how weird the jump is. It would be a lot better with a mario jump ^^

Thanks for playing, and for your feedback :)

Hello, you download is marked as mac-friendly, but I'm unable to run the .exe. Let me know if you get a mac build out :)

Now there should be a mac version :)

Got to the second section (thank goodness for checkpoints), and gosh its so hard to control! I think the animation of the character throws me off a bit (if I press left/right she walks in those directions but the character remains forward facing) and the physics of the ice (and its interaction on the character movement) is really hard to anticipate. Thankfully there wasn't slippery ice floors to contend with, else this would be insanely challenging. Kudos for attempting a 3D platformer during a jam though!

Submitted
The Man Who Fell Sideways
LikeReply
MissingTheMoonDeveloper3 years ago

Thanks for playing :)
Wanted to use cinemachine since I really like it ^^ Was my first time doing a 3D game :D
The thing with "where should the character face was confusing :/ She faces the direction, her movement vector is facing. I guess it should face in the direction you want her to move towards instead.

I think the ice should have some visual feedback, to let people know why it goes down so that they anticipate and understand how it goes down.

Thanks for pointing these things out.

I like the intro but don't see anything crazy special about the game other than just a normal plat-former. Next time try to make a unique mechanic and it will work much better!

Anyway one thing I do want to mention is I'm doing a review of design on the games in this jam so here's a shameless plug to my channel if you want to be notified of the vid when released: https://www.youtube.com/channel/UC7Vj46GGL9VMUvd4YTMtjXg

Thanks for the criticism. I will keep that in mind for the next one. And I will check out that video :)

there is no linux verion but it's marked as it is

The one version should be for windows, linux and mac. I dont have linux or a mac so I cant verify, but it should work on all of them.

It contains only .exe file which is Windows executable.

I'm done with another game Jam now I got time to figure this out. If you have some time on yourself could you help me out?
Can you open the windows version? If not, what kind of file type do you need? Its supposed to work but - I guess Im doing something wrong - I dont know what to look for.

But you don't have to do it because of me its fine if you dont have time for that :)

No its actually vice versa :D You dont have to help me :) I do this, because this wont be the last game I make. And they should definetly work on all platforms that I think they would work on. Thanks for your help!

I now uploaded a Linux version, please tell me if it works.

ya I made a stupid mistake now it should work XD

Thank you so much for your patience and time! And thank you for playing :)