Go on a wild bun safari and find the royal bun!
Submitted by BlazingMammothGames (@BlazingMammoth) — 6 hours, 28 minutes before the deadline
Add to collection 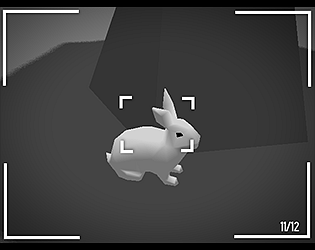 Anything else you want players to know before they play?
I knew at the outset that I wouldn't have time to make any of my own assets, so big props to all the people who have made license-able assets available online!

I'd love to hear feedback from you—good or bad! Did you like it? Was something broken?

Eep, I love this! Super cute and quite fun. I do find that I have to take multiple pictures of the same buns to get a score higher than a C, but still. Very nice work.

Thanks! Although it's not clear during the scoring phase, the professor only takes into account your highest-rated photo of each individual bun to calculate the ultimate score (to prevent "cheating" by taking the same picture of the king/queen bun over and and over again). Thanks for checking it out!

I wished the buns moved or got scared if you got too close or moved too quickly. Would've been a nice challenge and gave a reason for running vs crouching etc. Or trying to get that 'close-up shot'. But overall, great experience and very challenging!

Thanks! Definitely agree about the moving buns, unfortunately I didn't have time to dive into that.

Fun and cute!
I can't really seem to get close enough for the professor to be satisfied, even sometime when right in front of the bun with the zoom...
The "friends" value is also a bit nebulous.

Unfortunately sometimes there's just no pleasing some professors :P The friends value is a multiplier for if there are multiple buns in the frame. It can be hard to get, but very worthwhile if you can manage it!

Felt really nice playing it, and great job with the camera dynamics, like more points the better photography! I never got over a C, but I played through several times and had a ton of fun.

Thanks! Yea, in hindsight a crouch toggle probably would have been better. I especially ran into this issue when trying to record gameplay footage, but I didn't have time to sort it out!

A cute photo taking game, and the implementation of camera snapping and photo scoring is well done! Would be cool with some movement of the buns as I had thought that going up too near might startle them sending them scurrying about, and a mode without a time limit for a more relaxing game. Found King Bun which was super squee.

Submitted
The Man Who Fell Sideways
LikeReply
BlazingMammothGamesDeveloper2 years ago

Thanks! Making the buns skittish would certainly make for a more engaging game experience, I agree! I'm glad you found the King Bun, although there is one in every play-through they can be hard to find!

Would love for the buns to move around a bit! You mentioned being unhappy with the mouse controls, so just wanted to mention that they felt perfect to me. Was an enjoyable experience overall, well done.

This is pretty cute! :) It's a nice little game about photographing buns, and that's just a wonderful thing.  The assets are well chosen, and I really enjoyed taking pictures.  And the names of the rabbits are very cute.

Though I found out later that I was scored on rabbit size (which I kinda grasped from the comic) and also closeness to the rabbit (I didn't want to startle them, so I was at least a foot away), which would've been nice to know before I started taking pictures.

Also, there is no real sound or music in this game (other than the camera shutter sound, I suppose).  It would be nice to have a music track that runs for the duration of time we're supposed to be taking pictures (and also a timer--night fell REALLY quickly once it started to get dark, barely giving me any time to get more pics), and sound effects for "ok", "good", and "great" bun pictures.  Perhaps after the jam?

But other than those things, I really enjoyed this game.  It's a fun little break from life to take pictures of rabbits, and that's quite nice. :) Good job with this.

Thanks! There is actually ambient forest noise, but it's quite quiet so you may not have heard it. I considered some music for this, but my composing skills aren't where I'd like them to be in order to couple with the relaxing, almost contemplative pace of the game. I struggled a fair amount with the timer as well; in hindsight I should have changed it to a camera battery dying mechanic, which could display the time left when you have the camera out.

Thanks for taking the time to check it out!

It was a peaceful little game. The graphics work well together and I liked the names of the buns. It would be nice if they moved around, or at least had an idle animation.

Thanks! Unfortunately I didn't have time to figure out animations, but I agree—that would have added a lot to the game. Thanks for checking it out!

I loved the polish on this game! It reminded me a lot of Pokemon snap! The movement and controls felt right but I think you should add movement to the buns and be able to sneak up on them to make the act of getting to them engaging. Other than that I enjoyed it! Anyway one thing I do want to mention is I'm doing a review of design on the games in this jam so here's a shameless plug to my channel if you want to be notified of the vid when released: https://www.youtube.com/channel/UC7Vj46GGL9VMUvd4YTMtjXg

Thanks! I'm still not happy with the mouselook controls.. they always feel either too sensitive or too slow, and I can't figure out why. I would have loved to add more interaction and movement with the buns, but unfortunately I didn't have enough time to figure that out. Thanks for checking it out!