This game would be really good for a discussion of autonomy. I really like the direction you took the theme.

I was looking forward to checking this one out. I love the cards! Definitely keep working on this project. I'd love to see a full version.

I was looking forward to checking this one out. I love the cards! Definitely keep working on this project. I'd love to see a full version.

This is a great entry! You've made great use of the theme.

An interesting point to be made in the free will debate concerns the fact that our freedoms are already restricted pretty significantly by our circumstances. For example, by not having oatmeal in my pantry I can't have oatmeal for breakfast.

Visual novels are generally a good choice for the philosophy game jam. Your writing was very good as well. It was a very enjoyable read.

It will be posted when the jam starts on the jam page. It will also be given in the discord and tweeted out by @philgamejam.

Thanks for the comment. I'd really like to continue it. Unfortunately finishing school and teaching took up too much time. However, I will be working as a logic teacher for the next few years and so I will probably be working on this game for use in my classes. Your encouragement makes me want to finish it even more.

Nice entry. I went through quite a few of the different paths.

The controls on dragging the augmentations at the beginning of the game are a little funky. I figured out that I was dragging too quickly and I was losing track of what I was trying to pick.

There are some really cool stuff that can be done with this. For example, the player could actually speak into a microphone to further play the role of Sally.

It sure is creepy having so many devices listening in on us all the time.

Great entry.  The artistic design of the game is spot on. Perhaps make the timer a little more forgiving. I found myself scrambling to get through each stat, which left me no time to consider the ethical implications of what I was doing. Then again, maybe that's the point.

That was a very interesting story with important ethical dilemmas. I'll have to come back and play through some of the other story paths.

Great game as always. I used Happy Mice when I was teaching Malthus earlier this semester and I can see using this game when I teach A.I. ethics in the future. Both games you've submitted to the game jams are perfect for use in class.

Yeah, that's what I'd like to be the case for round 3 of this jam.

While there is no way to stop people from starting now, people are strongly encouraged to work within the game jam rather than before hand. It's kind of part of the fun of a jam for people to be working at the same time, sharing their progress as they go.

That would be fine. Of course, the normal game jam warning would apply that it might be harder to find players.

On a side note: part of the goal of these philosophy game jams is to motivate the creation of games that can be used in philosophy classes. A philosophical board game or ttrpg would be great for those purposes.

A game jam for making philosophical video games. This is the second philosophy game jam and this time the theme is "Ethics and Technology." Here is link to the first jam so you can see some games that were made for the previous jam: https://itch.io/jam/philosophy-game-jam.

Yeah, I was debating whether or not to require matches to be made in a single move. One thing I like about the current system is that you can jump a knight across the board to get it where you need it. That is, it gives more of a chess feeling being able to string together moves. I'm hoping that putting in various obstacles like immovable pieces and barricades will make the game more difficult. I also thought about adding a time-penalty for any moves that do not result in a match to discourage randomly moving pieces around.

I really like the idea of using actual audio from podcasts. Having actual readings of the philosophy in the game while your walking around the table, for example, really brings out the philosophical point. This kind of thing could be really useful in helping students understand difficult philosophical content by letting them explore it at their own pace.

My suggestions would be to give a little more direction to the player, improve the integration of the audio, and polish the art assets. It took me a little too long to figure out that there was a light switch in the corner of the first room. As for the audio, it was a little jarring when it first started playing.

This is a really funny game and an interesting experience. I liked the variety of different movement patterns.

Perhaps change the hemlock to a sprite in the same style as Socrates. It seemed kind of weird having it be a 3d purple ball.

This is fantastic! The incorporation of ethical theories is great. I also enjoyed the craziness of many of the plaintiffs and defendants.

Of course, the art and sound could use some work, but I'm sure you had your hands busy with all of the writing. If you polish it off some I would love to use it in a class.

I don't think I've ever spent so much time with a jam entry before. The writing and voice acting were great. The detail on the ice and zamboni looked fantastic and the more rudimentary surroundings gave the game the perfect isolating feeling. The music was also great.

Well, I feel like a horrible person after hearing all of those mice dying. I love the ethical dilemma in the game. If you're goal is to maximize happiness you have to increase the mouse population and keep them all well fed. Of course, this is hard to sustain and failure results in an enormous amount of suffering. Is the risk associated with maximizing happiness worth it when the cost of failure is so high? Maybe by attempting to have a satisfactory amount of happiness in the world we are we are more likely to actually maximize happiness.

The art for the mice was great, as was the design of the ui. My only complaints are (i) I wish everything moved a little slower and (ii) the sfx for the eating got a little out of hand when there were a lot of mice.

Reply
Philosophy Game Jam community · Posted in Does the game have to be educational?
tallshrimp2 years ago

It doesn't have to be educational. My goals in making philosophy games is to teach philosophy, since teaching is my job. But any game that is philosophical is great!

Kind of. Excluding the result of angering the cult, the story takes place over 9 days.

1. You do everything you're told and your family lives and you just keep repeating the same activities after all of the special characters have come and gone.

2. You fail to do what you're told and you sacrifice one of your family members, at which point everything continues as usual just without family at home.

3. You turn on the cult leader and stab him, resulting in the player being sacrificed.

Such a cute little game! When I was looking through some of the early entries I knew I wanted to play this one.

One weird bug report: I noticed while using tools that shoot (gun-thing, and watering can) I sometimes lost control of the character. For example, I couldn't move down and right.

Thanks so much for the bug reports. This is fantastic! Once I get some time I'll go in and fix these along with adding more content.

Reply
Philosophy Game Jam community · Replied to tom_manford in Discord group to partner up with people?
tallshrimp2 years ago

You are right. I forgot to set it to never expire. Here's another link: https://discord.gg/mN4B8cw

Since this game jam may draw some philosophers who are new to making games, I'll post some resources here to get you started. If you have any suggestions for resources that are not listed here, please comment them below.

Ok. I set up a discord server. Here's the link: PhilosophyGameJam Discord Server. I'll post it on the main page as well.

Use this address instead: https://discord.gg/mN4B8cw

Thanks for trying my game out!

I just added the link. I probably shouldn't make posts right before going to bed :)

Thanks for reminding me.

Synced Warriors is a puzzle game where each button press controls all of the characters on the screen at the same time. The main feature of the game is that each character moves relative to the direction they are facing. This means that if you instruct the characters to move left, they do not move to the left relative to the camera. Instead, they move left relative to the direction they are facing. This makes for some interesting puzzle situations as you attempt to orchestrate a battle between the forces of red, blue, green, and yellow.

This game was spawned from two failed Ludum Dare projects. The first was a game about modal logic where you control characters in different possible worlds. The second was a sokoban game about moving books and trash around in an office so that you don't get trapped inside. I've been working on it in my free time for the last 6 months or so. I hope you enjoy playing it as much as I do.

The game is currently priced at $1. This will increase to $1.99 when the game is released on Steam in a likely more polished form. So, get in on the ground floor of this awesome puzzle experience!

Place any suggestions you have in this thread.

I just "released" version 1.0 of Synced Warriors here on itch.io. A Steam release as well as a Google Play release will happen on January 8th. For now, you can get the game HERE for the price of a cup of coffee. That is, a cup of coffee I will drink while making games and avoiding my dissertation. There is a demo as well, so you can try before you buy me that coffee.

Here is the first trailer I have made for a game (another, hopefully better one, will come for the Steam release):

Wow, that was unexpectedly difficult. I love the idea. It would be nice if it started out a little slower, though. If you put in some targets as well that may tempt the player to move closer to the edge, it might increase player retention.

Thanks for trying so much with my buggy incomplete game. I'm disappointed with the state the game is in now, but I think some small changes, many of which you have pointed out, will substantially improve the game. I hope you'll try the post-jam version.

Well ... between travel and my dissertation I haven't had much time to work on this project.

However, I have now completed all of the levels. All I have left to do is fix the UI, add a password reset for the user created levels login, and improve the touch controls for the mobile version.

Here are some screenshots of some of the levels. 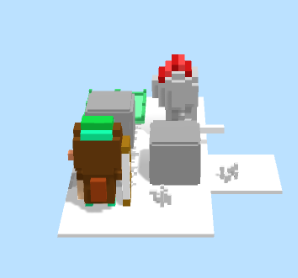