The exciting world of artisanal antiques
Submitted by Joan Sol ROO — 18 hours, 38 minutes before the deadline
Add to collection 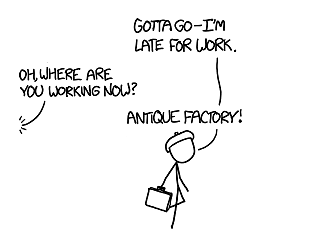 Please list any pre-made art/music/other assets that you used.
mostly stolen XKCD images, and the music is from Ketsa (http://freemusicarchive.org/music/Ketsa/ )

Anything else you want players to know before they play?
This will have to be the final version. For now the TODO list in order to use your *imagination* of how I envisioned the final version, and I will do another iteration after the jam is closed (i don't want to cheat).

This comic was chosen among 10 comics obtained by selecting a "random" comic.

Interesting way of telling a narrative through the game mechanics and presenting a dilemma between fast forwarding through the game's content and taking it slow (which might be suboptimal in the enjoyment of the game). Love the way the music syncs up with the time travel, but I couldn't resist speeding up the gameplay just to listen to the BGM. The squirrels kind of get stuck if you click on one  too many of them at the same time.

hey, thank you for trying it!

Glad you liked it, if you want more music like that, you can check ketsa's website http://freemusicarchive.org/music/Ketsa/

Sticky squirrels: somebody else mentioned that bug, I should look into that.

Loved it.
Great narrative, with great sound design to go with it!
It totally missed that there was a way to get new object until I read the comments though.
I feel that a "legacy mode" as said in the description would take away a lot of what made he ending hit for me.

Great you liked it!

The game is not very clear in its current state, mostly because i did not find the proper way of adding explanations in game without having extra panels.

The legacy idea was just to have a justification for some to invest time with their family.

I will upload a new patch later today handling the family and auto-pausing, so people do not miss important stuff.

Woah, the narrative in this game is fantastic! The conflict between appreciating the moment and fast-forwarding through life  is well brought by the mechanics. And it fits the original character, who here seems to appreciate staying in a room as well  for savoring the seconds than to see years pass by. The fact that there is no lose condition and that the money is just here as some kind of score gives some kind of absurd tone, and in the end it feels like there is no "wrong" way to live this life. The time spent with the family (one time every week, then years, then decades…), completely off screen (letting imagining the preciousness of these moments), is also a very clever touch.

Well, all of this is my own personal interpretation of course. But I really enjoyed the reflexions and emotions this game achieved to inspired to me! =)

Plus the dynamic music is incredibly well done. That's an awesome aspect of the game as well! Congrats.

Hey thanks! very happy to get this kind of feedback.

The thing about valuating the present moment was the idea (even when it feels it might not be very relevant for the original comic). I kinda work on that in my profesional life .

That said, i will try to upload a patch later today with better family interactions.

That is a very ambitious description.  Let's see how this game measures up. :)

It certainly is an interesting one.  To me, it doesn't really hit the mark of the original xkcd comic, but it's still a fine game on its own.  I love that the clock and date line up to the real world, and that you can fast-forward, pause, and play through the days.

The optimal way to play (if you don't want to sit there in real time) is to really fast-forward, and I didn't realize until later that doing that meant I was missing several important events (the deliveries and my family).  I feel like there's some kind of commentary about fast forwarding through life here, but in any case, the main elements of the game (family and antique deliveries) clashing with the best way to play the game (fast-forwarding through the days to reach the good stuff) is not good.  May I suggest adding buttons for morning, noon, and night as well?

I like how the music changes depending on whether you're fast-forwarding, paused, etc.  It's a nice touch.  And it's pretty funny that you can sell squirrels and turtles (I fast-forwarded a lot at once during my playthrough, which caused a tree to grow in my house for some reason and squirrels to come out of it).  I do have a big question, though: Who are you selling to?  The game never explains this; it's a game about owning a business but I barely know how it even operates.

The description said I would lose my family (which was only my wife, as far as I could tell) if I kept avoiding them, but I never did?  Also, it said I would have the option to pass my antique empire down to them--when does/can that happen?  I also didn't die until 2060, for the record.

This is an interesting game.  I liked it, but I wanted more out of it.  Perhaps there'll be an update after the jam?  In any case, thanks for making it. :)

And about the best way of "playing the game", playing fast is not optimal, just fast (people argue you should play Banished at x1 speed, even when it is absurdly slow). And that is the point of this game, not very playful, just a joke. And the lack of instructions, it is a combination of lack of time and "black box" mechanic.

The game has two objectives: (1) a very stupidly basic one, see your furniture become slightly more valuable during your lifetime (as if you played time in the comic), and (2) a second, the timescale of this craftsmanship, in contrast with the daily life.

In retrospective, this was too ambitious for 24 hours of work, and has some lackluster aspects...  The idea was to have a relationship with your family through the messages, and having a checkbox for "pause the game when something happens", but did not manage to have it in time. Also, the idea was also to have a "buy and sell through the newspaper" option. The most important feature missing is the charts showing you the pass of time, a XKCD essential.

if your family did not leave you, then there is a bug i need to fix.

The squirrels are for the alt-text of the original comic (in a very basic  way): time processes nuts, so let's use squirrels to reduce the impact of that. The tree is just an excuse to spawn squirrels.

Next weekend is LudumDare , and i plan to participate, but maybe after that I will use my spare time to implement the TODO list.

very nice work. Loved the music and the tempo changes. Almost has a morality story feel to it.

Seems to be working as expected :)
All this good feedback is motivating me to go for a post-jam update, thank you!

Glad you liked it :D

Really neat concept can't wait to return when final version comes out and I ADORE the dynamic music it just really makes everything so much more powerful! Not just the music itself but how to made it dynamic! Great work so far! Anyway one thing I do want to mention is I'm doing a review of design on the games in this jam so here's a shameless plug to my channel if you want to be notified of the vid when released: https://www.youtube.com/channel/UC7Vj46GGL9VMUvd4YTMtjXg

Hey! glad you liked it.
Sadly, I have to go to work, so the TODO list will stay unresolved.

The Experience is enjoyable enough as is imo