Submitted by BinadaH — 1 day, 23 minutes before the deadline
Add to collection 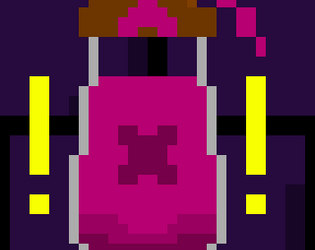 How does your game utilize the limitation and theme?
The main focus of the game is to help the witch to collect ingredients that are necessary to make the "X POTION". Once you get the order by the witch, you have to collect the item and take it back to her.

You and one other jammer

Can you please change the interaction button to something that it not right near the restart button?

Fun game, but giving some attribution to the minecraft sfx you used is probably best.

Really challenging puzzle platformer, I enjoyed it! Although my platforming skills could definitely use some work. The puzzles were well put together and I liked the art style too. Good job!

I played through two levels, and could probably have got further with more practice(I probably could have made it, but I just figured out what I would do if I could press the keys at slightly more accurate times, then watched the video, trying to solve the puzzles from there before seeing the person on the video solve them, so I did get to see what I could probably have done with some more practice. It was fun though.

I liked the sound effects. And the music was nice too, but a bit repetitive. Like a lot of games I've tried from this jam, it looks nice, and I can see what's going on.

Submitted
Back for the discs
LikeReply
BinadaHDeveloper311 days ago

Thank you. I will check your game : )

Ah so this is how the x-potion is made, huh? Art work was really cool! Music worked well too. The last puzzle was pretty clever, it made you think. Great game!

Thank you for playing. I really appreciate.

Really good, i could get through level 3 but i really wanted to keep playing

Feel free to check my game

This is the coziest game I've played

Pretty fun game. I like the boxes mechanic. It would be cool if there was more you can move around. the Witch theme is fun too :)

Thank you! I will definitely add more interactable objects in the future.

Nice game. I liked it a lot. The game felt a bit slow. I think you should automatically pick up the items you parkour to. Otherwise perfect game.

Check out my game here: https://therealgoatmeal123.itch.io/honeyrun