Hold off the robot spinvasion for as long as you can!
Submitted by joshyide — 1 day, 17 hours before the deadline
Add to collection 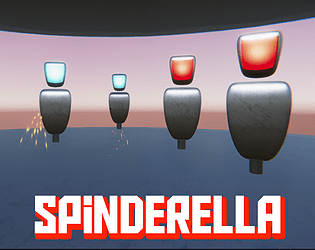 This is a really slick game. My only feedback is that on a laptop with trackpad it's a bit hard to swivel and keep up. Being able to spin with arrow keys or some other mechanism would have been really helpful. Awesome job here.

nice, i must say, the game is fun, visuals, feel and audio, they blend togather, and it implements the theme of the game jam, nicely.

good job, i believe this game has potential too it can easily become a fun viable commercial product with a year or so of work. at least, that is how i feel good job. i liked the menus affect too.

but i hated the long studio intro :D

I'm super impressed that you made everything from scratch, that's definitely a lofty goal and I think you did a great job with it. As for some feedback, the biggest thing I think would help in the difficulty area would be adding some type of enemy indicator to know where they're spawning in at. I felt like it ramped up pretty quickly and there usually wasn't enough time to cover both sides effectively. Maybe a little mini map?

Awesome work, hope to see you expand on it!

A mini map is a fabulous idea.  I had actually written that down at the start of the jam but decided not to include it in the scope due to the time limitations, but I forgot about it until you mentioned it just now.

Really appreciate you taking the time to play and write some comments.

Very nice work.  I thought it was a pretty good concept with nice appeal.  I think it would make a good sit down VR game.  As for recommendations on improvements, here's a list of things I would consider picking a thing or two out of:
1) Keyboard controls -- due to the nature of the game, you're repeatedly needing to lift your mouse up and bring it back to the other side of your work area so you can continue spinning in a certain direction.  Arrow key controls (or any two keys really) would alleviate that and allow you to use the mouse in a more traditional FPS-style.

Also, perhaps spacebar as an alternative button to "fire"?

2) Perhaps a few "weapon" models with various rates of fire?  You could possibly use varying reload speed to add new complexities -- I'm not 100% sold on this idea, but it warrants thought.

3) Powerups of a sort would be worth considering.

4) Maybe extra "push" for scoring headshots?  Admittedly, I spammed and just shot from the hip like a damned wild-man, so maybe this is already in there and I didn't notice it :-P

5) Lastly, consider a small tutorial and/or an "How to play" explanation on the main menu.   The main benefit of this was that it took me a second to realize there was more than one spawner and I had targets ramming me in the posterior. :-)

Thank you so much for your thoughts!
I'll just respond to a couple :)

1)  Good thinking – I got my partner to do some playtesting and she had issues with the sensitivity of the mouse controls, so I think given more time I would definitely implement an options menu that lets players choose different controls styles and change the sensitivity.

2 & 3)  I too thought this in hindsight.  I think the game needs more gameplay elements, and varying weapons, powerups and enemy types would be the next thing I'd add.

4)  Indeed, headshots do actually give you extra push!  Also, shooting an enemy in the "leg" gives even MORE push.  Great feedback, because if this wasn't intuitive, I guess I need to make it way more obvious and/or add a little explainer/tutorial.

Thank you so much for your thoughts.  Really appreciate you taking the time!!

Nice work.  I thought the concept, visuals, and menu were all great.  I'm glad it was not a VR game cause I'm sure the constant spinning would make me sick.  Great execution on the theme of spin!

Submitted
Stanley and the Clocktower Caper
LikeReply
joshyideDeveloper2 years ago(+1)

Thanks Iconoclast!
Would love to hear any thoughts on what could be improved?  In hindsight I think it needs many more gameplay elements.  Perhaps powerups, different enemy types, etc.