An adults only carnival crawling with creative attractions
Submitted by Quan Zillan (@QwaxiLixard) — 7 minutes, 33 seconds before the deadline
Add to collection 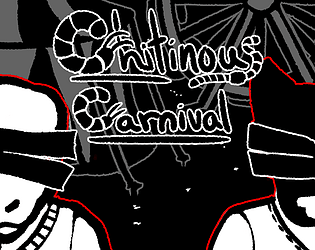 Early work
On Feb 1st, Chitinous Carnival was a loose set of idea and a project name. All the code and illustrations were made during the jam. The music is CC-BY created by One Man Symphony. However, the seeds of this idea started in November:
- The idea for the setting: https://twitter.com/QwaxiLixard/status/1326037869262229505
- The point and click game idea: https://twitter.com/QwaxiLixard/status/1332193948669005824

Play: This I think is the one major area where the game is lacking, and it's just because the text choices are a little hard to make out, especially when they're just ">>". They blend in a little, they're smushed up against the corner, and when there's multiple there's no spacing between them. I'd rather have had the low panel used for displaying the dialogue/dialogue choices, instead of reminding you of your location, since the location function doesn't seem very useful, at least to me, especially because you have the sidebar to remind you of your ticket amount. I don't like that the shooting minigame wasn't optional (although that's just because I accidentally reloaded the page while I was going back to check some stuff), but it was constructed really well, and when I played it because I wanted to it was very engaging. I thought the stats were silly until I realized what they were and how the game utilized them, and I'm looking forward to seeing how they're implemented in a more expanded version.

Aesthetic: I do have to bug you about the game window size, it's obligatory for anyone whose game I had to zoom out on to fit in my browser window. Accessibility and the like. In addition, the cross-thru-black transition being used for everything was a little overwhelming- I think you might want to pick a less jarring one for moment-to-moment stuff, and keep the current one just for scene or setting changes. That being said... this game is so stylish! The limited color palette keeps it spooky even when the settings are detailed or silly-looking, and the art itself is very good. The visual tone is consistent and well-established.

Sound: Between the last game I rated and this one, I accidentally nudged my headphone jack out of place, so when I loaded this up, the sound started playing out of my computer, and I realized I'd had my headphones volume muted for since I sat down to start rating games tonight, and had to go back in a panic and check the others I'd done tonight to make sure they didn't secretly have sound I didn't know about. (Luckily, they did not.) Both music tracks in the game are phenomenal. I am absolutely terrified to mention the fact that there are very little sound effects, because that means you might add sound effects, and then this experience would be on another level such that I might have to never play it again for fear of nightmares.

Narrative: A couple writing mistakes here and there, but for the most part, the writing is sound. Most of the text is either dialogue, which is done well, or descriptive text making up for what the backgrounds can't show you, which is also done well. The premise, while not making sense by realism's rules, is pretty fun.

Kink: Before I go into this, I just want to say that I'm not trying to insult the other entries at all ^^'. That being said... holy shit, finally something INTERESTING. I'm not into this at all, and it actually made me genuinely squirm a couple of times, since I went back to see both scenes. It was almost like a horror game than a lewd one on that one route. Which is cool! There's something to be said for games like this that can provide a pleasurable experience to one group of people and a horror/thrill-like experience to others. It's way far out there, which is what this category is for. Full marks.

Harmony and Novelty: This is more of a technical category, and in this entry specifically, they work together in an inverse way- while the way the game window is set up and the way the stats are displayed and used is very novel, the game isn't long enough for me to get used to the interface, so it still seems a little awkward.

Final Thoughts: I like the name. I'd like to be able to click to speed up dialogue. Also, I accidentally hovered my cursor over 'Luck' for a second while I was looking away from the screen- when I looked back, I moved my cursor, so I saw the pop-up box for a split second, and until I figured out what it was, I was like 'did. did the player character just call me a cuck through the fourth wall. why. how did they know i was looking away' sdlfkjsg

Submitted
You Make Me Lovesick!
LikeReply
Quan ZillanDeveloper1 year ago(+1)

Thank you for the feedback! I thought I had managed to fit it correct for a 720p screen, but my spacing and estimation was off.  I don't know how I'd fix that one cause I use that resolution as a base for all my assets. I'll definitely make sure to get some of those UI issues squared away. I had planed to use the bottom section of the screen for status updates. But, then time constraints. The UI was something I arranged and rearranged multiple times.

I played it in the browser instead of downloading it- it'd probably fit fine if it was in its own window, and the fullscreen button worked fine as well, so don't stress out too much about it slkdfjslkdf

Wow, it just oozes style! The music is such a good fit for the art direction.

The friend's spin animation is the only thing that's working against the immersion, it's a little too silly for the atmosphere. I would also really like to see the protagonist's portrait react to everything that happens to highlight the overall tension. Everything else is really on-point for the type of game you're making.

I couldn't resist the temptation once I realized I could make him spin instead of just describing it. But, thank you!

Wow! That's a lot you got done! I love the hilarious portion with the glory holes! Good creativity, and good work! The only thing needed is more, but with a game jam, that's being selfish :)

Good stuff! Loved the aesthetic and the shooting game was challenging but fair and fun! Kink stuff was also hot ;)

I love the blend of papercraft vibes and 2-bit art; it's very evocative and an efficient choice given the time constraints.  The aiming mechanic in the shooting game was novel and fun.

I was a little put off by the wobbling text at first, but the whole aesthetic created by the art and music quickly sucked me in. Love the spooky carnival vibes, enjoyed the kink quite a bit. Hope that it continues in a direction where the main character enjoys this stuff happening.

Thank ya! The shader has a setting to turn it off,;I just need to build a settings screen. Settings's always ends up being the last-in-first-out.  Also, I definitely want a path where the player can just let the character enjoy the carnival. A lot of games with corruption themes just go "Game Over, Bad Ending" when you don't avoid things. However, I definitely have a lot of planning to do.

Of all the games I checked out, this is the first one that made me  think " I need an adult!! " XD Haha. But well made - the aesthetic is nice, the setting is curious. : ) The idea / kink, I think I have heard of it before, somewhere. But yeah I am too squirmy and scared of crawlies to even finish it... ^^;
Even tho you made it really good.

Oh PS the shooting game mechanic is great too. :)

Okay, that's a big score for kink! I really found this cool, the whole aesthetic of the thing... Art and Music... That nicely-walked tightrope between horror and pleasure... Descriptions were great too... Will stick with me for a while, and I do mean that in a good way! :)