You exit quarantine to find your ship empty. Almost...
Submitted by matsuringo, NoAverageJ0E, TurloughMcHugh — 3 minutes, 30 seconds before the deadline
Add to collection 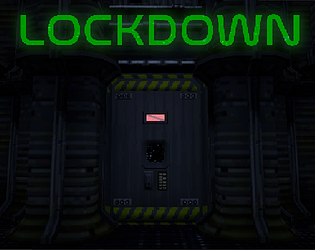 Really loved this one! Sci-fi themed action/survival horror games are my jam! The monster encounter was damn scary and the noises it makes when it roams the ship really kept me on the edge. I beat it on easy, to compensate for the fact that I needed to Alt-Tab out of the game every 20 seconds to look at the map, because holy damn, it's impossible to locate where to go without it. I strongly recommend you put it in the game in case you haven't planned to do so.

That's the only major issue I'd say deserve a priority fix, because the rest of the game was top notch! I'm fond of the low quality graphics you went for, reminds me of System Shock 2, and the stealth mechanic kept me crawling in the ship like a scared animal watching out for every suspicious noise. The story line was well explained and executed and I always knew what I had to do. And the fact that you get to obliterate the monster at the end was really cool, although it could be made more climactic if you triggered the monster to come to you as soon as you obtain the big gun!

I was getting some Alien vibes right from the start! Then when I saw the creature for the first time and immediately proceeded to shoot at it, I was pretty surprised to see it drip acid blood all over the place :D From then on, I was incredibly paranoid cos I could hear the SFX of things in the vents and stuff x3

Definitely quite unsettling! Cool creature + SFX that freaked me out :3

Thanks for giving it a try! I'm glad you got the right kind of vibe and enjoyed the SFX, we're really please with how those turned out :)

Probably my favorite entry so far. Love the Alien vibes and the monster was cool as hell. I love that it drops blood on the floor when you've hit it. Awesome game.

Thanks for the comment! Not sure what to say, I'm really glad you enjoyed it. I'll give your game a try when I've got some time in the next day or so :)

LikeReply
iwanPlays1 year ago(+2)
I tried this and 17 other entries from the scream jam. Lockdown is #10 in the video order. Cool atmosphere but boy do I suck at keeping a map of labyrinths in my mind, especially multi-level ones.
LikeReply
NoAverageJ0EDeveloper1 year ago

Hey, I watched your video this morning - made me chuckle a few times. Nice to see this kind of format for jam games. It's a shame you didn't get to see more of what the game had to offer - but I understand. Sadly one of the areas that fell short due to time was adding in more signs and this means some people get (rightfully) fed up earlier than others. Even so, thanks for checking it out. If you ever want to see what you missed, go to the dark spot behind the main terminal to find the A.I core. But even then, signs are sparse afterward so I can't promise you won't have the same feeling then.

This is a pretty strong entry, but I do share the issues the other commenters have brought up. I think if you varied up the lighting, added some new textures and some signs it would help with navigation. The first weapon sounded like a stapler but it made sense in the context of the game. I found actually hearing the creature on floors above & below very concerning but I feel like muffling the sounds when this is the case would make it a little more obvious compared to times when it's on the same floor as you. I didn't find the lack of ammo to be an issue because I didn't encounter the monster enough either.

Also, I didn't find the AI core immediately as the entry door was covered in darkness, compared to the other doors. When I did enter and get the keycard I didn't notice because I had picked up so much other stuff. I actually restarted the game at this point because I thought I had somehow bugged it out. It was only when I came back in for the second time I went "What's that book thing there?" and realized what it was.

I should start off by saying that this is one of the best games I've played in the jam so far, and I wouldn't be writing this long of a comment if I didn't enjoy the game.

Really enjoyed playing this! The first time I tried it was late at night and I got too spooked after the first encounter with the alien to continue, but the second time I was able to make it a bit further. I thought the sound design was quite good, and the pacing and storytelling through HUD popups was tense as well. I did have some gripes though.

First, the map was way too confusing. Most of the corridors looked the same, and there wasn't a very cohesive system to room placement. I think this is best illustrated if you imagine having to actually live/work on that space ship. It would be hell trying to get from one place to another, and you would probably get lost easily. I think this could be remedied with varied corridor sizes, shapes, colors, etc; a more practical layout theme that feels realistic; and possibly a minimap or HUD indicator for where you need to go.

Second, I think that the limited quantity and effectiveness of ammo is too much of a challenge for the player, especially with the very limited alternative options available. Perhaps there's a lot more ammo that I didn't find during my forays into the game, but it felt like as soon as I ran out of ammo, I was dead in the water. In games like Alien: Isolation with similar limited ammo systems, the games prevent the player from falling to helplessness by offering a multitude of alternatives to shooting wildly like stealth and distraction. With this, as soon as I ran out of ammo it was "game over man."

Other commenters also shared opinions that I agree with on other problems in the game.

I'll wrap up by saying that I'm only giving this much criticism because I enjoyed the game, and I think it's worthy to take time and effort to offer this amount of feedback.

Wow! Thank you for taking the time to give such thorough feedback, it's a real pleasure to read through and analyse. I'm so pleased that you liked the game! It isn't perfect, but we are really quite proud of it :)

As far as your gripes, I feel they are most definitely justified.

The map, to start off, is certainly a labyrinth. I had hoped to signpost things better, but this ended up not getting done in time. I hadn't considered the coloured corridors idea though, which is a very good one! I had a thought on the final day (much to late to implement) whereby the player holding the spacebar would bring up an map view of the ship/floor they were on. Also, going waaaaaay back to the planning stage, the rooms were supposedly going to be rather different - a mess hall, dorms and other rooms with various functions and visual differences. This would prove, of course, optimistic. As such, the level we are left with is undeniably obtuse :/ But hey, we live and learn.

As for the ammo, we always wanted the player to feel like they were in danger of running short. The hope being to encourage greater caution and levels of terror. Though, from reading your comment just now, it may not have been clear enough during play that the alien can be evaded if you can break line of sight for long enough and stay quiet. We took a lot of inspiration from alien isolation when making this game (natually!), but never got so far as to add a noise/distraction device into the game - though looking at it now that would have been perfect...

Thanks again for your comment - it's been a highlight of my day! I'll be sure to check out your submission when I have some time :)

No problem! Again, I really enjoyed it.

I really liked seeing the similar inspiration sources between our two games. I also drew inspiration from Alien:Isolation, but ended up with a very different game. While I did gripe about your game's labyrinth-like setup, I also admire it. In my game, for example, I really struggled with adding variety and avoiding uniformity/symmetry in the levels. A lot of my designs started off as just squares, and I didn't really start expanding my polygon repertoire until around the third level. With your ship design, I actually felt like a rat in a maze. I think it really would have worked with a little more direction and some more room for player error. Without saves or checkpoints, it felt like every wrong turn was precious time/ammo wasted rather than a chance to learn the level. This also extends to the alien as well. While I really wanted to try different tactics, I knew that if I screwed up I would have to restart, which made me stick to the more tried-and-true tactic of shooting everything that moved (or crying in a corner once my ammo ran out).

Some good tension building here! I find the mazelike level designs of games like these really frustrating, especially when all the walls and doors look the same. When I died after collecting two cards, I really wasn't motivated to go hunting all over from the beginning again. In a future version, I'd be interested in either a checkpoint system or some kind of visual elements that could help in tracking things down. The golden splats leading to the armory are a great example. Maybe I just didn't "get" the map, but I didn't pick up on any kind of logic to the layout. When I was looking for Cargo room 1, I certainly didn't feel like I was getting 'warmer' when I found Cargo room 2. But all that aside, I REALLY liked the storytelling of the game. You communicated the narrative with subtlety and a lot of show-don't-tell, and that's a really underutilized way to set up a scenario. Good stuff!

Thanks for giving it a try & for your feedback! I'm really glad that you made mention of the storytelling - having the environment reveal the situation to the player was something I was really going after on this project. The level design/layout is undeniably confusing, an unfortunate casualty of the limited development time. I had hoped to squeeze in more comprehensive signs to give a little more guidance to the player, while also still having the ship feel like a rat-run. Thanks again!

Brilliant. Gave me some proper scares, even without the gun. At some point, everything interactive (Like doors, alien, etc) because invisible to me so I had to restart the game, this may have been because I accidently turned on debug mode while trying to work out how to heal.

Thanks for the comment, I'm really glad you liked it. Not sure what might have caused that to happen.. Seems we may have some fixing to do!